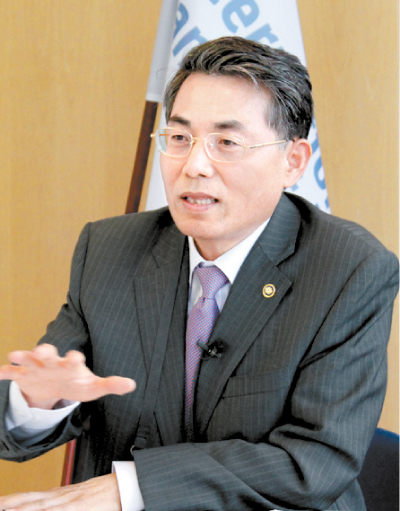 LEIPZIG, Germany - As the government tackles the recent surge in demand for new mobility services, the vice minister for transport said Korea’s take on new mobility could trump existing service models such as those established by Uber.

During the International Transport Forum (ITF) in Leipzig on Wednesday, Vice Minister of Land, Infrastructure and Transport Kim Jeong-ryeol discussed the government’s efforts to introduce mobility services and to find middle ground between existing and new industries.

In light of the heavy opposition from taxi drivers against new mobility services, bills are currently being reviewed to implement a monthly salary for taxi drivers and an agreement was reached with the industry earlier this year to introduce a new platform that creates more business for taxis.

“If we place new mobility services on taxis, they could be more competitive than the Uber model [in Korea] and could develop to become a good model globally, said Kim.

“Overseas, there aren’t a lot of taxis, so the transport demand is met through Uber using ordinary vehicles and other costs such as fuel being shared,” explained Kim, adding that Korea’s taxis account for higher public transportation demand compared to other countries.

The vice minister pinned his hopes on reform to create a successful service model.

“If new laws are passed and regulatory reform plans are implemented, mobility innovation will rapidly develop,” explained Kim. “Just adopting the Uber model in Korea doesn’t make them competitive, there has yet to be reform so the [service] model is able to survive.”

Meanwhile, Kim also warded off criticism that the government is being swayed by taxi and bus drivers in recent issues such as taxi strikes against carpooling services and wage negotiations with bus drivers.

The issues led Transport Minister Kim Hyun-mee to cancel her trip to Leipzig, where she was supposed to preside over the conference. Vice Minister Kim Jeong-ryeol attended the forum in her place.

The vice minister remained upbeat about the ongoing talks with taxi drivers despite lingering criticism that they have yet to achieve substantial progress. Kakao Mobility’s carpool service failed to launch earlier this year amid opposition from taxi drivers.

“We achieved an agreement that there needs to be improvement in taxi jobs through technological innovation and also improving working conditions such as implementing a monthly salary,” explained Kim. “There are currently related laws that have been proposed and discussions are ongoing.”

“In order to minimize the impact [of the proposed laws], the government is considering a grace period of two years for provinces and areas with many taxis and one year in Seoul and other metropolitan cities,” said Kim. “For areas that cannot afford to implement a monthly salary, they will be exempted and instead will utilize new mobility services.”

Kim, however, acknowledged limitations in implementing such changes with the National Assembly currently deadlocked amid conflict between ruling and opposition parties.

“Unfortunately, with the National Assembly currently at a halt, there hasn’t been much progress,” the vice minister said, adding that the proposals will likely be passed swiftly once the legislative body reopens.

“I think that the proposed bills are at a stage where the ruling and opposition parties can make an agreement if they are passed … regulations surrounding taxis will be overhauled in order to introduce a new system.”

Meanwhile, the vice minister hailed the government’s efforts in bus driver wage negotiations last week that prevented a nationwide strike but also led to fare increases in some regions.