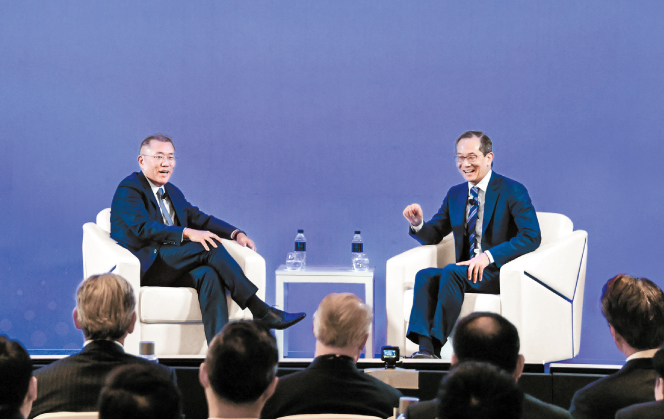 Hyundai Motor Group Executive Vice Chairman Euisun Chung shared his plans and outlook for the automaker at an event hosted by The Carlyle Group, a Nasdaq-listed private equity company.

The discussion was held in Seoul and moderated by Kewsong Lee, co-CEO of Carlyle. About 180 representatives from the local financial industry attended the event.

During the conversation, Chung insisted that the carmaker is not so much competing with other companies as it is focused on “what customers want.” To cater to fast-changing customer needs, Chung said the plan is to shift the emphasis from auto sales to services.

“Younger generations are not as keen on the idea of buying cars or even getting a driver’s license, so we have to shift our business to services,” he said.

He did not provide details, but Hyundai Motor and Kia Motors have made investments into India’s Ola and Singapore’s Grab.

Chung said responding to changing market trends is one of the biggest challenges for him as top manager of the company and stressed the need to boost investment and increase efficiency in research and development. He also said the group needs to keep gaining technology through partnerships.

Chung said the company plans to test self-driving cars in new and varied scenarios, not only on well-established courses in Silicon Valley, adding that his focus is to maintain quality in future cars.

“Technology can make driving more convenient, but malfunctions must be minimized,” he said. “A car cannot reset every time, like a phone or a PC.”

He said he will foster a flexible and flatter corporate culture to bring the proposed changes and innovation to reality.

“Hyundai Motor Group’s corporate culture will become more like that of start-ups,” he said. “We will give more autonomy to our employees so they can make their own decisions. We are making our utmost effort to improve communication within the organization.”

Comparing his leadership style with that of Chung Ju-yung, his grandfather and founder of the group’s mother company in 1947, he said while his late grandfather showed strong leadership that made everyone in the organization follow his lead, he will focus more on sharing ideas with employees, even if the process is slower.

On the future of the group’s governance reform, he said, “We are considering many options with the aim of pleasing our investors. Investors and the company ultimately share the same goal: to maximize profit.”

While Chung’s father, Chung Mong-koo, is still chairman of the group, Euisun Chung has been more visible at key events after being promoted to executive vice chairman in September last year from being vice chairman of Hyundai Motor.