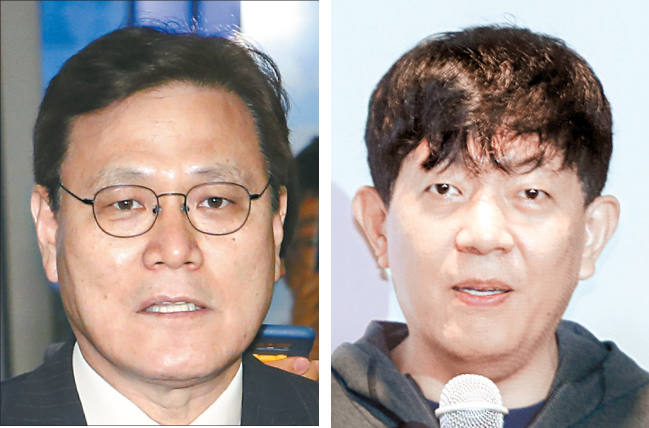 A war of words between a top financial official and a mobility icon seems to be dying down only days after it started.

A Facebook post by Socar CEO Lee Jae-woong indicates he is in agreement with comments made earlier in the day by Financial Services Commission (FSC) Chairman Choi Jong-ku. The chairman said that both the government and mobility start-ups should take responsibility in helping traditional taxi companies deal with the transformation to the new economy.

The two have been trading insults for a number of days as protests against Tada, which is owned by Socar, heated up and following the death of a taxi driver who immolated himself as an act of defiance against the mobility upstarts.

“FSC Chairman Choi Jong-ku made a good remark this morning,” Lee posted on his Facebook page on Thursday, several hours after the FSC chairman gave an opening speech at Korea Fintech Week at Dongdaemun Design Plaza. “He nicely outlined the argument that I have been making in the press and on Facebook.”

While noting that innovation is important in society, he pointed out the need to face the reality that in the process, there will be industries and people who could be hurt.

“It is the government’s role to help the soft landing of traditional industries and those who work in such industries,” Lee said. “And innovative industries should also participate.”

He then said innovation cannot be accomplished only by one person or a single company but rather through the efforts of society as a whole.

He also thanked the FSC chairman for taking an interest despite not being the minister directly in charge of the taxi service industry.

“There is no winner or loser in innovation,” Lee said, adding that the ultimate goal is to let all of Korean society win.

Until early Thursday morning, the feud between the two seemed to be spiraling downward as the FSC chairman expressed his discomfort about comments made by Lee on his Facebook page Wednesday.

“I don’t think the issue I have raised deserves a sarcastic response,” Choi said during a press meeting held after attending Korea Fintech Week. “The point of the comment I made yesterday was the need to pursue the balance between innovation and inclusiveness.”

He said the government, while supporting innovation in the private sector, must protect livelihoods by properly managing the social impact of such innovative changes.

“I was pointing out that even innovative businesses should take responsibility in trying to minimize conflicts,” Choi said.

During his opening speech on Thursday, the FSC chairman raised the need to protect those negatively affected by innovation, such as those losing jobs due to the changes.

“It is equally important to look into the shadows cast from the light of innovation as much as supporting innovation,” Choi said, adding that society needs to be respectful and more compassionate of those pushed aside by change.

The FSC chairman said he had to make a comment on the issue despite the FSC not being the main government department in charge of taxi services as his organization has been actively engaged in work related to innovation.

When asked if he has any intention of meeting face to face with the first-generation start-up businessmen, Choi said, “I’m not sure if it will happen.”

The war of words started when Choi said he thought Lee was being rude and selfish after Lee made a post on the death of the taxi driver. Lee responded, “Is he trying to run for the general election?” raising questions on the motivation behind the sudden involvement of FSC chairman.

Lee last week, while posting condolences following the death of the driver, also said the death should not be politicized or used to push an agenda. He also expressed interest in engaging if the taxi community is willing to end its demand that it will only come to talks when Tada is completely shut down.

Lee has been vocal about his frustration with the government’s lack of interest in innovation.

Lee is revered as one of Korea’s leading first-generation start-up entrepreneurs - on par with Naver’s Lee Hae-jin and Kakao’s Kim Beom-su. He founded Daum, which was acquired by Kakao in 2014, and served as the co-head of the Ministry of Economy and Finance’s Innovation Growth Center. But in December he suddenly quit due to frustration on the lack of progress.

He even criticized Finance Minister Hong Nam-ki for having no will to lead innovative growth.