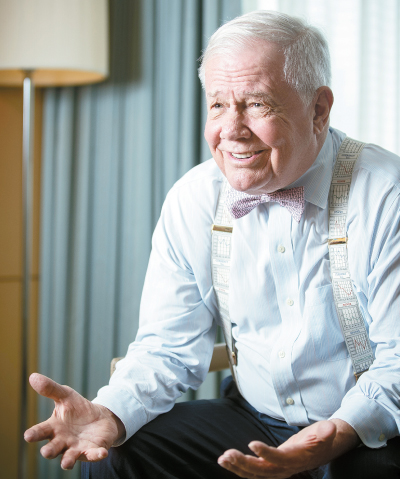 Jim Rogers, a world-renowned investor similar to Warren Buffett and George Soros, is garnering attention as he recently published a book, “The Future of Japan and The World That Will Be Read through the Flow of Money,” that is available in Japanese. The book became the No. 1 best seller on Amazon in Japan, and is now available in Korean.

After majoring in history at Yale University and philosophy and politics at Oxford University, he became a legend on Wall Street after recording rate of profit at 4,200 percent for a decade with global investment company Quantum Fund. Afterward, he taught theory of finance at Columbia University. Expecting that the future will be dominated by Asia, he currently works as a financial commentator based in Singapore.

In his book, Rogers argue that in 50 to 100 years Japan will disappear. He said that Japanese economy is just a show and added that someday Prime Minister Shinzo Abe will realize that he had ruined Japan. On the other hand, he predicted that Asia will be the center of the world, and that Korea will be the happiest country among Asian countries. On Korea’s economic policy, Rogers said that he values President Moon Jae-in’s income-based growth policy but is doubtful of its effectiveness since no specific solution exists.
The JoongAng Ilbo met Jim Rogers at the Lotte Hotel in Jung District, central Seoul.

During the interview, he emphasized that Japan will decline as its population is decreasing and its debt is increasing whereas South Korea will encounter a new frontier after unification. At least in a rhetorical sense, he said that he is willing to invest all of his assets to achieve the unification of the two Koreas. He said that North Korea has a high birth rate, and if the 38th parallel disappears, Korea’s population problem will be solved. He also emphasized that regulations in Korea are so strict that it is hard to invest, and he expects President Moon to alleviate this problem.

Below are edited excerpts of our interview.

Q. What was the Japanese reaction to your book?

A. Japanese bought a lot of them. I think because they were interested that someone was finally telling them the truth. To me it is very evident. The debt is going up and you subtract the population, and the population is going down and it is a disaster. Japan is waiting for a disaster to happen. I think they wanted to know that.

You used the expression that Japan would decline and disappear in 50 to 100 years. Is it a rhetorical device to send such a message? Do you really think that is possible?

What do you mean I really think? It’s just a simple calculation. You add the debt, you subtract the population. Unless somebody pays off the debt or has babies or has immigrants very quickly, [this problem is highly likely to occur.] It’s just a simple fact.

They have fabulous quality. They probably have the best quality in the world. The best Italian restaurants in the world are in Japan. They do everything very well. They have a good work ethic. But, if your population is declining and your debt is going up, it doesn’t matter if you make the best cars in the world. Eventually, there’s nobody left to make the cars.

Korea is suffering from some of the same negative factors that Japan has experienced. So if Korea is not unified or at least fails to have peace with North Korea, then would Korea disappear in 50 to 100 years? Will we face the same fate?

What you have going for you is that the 38th parallel will disappear soon, and when that happens, you have a whole new frontier: North Korea. North Korea does not have a lot of debt. Who would lend money to the Kims? So they don’t have debt, and they have a cheap, disciplined, educated workforce with a lot of natural resources. Japan does not have a frontier or cheap labor.

Japan is a very expensive place to do business. But you will have a new cheap labor force with lots of natural resources on the Chinese border. And you have management ability. And the North has a lot of females [to give birth to babies], and you need females in the South [to solve the population problem].


South Korean conservatives will be very shocked by your argument because they think that we are still not ready to be independent financially.

But South Korea is one of the 10 largest economies in the world now. This is not a poor country. They should do their homework. This is not 1959. This is 2019.

When and how will Korean reunification occur? Do you have some fact-based argument?

The Japanese are against it, but China, Russia and the two Koreas for it. It’s going to happen. What will happen first is the 38th parallel will disappear. And once that happens, you’ll have commerce, movement of people and labor again, and that will lead, eventually, to unification. What date, it doesn’t matter to me. The 38th parallel is the most important. The problem, of course, is the American army.

The American army does not want to leave. If you look at a map, this is the only place in the world where the Americans can have troops on the Chinese and the Russian border. You are going to be in the middle of the war. You got troops here, so [if a war between the United States and China or Russia takes place,] Russia or China is going to bomb South Korea first unless you do something about the American army.

I would go to the 38th parallel and meet Mr. Moon and take down the border guards and have a K-pop concert. And I will open the border and let people come and go and open the economy. Mr. Moon needs to deregulate this economy.

Korea is one of the most regulated economies in the world. Mr. Moon is a smart politician, but he needs to do more to open the economy and open the 38th parallel.