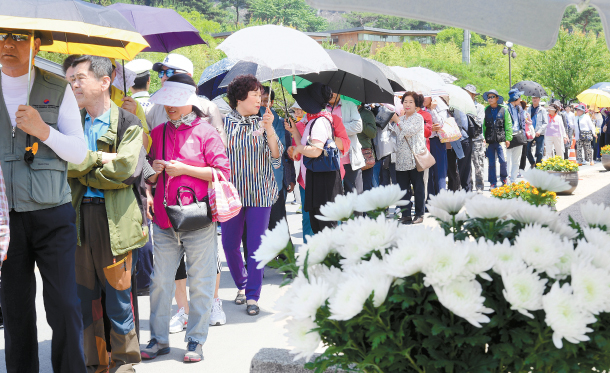 Visitors wait in a long line to enter the venue for the memorial ceremony of the 10th anniversary of the death of former President Roh Moo-hyun in Bongha Village in Gimhae, South Gyeongsang, on Thursday. [SONG BONG-GEUN]

A commemoration of the 10th anniversary of the death of former President Roh Moo-hyun took place Thursday in his rural hometown, and high-profile politicians, top government officials, former U.S. President George W. Bush and over 13,000 supporters of the late leader attended.

“Your election on Dec. 19, 2002, symbolized the end of regionalism,” National Assembly Speaker Moon Hee-sang, who served Roh as his first presidential chief of staff, said in his eulogy. “There are three goals you have not completed. An era of Northeast Asia with peace and prosperity, democracy for the people and a society with balanced development.

“We will again march toward your dreams,” Moon continued.

Roh served as president from 2003 to 2008. He committed suicide on May 23, 2009, 24 days after being questioned by prosecutors about a bribery scandal implicating his relatives and 15 months after leaving the Blue House.

Prime Minister Lee Nak-yon praised Roh for giving hope to ordinary people in his speech. “The Moon Jae-in administration is working hard to realize your dreams,” said Lee, who served as spokesman for Roh when he was president-elect. President Moon Jae-in, Roh’s closest friend and political ally, did not attend the ceremony. He attended a memorial in 2017 and promised not to attend any more until his presidency is over. 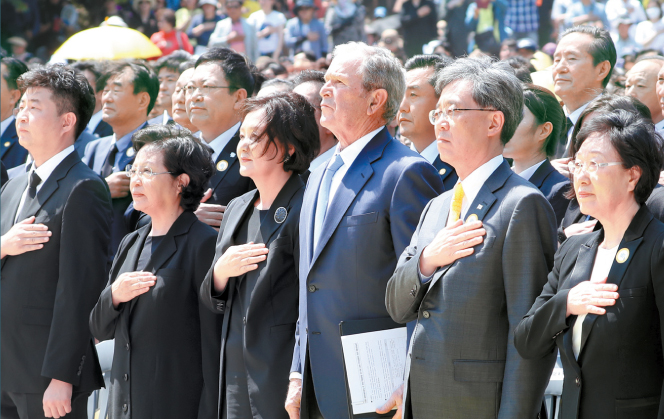 Former U.S. President Bush presented a portrait of Roh that he painted himself and delivered a speech. “I painted a kind and sympathetic man. I painted a man who respected fundamental rights of all citizens, and today I pray that his vision for human rights in Korea will extend north across the border,” Bush said.

He said Roh was a leader who did not hesitate to speak on his beliefs. “We may have had some differences, but no disagreement ever outweighed our shared belief in the importance of the U.S.-South Korean relationship. And we worked hard to cement that alliance,” Bush said.

Earlier in the morning, President Moon met with Bush at the Blue House. “Your participation in the ceremony to mark the 10th anniversary of Roh’s death symbolizes the soundness of the Korea-U.S. alliance,” Moon told Bush during a 45-minute reception.

The Korea-U.S. free trade agreement and six-party talks to denuclearize North Korea, supported by Roh and Bush, played a key role in the alliance, Moon said, adding, “I and U.S. President [Donald] Trump are closely cooperating to continue the spirit and develop the alliance into a greater one.”

Bush was Roh’s counterpart throughout his term. They had eight bilateral summits.

While chairmen and floor leaders of all political parties attended the memorial service, the conservative opposition Liberty Korea Party (LKP) sent a relatively low-profile delegation. It was led by Cho Kyoung-tae, a former Roh ally and a four-term lawmaker who left the Democratic Party to join the LKP in 2016.

“[LKP] Chairman Hwang Kyo-ahn should have attended the ceremony, but he is currently having a ‘livelihood struggle’ campaign around the nation,” the LKP said in a statement. “So, we decided to sent a delegation led by Cho to express our respect.”

Over 13,000 mourners from around the country descended on Bongha Village to remember the late leader. Most of them wore yellow hats, distributed by the Roh Moo-hyun Foundation, the organizer of the ceremony. Yellow is the symbolic color of Roh and his supporters. Many of the mourners wore yellow T-shirts.

The organizer placed 3,000 chairs for the visitors, and they were quickly filled. According to the foundation, 13,736 mourners came to Bongha Village as of 2 p.m.