Happy Gilmore they may not be, but a growing number of players on the KPGA Tour have started driving their balls much further this year. 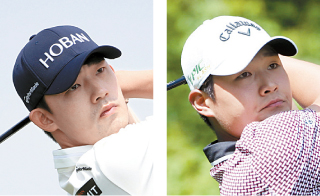 As of Friday, seven players have an average drive over 300 yards. Kim Bio hits his drive the furthest, at 308 yards, followed by Kim Bong-sub at 306 yards.

Things have come a long way since 2013. Not only are seven KPGA players driving over 300 yards, but 18 are driving over 297 yards.

This number is expected to go up as players tend to hit their drives further once the weather gets warmer.

Compared to the players on the PGA Tour, Kim Bio hits his drives only eight yards shorter than Cameron Champ, PGA driving distance leader at 315.6 yards.

Kim Dae-hyun was the first player to hit an average drive over 300 yards on the KPGA Tour in 2009. Ten years ago, his average driving distance was recorded at 304 yards.

Then, in 2012, Kim Bong-sub exceeded that number and hit his average drive at 309 yards. During that year, six players recorded an average drive over 300 yards.

Interestingly, the KPGA Tour players’ driving distance has gotten shorter since then. Normally, players gain distance with better equipment, but that hasn’t been the case on the KPGA.

At the beginning of last season, the KPGA Tour’s leader in driving distance was measured at 279 yards, which was similar to the leader on the LPGA Tour.

Although the figure was similar, it wasn’t entirely the same. The main reason behind the KPGA Tour players hitting their average drive shorter was due to an inaccurate measurement method.

As the golf courses in Korea tend to be tighter than courses in other parts of the world, they have more out of bounds stakes, and poor course management often leads to the courses having longer grass on the fairway. Not only that, the holes where the KPGA Tour measures driving distance tend to be shorter or on an uphill, rather than a hole that is wide open.

Due to this, players weren’t able to really cut loose with their drives.

“Starting this year, we’ve changed the holes that we use to measure distance,” said a KPGA Tour tournament official. “Like the foreign Tours, we will be measuring the distance on holes where the players can easily hit their drives.”

“After they changed the holes, it seems like the distance in the official record has gotten further,” said Kim Tae-hoon.

The KPGA Tour will continue its 2019 season this weekend as round 2 of the KB Financial Group LiiV Championship at Black Stone Golf Club in Icheon, Gyeonggi, was competed throughout Friday.

After day 2, Lee Soo-min takes a one shot lead ahead of Kim Tae-hoon at nine under par.