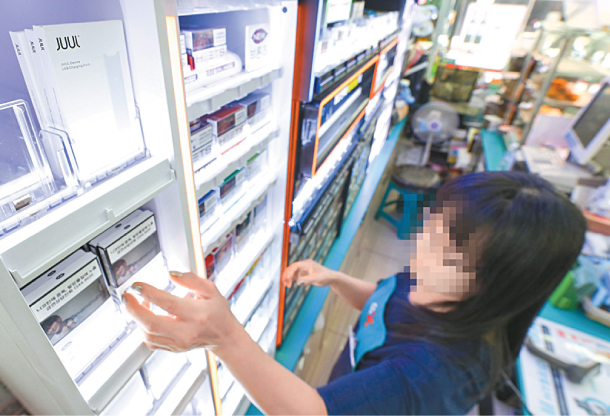 An employee of a GS25 convenience store in Seoul organizes Juul, which went on sale from Friday. [YONHAP]

Dubbed the iPhone of e-cigarettes, Juul is known for its sleek USB flash drive design. Function also sets it apart. Unlike other e-cigarettes in the market, there’s no button for the smoker to press. All one needs to do is take a drag.

The liquid e-cigarette was officially made available in Korea on Friday.

It was released in the United States in 2015 and already dominates 70 percent of the e-cigarette market in the country.

The low tax rate is seen as problematic for at least two reasons. The levy is supposed to be high enough to act as a deterrent on use, while making it too low seems to unfairly burden traditional cigarette companies.

The same issue arose when the heat-not-burn IQOS arrived in Korea two years ago. 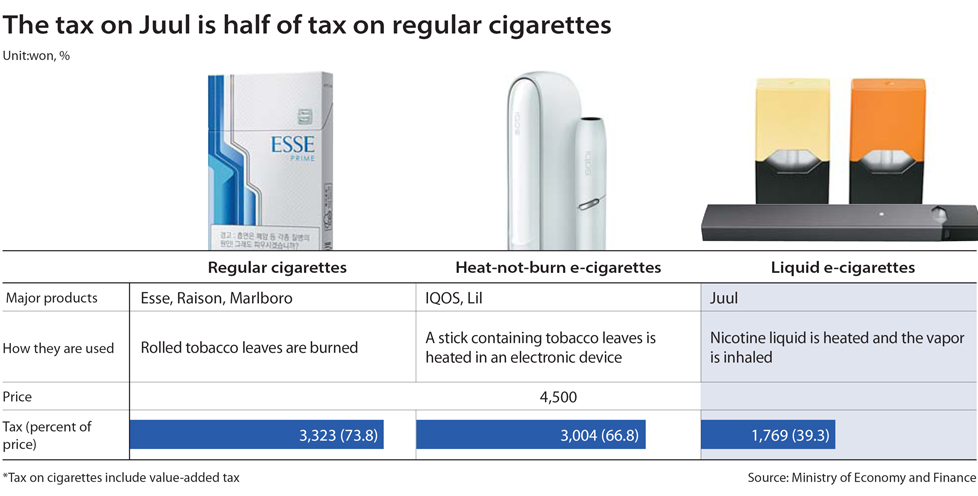 But these three types of cigarettes are different when it comes to tax.

A pod is classified as a liquid e-cigarette, and therefore the government charges taxes accordingly to the amount of nicotine per milliliter. One pod contains 0.7 milliliters of nicotine and is taxed 1,769 won.

Taxes on regular cigarettes, on the other hand, total 3,323 won per pack. The government tax is 3,004 won for a pack of heat-not-burn e-cigarettes.

The heat-not-burn cigarette tax is equivalent to 90 percent of tax for regular cigarettes while Juul is only 53 percent.

“The reason taxes on cigarettes are high is because they are harmful for your health,” said Kang Jung-hwa, head of the Voice of Consumers civic group. “Imposing a different tax just because the manufacturing process and the ingredients are different is not consistent with protecting the public’s health.”

A cigarette company official pointed out that the profit that Juul makes is much higher than for other cigarettes companies because the taxes are so low.

It was much the same when IQOS arrived in Seoul in 2017. A pack of IQOS sticks was sold originally at 4,300 won. But at the time, the government only levied a tax rate equal to half the regular cigarette tax.

After controversy over the low taxes, the government revised the law to increase taxes on heat-not-burn cigarettes. The companies raised the heat-and-burn stick prices to 4,500 won.

“We will first look at sales progress before making a decision,” said an official at the Ministry of Economy and Finance. “But we will review the issue comprehensively, including the fairness and justification of the tax.”

Some have called for a bold revision on taxing cigarettes as the market in new, innovative smoking products is growing fast.

“If we suppose cigarettes are the same, imposing only half the tax on Juul violates the principle of neutrality in taxation,“ said Ahn Chang-nam, a taxation and finance professor at Kangnam University.