Jessica Brun, who was born in Korea but raised in Europe, was finally reunited with her birth family this week after a 15-year journey to find them.
An old couple holding a flower bouquet arrived at the lobby of the North Jeolla Provincial Police Agency in Jeonju, North Jeolla, at around 10 a.m. on Wednesday. They are Brun’s biological aunt and uncle-in-law. Brun was sent to France for adoption 41 years ago. 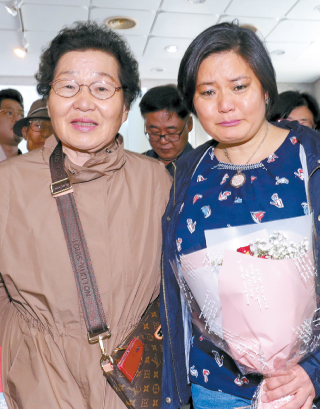 Jessica Brun, right, who was sent to France for adoption in 1978, reunites with her aunt at the North Jeolla Provincial Police Agency in Jeonju, North Jeolla, on Wednesday morning. [NEWS1]

“I thank her [foster parents] for raising her so well and I thank the head [of the department of civil service of the police] and the government for making this possible,” said Brun’s uncle-in-law. Brun was in tears as she hugged the couple.

“Danke,” said Brun to a translator, which means “Thank you” in German.

Brun, 46, had been looking for her biological father since 2005 with her documents and admission papers to the orphanage. The search was in vain. There were almost no records to be found.

Brun became serious about finding her biological father after both her foster parents died in a car crash in 2013. She asked for help to the Korean Consulate General in Hamburg, Germany, and visited the North Jeolla Provincial Police Agency in February.

Brun submitted papers to the family-finding service of the police agency in February, asking the agency to “find her father she parted with 47 years ago.” After three months, Brun received a call saying that they found her family.

Police investigated Brun’s biological family’s whereabouts based on the fact that her biological mother died of blood poisoning a month after she gave birth to her at the Presbyterian Medical Center in Jeonju. With the help of the center and a community center in the area, police were able to find that Brun had an aunt living in the city. They also found that Brun’s biological father passed away in 2009.

According to Brun’s paperwork from before she was adopted, Brun was born at the Presbyterian Medical Center on Feb. 18, 1972. After her mother died, her biological father sent her to an orphanage in Iksan, North Jeolla, as he could not afford to raise a child. Brun spent five years at the facility and was adopted by a family in France through Holt Children’s Services in 1978. Brun moved to Spain when she was 11 years old, and learned that she had originally come from Korea. She was said to have missed her country and her biological father after learning about her heritage.

Brun lives in Germany and works as a ship inspector for DNV GL, a consulting company. Brun is the first woman in Germany to become a ship inspector. Brun said her choice to work with ships was influenced by Korea’s reputation in the shipbuilding industry.

Although Brun was too late to meet her biological father, she was happy to meet her aunt. “This is a miracle,” said her aunt while she held her niece’s hands. On the day of their reunion, Brun’s smile never faded.