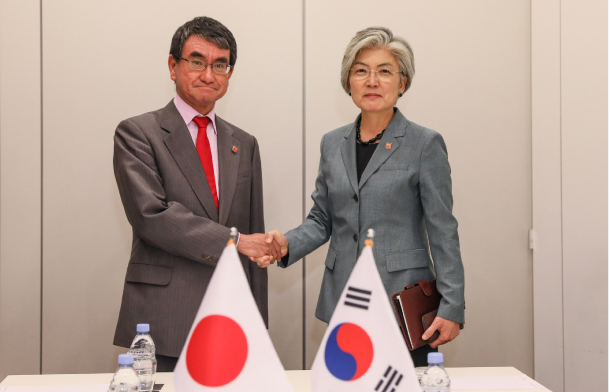 The foreign ministers of Korea and Japan failed to settle a diplomatic row over compensation for Korean workers forced to work by Japanese companies during World War II.

Foreign Minister Kang Kyung-wha met with her Japanese counterpart, Taro Kono, in Paris on Thursday on the sidelines of a Ministerial Council Meeting of the OECD.

The two ministers discussed cooperative measures to denuclearize North Korea and other topics of mutual interest, including the Korean Supreme Court’s ruling on the forced labor victims, the Foreign Ministry in Seoul said Friday.

While they agreed to strengthen cooperation in the denuclearization issue, Seoul and Tokyo failed to narrow down any differences on the forced labor victim issue.

When the Japanese companies did not comply, the victims and their families began legal procedures to seize and liquidate the companies’ assets in Korea.

Japan has been furious about that development, and Kono once again explained the Japanese government’s position to Kang, the Foreign Ministry of Seoul said in a statement.

“The diplomatic authorities of the two countries need to handle this issue wisely to avoid any negative impact on overall bilateral relations,” Kang was quoted as telling Kono in the statement. “Therefore, Japan must work together to heal the agonies and wounds of the victims and the two governments must closely communicate.”

According to the statement, Kang also stressed that “Japan must speak and act prudently.”

The talks started icily when Kono made a strong complaint to Kang in his opening remarks. “I know that the spokesman of the Korean Foreign Ministry had said that there will be no problem if Japanese firms comply with the Supreme Court’s order to compensate,” Kono said. “It is a serious remark that failed to grasp the seriousness of the issue, and such behavior is seriously hindering Korea-Japan relations.”

The Korean ministry spokesman’s remark was made on Thursday in response to Kono’s earlier remark. During a press conference at the Japanese Foreign Ministry on Tuesday, Kono said, “President Moon Jae-in must handle this matter with responsibility as the representative of the Korean government.” He also said Tokyo is losing patience.

Following their opening remarks, the two ministers talked for one hour.

According to Kyodo News Agency, Kono told reporters after the meeting that Moon must come up with measures to resolve the spat before the Group of 20 Summit in Osaka in late June. “President Moon is attending the G-20 summit, so it is desirable for bilateral relations that this issue is resolved before his trip,” Kono said.

Although Moon will visit Osaka to attend the global leaders’ meeting on June 28 and 29, no announcement has been made of a possible bilateral summit with Japanese Prime Minister Shinzo Abe.

According to the newspaper, Trump made the suggestion when he met Moon in Washington on April 11, expressing concerns that strained relations between Korea and Japan would hinder his new strategic initiatives in the Indo-Pacific region to counter China.

The newspaper said the Blue House began measures to improve relations with Japan after the Moon-Trump summit in April. “Korea proposed first a defense ministerial talk on the sidelines of the Shangri-La Dialogue in Singapore in early June,” the report said.

The Blue House also made contact with the plaintiffs in the lawsuits seeking compensation from Japanese firms.

A senior presidential aide said Thursday that the secretary of social affairs coordination met with the plaintiffs, fueling speculation that the Blue House was starting efforts to get the cooperation of forced labor victims to find a breakthrough in the diplomatic stalemate.

The official, however, said the Blue House’s position has not changed, and the Foreign Ministry is still responsible for the issue.