NCT 127 proves it is ‘Superhuman’: Its non-stop global tour shows new album title is also a mantra to live by

NCT 127 proves it is ‘Superhuman’: Its non-stop global tour shows new album title is also a mantra to live by 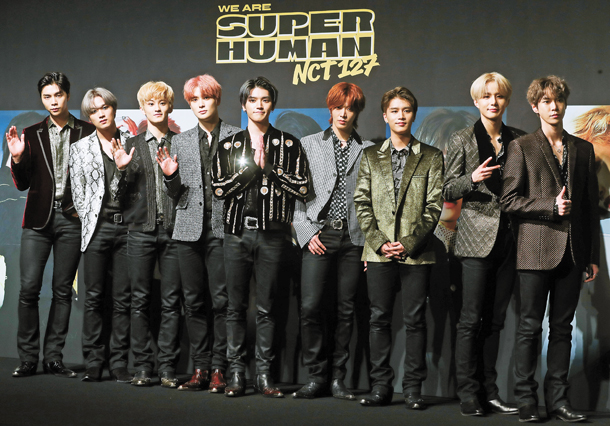 NCT 127 released its latest EP, “NCT #127 We Are Superhuman,” on Friday. The band just returned from Mexico as part of its ongoing “NEO CITY - The Origin” tour. [SM ENTERTAINMENT]

As the title suggests, this new album is all about hope and encouragement.

The title track, “Superhuman,” takes optimism to a new level, with lyrics like “You Are Super” and “I Know I Can Fly” sung to an upbeat melody. In the music video, the band executes its typical highly complex choreography while the members intermittently opening up their jackets - a visual tribute to Superman tearing his shirt open.

“‘Superhuman’ is a song about realizing one’s potential and being optimistic, and I hope many people can gain strength from listening to our energetic song,” said member Jaehyun on Friday during a showcase for the new album.

Producers Adrian McKinnon, 1Take and TAK composed “Superhuman,” while Social House, the team behind Ariana Grande hits like “7 rings” and “thank u, next,” collaborated on producing the track “Highway to Heaven.”

Considering NCT 127 had just returned to Korea from Mexico the day before the showcase, one of many stops in its ongoing world “NEO City - The Origin” tour, “Superhuman” seems like a fitting way to describe the group.

Nine members of the 10-member band - Johnny, Haechan, Mark, Jaehyun, Taeyong, Yuta, Taeil, Jungwoo and Doyoung - have been busy with the tour since it kicked off in January, performing in 29 concerts across 20 cities in Japan, the United States and Canada. The band is set to pick up the tour again in June and make final stops in Thailand and Russia. Winwin, a Chinese member who has been noticeably absent from recent activities including the new album, is currently performing in another boy band by SM Entertainment.

With the world tour being the first for NCT 127, who debuted in 2016, the members had a lot to say about their experiences abroad.

“If I think about the time before we debuted, I wouldn’t have imagined going to all these countries,” said Taeyong. “We felt really thankful and all the members kept repeating the word in our conversations.”

“In every city people were enthusiastically cheering and singing songs in Korean so it gave us a lot of strength,” added Jaehyun.

For Mark and Johnny, who spent their childhoods in the United States and Canada, going back to North America to perform was a very special experience.

“I’ve joked about taking the members to my home in Chicago when we were just trainees,” said Johnny. “It felt really different to be able to actually take them home.”

Hailing from different parts of the world, the members also touched on how their multicultural backgrounds helped on tour.

“In Japan, I could help members with Japanese, and in the United States, Johnny and Mark were able to help,” said Yuta. Taeil added that he emerged from the tour feeling that his English has improved, with Johnny and Mark always there to offer support.

“I was worried about the language barrier ahead of appearing on ‘The Late Late Show with James Corden,’ but playing games on there ended up being really fun,” Doyoung added.

During the band’s world tour, it dropped by major U.S. broadcasting companies to promote its music on shows like ABC’s “Good Morning America” and “Strahan and Sara,” CBS’s “The Late Late Show with James Corden” and FOX5’s “Good Day New York.”

The group is set to appear in iHeartRadio’s Summer Kick Off Concert and Wazzmatazz musical festivals on May 31 and June 2 in California.

On Saturday Korean time, “NCT #127 We Are Superhuman” ranked first in iTunes albums charts in 23 countries including the United States, Brazil, Greece and Indonesia.