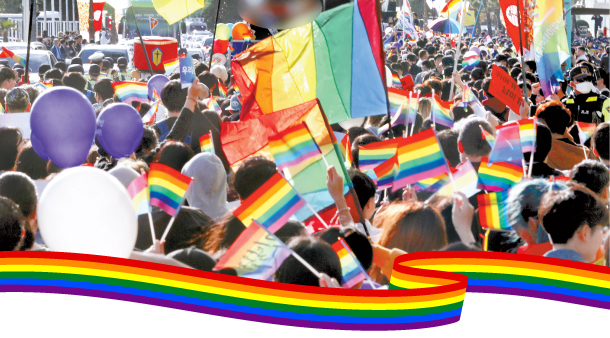 On May 17, the International Day Against Homophobia, Transphobia and Biphobia, the Taiwanese legislature legalized same-sex marriage, becoming the first governing body in Asia to do so. The vote came after the Constitutional Court ruled that same-sex couples should be able to marry in 2017 and gave Parliament until May 24 to come up with a new law.

Taiwan’s president Tsai Ing-wen praised the vote with a tweet that read, “On May 17th, 2019 in #Taiwan, #LoveWon. We took a big step towards true equality, and made Taiwan a better country.”

That same day, Korean LGBTQ activist organization Rainbow Action - an alliance of 20 LGBTQ rights and human rights groups - held a rally in front of the Sejong Center for the Performing Arts in Gwanghwamun, central Seoul, and then marched towards the so-called Gay Street in Jongno 3-ga.

“Everyone has the right to live a life safe from hate and discrimination, but in reality, the lives of sexual minorities are always under constant threat,” read a statement published by the organization that was signed by 115 activist groups and 438 individuals. “We vow to fight against hate towards sexual minorities and to make our existence known in a discriminatory society […] Equality is the path for a society in which everyone is safe.”

The participants of the march shouted slogans such as “Let’s shine the lights of equality and safety against hate and discrimination,” “We are here, do not omit sexual minorities” and “There is no equality without the human rights of sexual minorities.” The march finished at around 9 p.m. at the Jongno 3-ga subway station.

While about 30 countries around the world now recognize same-sex marriage, the conflict between those in support of and against LGBTQ rights in Korea still remains a hot-button issue, making the upcoming Seoul Queer Culture Festival the center of attention for all parties concerned.

The first Seoul Queer Culture Festival, titled “Rainbow 2000” was held on Sept. 8 and 9, 2000. It was a small and humble two-day festivity, comprised of a conference and performances at Yonsei University in western Seoul and a parade through Daehangno, central Seoul, on the evening of the second day. Around 50 participants marched through the rainy streets while people watched in curiosity.

The Seoul festival has been held every year since 2000 in various neighborhoods around the city, mainly around Jongno and Cheonggye Stream area in its earlier years, then moving to the student-friendly neighborhoods of Sinchon and Hongdae in western Seoul. The festival has been held in the open plaza in front of City Hall in central Seoul since 2015, with its parade directed east toward the streets of Jongno and Euljiro.

According to organizers, the upcoming 20th Seoul Queer Culture Festival will be “the biggest yet.” A series of lectures began on May 21, with a session titled “Our Narrative Within the Festival: The Discourse on the Formation and Development of the Queer Culture Festival” held by lecturer Gahng Tae-gyung, director of the Asia Cultural Creativity Institute. A second lecture will be given on Tuesday by Kim In-sun, who will talk about her story of being a lesbian living in Germany, and Jeong Min-woo, whose lecture is titled “Pride Parades and Queer Politics in Taiwan, Singapore, and South Korea.”

A special event dubbed “Seoul Pink Dot” will be held on May 31 in Seoul Plaza from 5 p.m. to 7:30 p.m., featuring various booths and performances. The 19th Korea Queer Film Festival will take place from June 5 to 9 at the Daehan Cinema in central Seoul as well. But the highlight of the festival, the 20th Seoul Queer Parade, will take place on June 1 from 11 a.m. to 7 p.m., with booths and performances within Seoul Plaza, and a parade from 4 to 6 p.m. from the plaza to Euljiro, Gwanghwamun then back to City Hall.

Both sides of the street

Last year, the parade was held on a scorching hot day in July. While around 50,000 participants filled up Seoul Plaza, a swarm of anti-LGBTQ demonstrators, comprised mainly of Christian groups and conservative seniors, took over the streets across the plaza, waving the flags of South Korea and the United States. Their pickets read, “We oppose homosexuals because we love” and “Male to male sex is the main transmitter of AIDS.” The conservative protesters even laid down in the middle of the streets in an attempt to block the parade.

People were less aggressive and hostile towards those in attendance 19 years ago, according to Han Chae-yun, the director of the Seoul Queer Parade. An out lesbian, Han currently works for various social activist groups including the Seoul Queer Culture Festival, the Korean Sexual Minority Culture and Rights Center and Beyond the Rainbow Foundation to help the LGBTQ community in Korea.

“We started seeing severe opposition, like what we see these days, beginning in 2014,” Han said. “Back when I was a university student, some 20 years ago, people just called us ‘perverts’ or ‘homos,’ but that was it. We didn’t see such an organized form of hate directed towards us. There are now more people who say that we should be equal, but just as many don’t even treat us like human beings.” 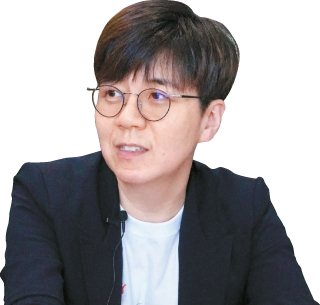 She added, “I think it’s evidence of the fact that our presence became more visible in society. Because you have to be recognized to be opposed.”

The opposition is so fierce, according to Han, that festival organizers have to camp outside police stations to reserve the event, which is made on a first-come first-served basis. This year was as intense as ever. A total of 290 people, including the festival organizers and civil volunteers, took turns to hold their seat at the Namdaemun Police Precinct, the Jongno Police Precinct and the Seoul District Police Agency for eight days straight, so that they could successfully hold their parade through central Seoul. Sitting next to them were members from the opposition, who “ranged from conservative seniors to religious devotees.”

“In Korea, the people who oppose the LGBTQ community use [the festival] against a bigger means. Like the fact that a few years ago, one pastor told me that he went protesting not because he really hated gays, but because he hated [then Seoul] Mayor Park Won-soon. It’s the same for religion. They teach things in church about the things that have really never happened or things that will never happen, then say it’s against the freedom of expression if they’re told not to,” said Han.

Conservatives in Korea often use their opposition to the LGBTQ community as a way of unifying constituents. For instance on May 17, Liberty Korea Party Chairman Hwang Kyo-ahn declared that he “opposed homosexuality both personally and politically,” while the party itself released a statement against the Seoul Queer Culture Festival on May 20 that it is “a festival that has been tainted for its severe [body] exposure and actions, as well as its suggestive slogans.” The party’s spokesperson Min Kyung-wook even called the ruling Democratic Party “to come out as the Queer Party,” pointing out the fact that some members of the Democratic Party have expressed their plans to attend the upcoming Parade.

There are many reasons for protesters to take to the streets to oppose the annual parade, but statistics prove that Koreans are slowly becoming more accepting of the LGBTQ community. According to the “2018 Korea Social Integration Survery” published by The Korea Institute of Public Administration in February, the percentage of people who said that they “cannot accept homosexuals” fell below 50 percent for the first time in the survey’s history. The survey, conducted from September and October last year polled some 8,000 Korean citizens, 49 percent of which answered they were against homosexuality, while the rest of those interviewed answered that they could accept them as either neighbors (30.5 percent), work colleagues (14.6 percent), close friends (5.5 percent) or spouses (0.4 percent).

One step at a time

“We’ve been pushing for the anti-discrimination law since 2007, and it hasn’t happened yet,” said Han. “The economy has grown so much over the course of those 12 years, but not the overall level of awareness of the society. We spend our whole lives tormenting ourselves with questions about who we are and why we are like this, something that wouldn’t even briefly cross the minds of heterosexuals.

“When I was younger, I felt like I was doing something wrong - even though I didn’t exactly know what - when I fell in love with someone [of the same gender]. We found out later that we both loved each other, but we also knew that we would have to keep it a secret, that it will break once people found out. I had to constantly resuscitate myself from the choking self-contempt, because of the fact that I loved someone,” she recollected.

Although more people have come out as LGBTQ in recent years, Korean society still binds a heavy chain on people to keep themselves “in line.” The parade is thus aimed at everyone, of all genders and sexualities, according to Han.

“It’s referred to as ‘Pride Parade’ in English, because the whole point of the festivity is for us to have pride in ourselves. People think that we don’t exist in society and try to erase us out of the picture. But we’re here. We’re your friends, your family, your neighbors and your colleagues, and we won’t be ashamed of that. We will be proud of who we are, because that’s where it all starts,” said Han.

She added, “For those who are still tormented - you are O.K. just the way you are.”