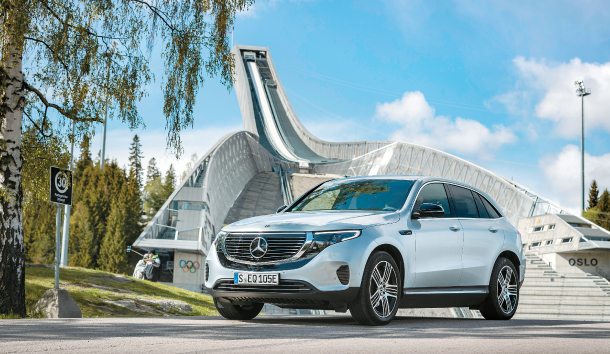 The Mercedes-Benz EQC all-electric SUV is parked in front of a ski jumping hill in Oslo, Norway, on May 14. [MERCEDES-BENZ KOREA]

OSLO, Norway - Mercedes-Benz started producing its first full-electric luxury SUV EQC earlier this month and last week invited reporters to test-drive the highly-anticipated model in Norway, where the roads are like test tracks for all sorts of electric vehicles.

The first impression after driving an EQC on May 14 was that Mercedes really focused on the most basic needs of electric car drivers when developing the model. The midsize crossover SUV combines the usual comfort of a Mercedes car with a whole host of high-tech features designed to ensure drivers don’t need to worry about running out of battery. 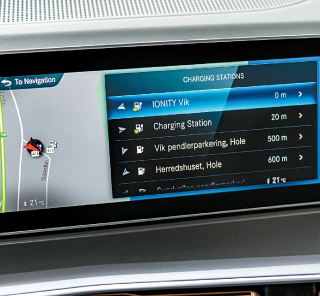 Peter Kolb, who was in charge of the overall development of the EQC, said that the company focused on developing a “whole package of services” while introducing its electric SUV so that consumers have the right apps and tech features to use the all-electric car without fear of running out of juice, during a global press briefing with reporters on May 14 in Oslo.

According to Kolb, it took four years of development to make the whole thing commercial. While it may seem uncharacteristically late for Mercedes to jump into the all-electric car race, Kolb said, “Mercedes has kept to the original timeline set up internally and we didn’t want to rush just to catch up with competitors.”

The Korea JoongAng Daily got behind the wheel of Mercedes’s answer to the Tesla for a test drive on a roughly 120-kilometer (74.5-mile) route around Oslo on May 14.

The new high-tech features were immediately evident. One neat feature was the car’s navigation program activated through the in-car infotainment system, called the Mercedes-Benz User Experience, and the mobile app dubbed the “Mercedes me App.”

The automaker has been working on ways to offer routes from destination A to B with the car’s battery status in mind. Karsten Schock, a Benz engineer for cloud application platforms responsible for building EQC-optimized navigation, said the system is able to tell drivers which charging stations to drop by on the way and how much they would need to charge the battery for maximum driving efficiency.

“We want to have a balance between comfort and time efficiency,” he said.

“But also having the charging infrastructure in mind, that might be difficult sometimes,” he said. “There could be only one charging station so far away that you need to charge 98 percent.”

The engineer said there are also priorities in selecting which charging stations to send drivers to. If there is only one or two charging points in a station, the drive could end up having to queue. Unlike gasoline charging, this wait could last half an hour.

So the cloud team has to consider multiple variables in offering an optimized route for drivers, especially on longer routes where recharging is crucial.

Another impressive feature in the car is the “max range” driving mode. There are five modes including comfort, eco, sport and individual, but the max range mode is specifically focused on making the car drive the maximum range with the power it has left. When the car reached a certain speed on this mode, this reporter felt some resistance in acceleration as the car took control to ensure as little power was used as possible.

The mode was especially useful when coupled with the car’s Eco Assist system, which takes into account navigation data as well as the speed of the car in front and speed limits to notify drivers when to take their foot off the accelerator.

Some might have felt this feature takes the fun out driving because the car does make its opinion known very regularly. For this reporter, not used to the roads in Oslo, the feature gave some assurance that she wasn’t inadvertently going to get a ticket for violating the speed limit. On the roads of Olso, where it turns out the speed limit oscillates between 40 and 80 kilometers per hour, this function proved especially useful.

Drivers can also ask the car questions like “Where is the closest charging station?” as there is a voice assistant that can be activated by simply calling out “Hey Mercedes,” but this feature seemed like it needed some work. This reporter kept telling the assistant that no help was necessary, but it insisted on asking for the phone number of the person I wanted to call, even after being shut down four or five times.

Apart from the battery-saving tech, the car’s overall performance was admirable. The movement was smooth and it was quiet inside throughout the ride.

The car was able to accelerate quickly. If it weren’t for the frequent speed limit changes, this reporter would have tried driving more aggressively. Hitting 100 kilometers per hour from time to time still proved satisfying, although the car is so quiet that at times it was difficult to tell you were going so fast.

The only thing that didn’t deliver was the exterior design of the car - the EQC just doesn’t look that distinctive on the outside. It very much resembles Mercedes’s GLC mid-size SUV, except for some design cues like the closed-off black panel covering the grille and blue-striped LED headlamps that give the car an electric look.

The similarities with the GLC aren’t a huge surprise - Mercedes produces the EQC on the same production line in Bremen, Germany. But even without the similarities, the car looks somewhat like a generic SUV, if not for the big three-edged Mercedes star embedded in the heart of the grille.

Still, the interior design was enough to reassure drivers that the EQC is a luxury SUV. From quilted seats, tech-savvy looking wide-screen cockpit consisting of two 10.25-inch displays, to delicately designed air vents using a rose-gold tint, all of the details give a refined look on the inside. The car is roomy, too, allowing four adults to travel comfortably.

The price and exact specs of the car for the Korean market have not been announced yet. Prices for the EQC start at 71,281 euros ($80,000) for the most basic version in Europe, but in Korea the price will likely be higher as the most basic model sold locally usually comes with more options compared to basic models in Europe. When the EQC does launch here, it will have to compete with models like the Tesla Model X, Jaguar I-Pace and Audi e-tron.