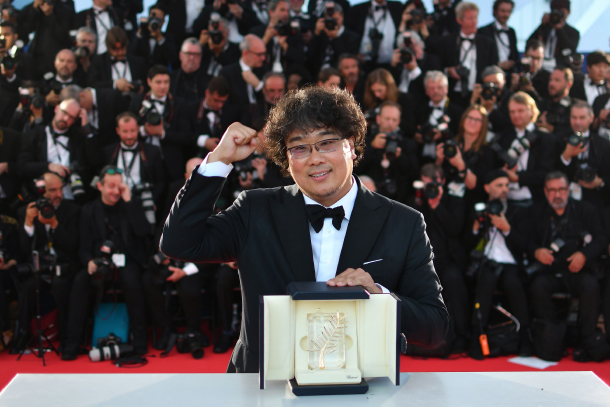 Director Bong Joon-ho holds his fist in the air to celebrate winning the Palme d’Or at the 72nd Cannes Film Festival for his film “Parasite.” Bong is the first Korean filmmaker to receive the prestigious award. [YONHAP]

Bong Joon-ho became the first Korean director to win the Palme d’Or at the 72nd Cannes Film Festival on Saturday for his latest film “Parasite.”

“I was just a timid, awkward film maniac who wanted to become a director ever since I was 12,” said Bong during his acceptance speech for the film festival’s highest honor. “I never thought this day would come where I would be the one holding this trophy. Thank you.”

At a press conference for the film held in Seoul in April, Bong shied away from the possibility of winning the prestigious award.

He said he thought that “Parasite,” which explores social class issues, was too specific to Korea for overseas audiences to fully understand, and that there were other prominent contenders for this year’s competition.

“Sorry We Missed You” director Ken Loach and “Young Ahmed” directors Jean-Pierre Dardenne and Luc Dardenne are all two-time winners of the Palme d’Or. “A Hidden Life” director Terrence Malick, “Once Upon a Time in Hollywood” director Quentin Tarantino, and “Mektoub, My Love: Intermezzo” director Abdellatif Kechiche have all won the award before as well.

Despite Bong’s concerns, the Korean sentiment that is portrayed throughout the film was one of the reasons why the director won the prize.

“We all shared the mystery of the unexpected way this film took us through different genres and spoke in a funny, humorous, tender way - with no judgment - of something so relevant and urgent, so global in such a local film, with such a beautiful efficiency of media, and an understanding of what film really is,” said jury president Alejandro Gonzalez Inarritu at the post-ceremony press conference. Inarritu confirmed that Bong’s work received a unanimous decision by the jury.

Bong started to make a name for himself with his debut feature film “Barking Dogs Never Bite” (2000), where he caught the attention of local audiences for its representation of social hierarchy and conflicts related to the generation gap. “Memories of Murder” (2003) was both a financial success and praised by the critics for its gripping serial killer story.

His third work, “The Host,” was a box-office monster. Over 10 million moviegoers went to the cinema to watch a creature portrayed using then-advanced CGI technology arise from the Han River to terrorize Seoul.

After he became recognized by both local and international audiences, Bong recently worked with big-name Hollywood actors, such as Tilda Swinton, Jake Gyllenhaal, Steven Yeun and Chris Evans for his films “Snowpiercer” (2013) and “Okja” (2017). “Parasite” had the local media’s attention for being Bong’s first Korean-language movie after a 10-year hiatus.

“Every time I came to Cannes the film [I was in] received an award. For ‘Secret Sunshine’ (2007), it was Jeon Do-yeon who won the Best Actress award, for ‘Thirst’ (2009), director Park Chan-wook received the Jury Prize, and now it is Bong’s turn,” actor Song Kang-ho said while he gave an interview at the festival.

“The Host” (2006) was Bong’s debut at the 59th Cannes Film Festival through the Director’s Fortnight section. His fifth feature work, “Mother” (2009), was invited to screen under the Un Certain Regard section at the 62nd event. Finally, “Okja” was nominated to compete at the 70th event. In his fifth appearance to the acclaimed film festival and second nomination for the International Competition, Bong finally became the winner of the Palme d’Or.

The Grand Prix, the second-highest prize, was given to director Mati Diop for her debut film “Atlantics.” She became the first black female filmmaker to compete in the festival and receive a prize. The Best Director award went to the Dardenne brothers for “Young Ahmed.”

Bong’s award is especially meaningful for Korea, as this year marks the 100th anniversary of the birth of the Korean film industry. With the boost of the grand prize, the film’s distribution rights were sold in 192 countries, setting a new record amongst local films. The previous record was held by director Park Chan-wook’s “The Handmaiden” which was sold in 176 countries.

President Moon Jae-in personally thanked the filmmaker for his achievement in a congratulatory letter he uploaded on social media. The president said he was curious about watching “Parasite” and “[the film] is an unforgettable present that Bong gives to all Korean audiences who have loved local films.” Local moviegoers’ excitement is growing as they wait for the film to premiere in Korea this Thursday.