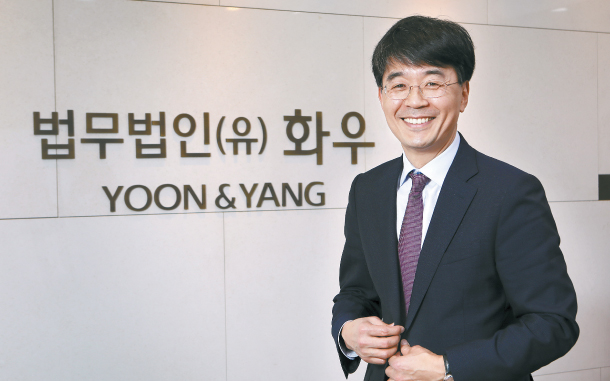 Lee Jun-sang, managing partner of Yoon & Yang LLC, believes that his firm’s pursuit of democratic governance helps it stand out from other Korean law firms as Yoon & Yang expands into the global market. [PARK SANG-MOON]

After spending nearly 20 years on the bench, Lee Jun-sang says he still has the habit of trying to find middle ground when he encounters people in conflict. As a managing partner of Korean law firm Yoon & Yang LLC, that sure comes in handy.

“When some sort of a problem pops up between members of our law firm or between them and our clients,” said Lee, “I try to listen closely to both sides and search for a way they can reconcile or solve that issue.”

That attentiveness induces people to believe that whatever conclusion he suggests in the end is meant to serve the best interests of everyone - not just a particular person or group.

Lee calls that part of Yoon & Yang’s “democratic governance,” a spirit he tries to spread within the top-tier Korean law firm by encouraging its members to voice their opinions in decision-making procedures. As Yoon & Yang aims for a much larger market outside of Korea, Lee is positive that its democratic governance system will shine in the long run.

So far, it seems to be working.

Yoon & Yang was crowned “Firm of the Year” in 18 practice areas last year by the Asian-mena Counsel magazine, a monthly legal publication for corporate counsels based in the Asia-Pacific and Middle East regions, the highest number of areas out of all Korean law firms.

The Korea JoongAng Daily recently sat down with Lee in his office in Gangnam District, southern Seoul, to hear about Yoon & Yang’s globalization strategy and how his former career as a judge helped him after leaving the bench.

Q. Yoon & Yang has a Korean desk in Jakarta, Indonesia, as well as offices in Vietnam’s Ho Chi Minh City and Hanoi, and Uzbekistan’s Tashkent. Isn’t it rare for a Korean law firm to open a branch in Uzbekistan?

A. The Tashkent office was opened in January 2008. We were the first major Korean law firm to open a branch there because we wanted to provide legal support for an increasing number of Korean companies entering CIS [Commonwealth of Independent States] countries, including Uzbekistan, Kazakhstan and Russia. It wasn’t easy settling down, but we eventually did. The Tashkent office is led by Kim Han-chil, a Russian attorney.

What are some of Yoon & Yang’s biggest accomplishments in Uzbekistan?

We helped the Uzbekistan unit of the state-owned Korea Development Bank, UzKDB, merge with the Uzbekistan unit of the Royal Bank of Scotland Group, RBSUz, in 2010. At the time, our financial lawyers who had experience merging banks formed a team with our lawyers in the Tashkent office to offer legal advice on how the acquisition system works, and how to interpret Uzbek laws that failed to clarify certain steps customarily needed for that procedure.

Yoon & Yang also helped Uzbekistan vastly improve its securities law system by actively explaining to Uzbek officials how the Korean system works and how Korea responds to any side effects. The Uzbek government put most of Yoon & Yang’s legal advice into effect, which went on to improving Korea’s international reputation.

Tell me about your offices in Vietnam and the Korean desk in Indonesia.

Yoon & Yang’s Ho Chi Minh City office opened in November 2016, after which the Hanoi office opened in August 2017. Most Korean law firms open their Ho Chi Minh City office first and then follow up with a Hanoi office about one or two years later after testing the waters, but it took only nine months for Yoon & Yang to do that. Over the years, we provided legal advice to numerous clients, including Asiana Airlines, Korean Air, Hyundai Engineering, Daelim and NH Bank, among others. Attesting to our success, Yoon & Yang was the only Korean law firm that made the list of 2017 Emerging Markets Experts by Asian Legal Business, a monthly legal publication affiliated with Thomas Reuters.

We also have a Korean Desk in Jakarta, set up at Amir Syamsuddin & Partners, which was founded by Indonesia’s former justice minister, Amir Syamsuddin. [In Indonesia, foreign law firms aren’t allowed to practice in their own names and must work with a local law firm.]

We try to keep our decision-making procedures democratic at Yoon & Yang, so compared to other major Korean law firms, I think our attorneys have a bigger say in what’s going on around here. I want to take this governance model abroad to our international offices and see if our Korean lawyers can form some kind of a synergy with foreign lawyers under the same system.

How’s a democratic governance system different from a system that’s undemocratic in terms of the outcome?

When you manage a law firm with centralized authoritarian rule, things can definitely get handled a lot more quickly than under a democratic system. But a law firm is a group of highly educated professionals, so I think that in the long run, the quality of their work will eventually worsen over time if they’re forced to work in a top-down system. Korean law firms that chose the centralized system thrived until now, but I’m hoping that the democratic road we’re taking will one day turn out to be a clever decision because it’s a road that our members at Yoon & Yang agreed upon.

What new business attempts or practices have Yoon & Yang made or recently begun?

We hired some new lawyers last year to work on a team specialized in overseas construction disputes. A lot of Korean construction companies have projects abroad, some that take as long as 10 years to complete, and during that process they sometimes end up wrangling with their foreign clients over various issues. The companies can’t take legal action on each and every issue, so our job is to arbitrate between both sides. This job was previously done mostly by foreign law firms, but hopefully that will change now.

How does your experience working as a judge help or hinder your current job as a lawyer?

What helps is that I still have a habit of trying to find middle ground between conflicting parties, and as a managing partner, that helps because when I suggest a solution in the end after hearing both sides, they tend to take note of my sincere attention and accept that suggestion.

A not-so-good side of being a former judge is that sometimes I’m told that I’m not “aggressive” enough like other managing partners. But I think that depends on how a person defines aggressiveness, and I’m trying to overcome my weakness with stronger teamwork among my colleagues at Yoon & Yang.

Which life is better?

I really liked my career as a judge, and I like my current job as a lawyer, too. But I think one really good thing about being a lawyer is that I can see more people up-close. When I was a judge, I usually saw a refined version of them presented through their lawyers or through documents. I was unable to see their raw side. But now, I meet my clients and hear their thoughts in person, so I’ve come to realize, ‘Wow, this is how people really live.’ As a lawyer, I have to give my clients various options to solve their problems if they’re within the legal boundaries, and some grow really pushy because they’re in a rush.

At the beginning of my career as a lawyer, it was a bit uncomfortable for me because I wasn’t used to such aggressiveness, but I’ve now grown really thankful of them for enabling me to learn that’s how people really are with legal issues. If I had spent my entire life on the bench, I wouldn’t have known this.