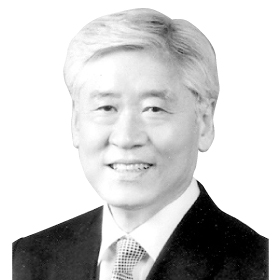 Shin Eui-hang
The author is a visiting professor of Sungkyunkwan University and professor emeritus at University of South Carolina.

Koreans are a homogenous people in terms of the distribution of surnames across the population. According to its 2015 census, Korea has about 250 surnames. By contrast, China has about 4,000 while Japan has nearly 100,000. About 20.7 percent of the Korean population has the surname “Kim.” The proportions of the population with the surnames “Lee,” “Park,” and “Choi” are 14.1 percent, 8.1 percent and 4.5 percent, respectively.

A Korean saying goes, “If you throw a rock from Mount Namsan, it will hit a Kim.” In the 1987 presidential election, three of the four major candidates had the surname “Kim.” To avoid confusion one must indicate the first names of individuals in addition to their surnames.

There are quite a few players on the Korean Ladies Professional Golf Association (KLPGA) tour with not only the same surname but also the same first name. In the Doosan Match Play Tournament this month, five of the eight players in the quarterfinal matches had the surname Kim. All four players who reached the semifinals were Kims. In one of the semifinal matches, the two players had the same surname and first name, Kim Ji-hyun. Kim Ji-hyun defeated Kim Ji-hyun2 in the match, and Kim Ji-hyun went on to win the tournament.

The KLPGA has instituted a policy of assigning a number at the end of a player’s first name if there are multiple players with the same surname and first name. The number is based on when a player joined the KLPGA as a regular member: The earlier the player joins, the lower the number given to the player.

There are 60 sets of two or more players sharing the same surname and first name in the roster of KLPGA members. The largest number of players with same surname and first name is six with the name Lee Jung-eun. In fact, the Lee Jung-eun6 is a rookie on the LPGA tour in the United States and is leading the Rolex Rookie of the Year point standings thus far in the 2018-19 season. 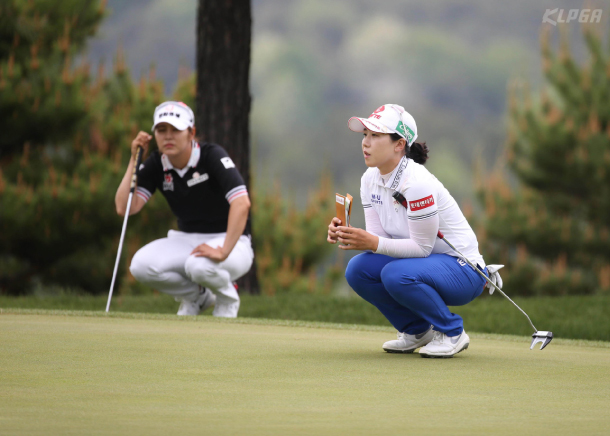 Kim Ji-hyun, left, and Kim Ji-hyun2, right, carefully look at the green around Hole 4 in a semifinal match at the 2019 Doosan Match Play Tournament earlier this month. [KLPGA]

The Korean men’s professional golf tour, the KPGA, adds the player’s membership number at the end of his first name. For example, we see “Kim Tae-woo 1087,” “Kim Tae-woo 1468” and “Kim Tae-woo 1689.” But there is substantially less overlap of names in the KPGA as compared to the KLPGA. Twenty-one sets of two or more players share the same surname and first name in the KPGA, as opposed to 60 sets in the KLPGA.

This difference stems from differences in the traditional guidelines for naming boys and girls in Korea. The first names of boys traditionally follow a predetermined generational order of Chinese syllabic characters within the clan who share the same surname and town of origin. Families with the same surnames but different geographic origins have different sets of Chinese characters to be used in the first names for each generation.

On the other hand, there are no specific clan-based norms parents must follow to name their daughters. Korean parents typically pick the first names of their female children primarily based on considerations of feminine gracefulness, beautiful meaning and soft-ending sound syllables.