Through June 13: The solo show of Sunpil Don, 35, features 10 installation works and sculptures that the artist created mainly with action figures.

The artist has not only collected the action figures but has researched their history and their evolution in the context of cultural anthropology and sociology, while also writing books about the topic.

Through June 13: The National Museum of Korea is currently holding a special exhibition featuring 88 Arhat statues from Chuncheon, Gangwon. They are one of the historical disciples of Buddha that have lifelike expressions of happiness, anger and sorrow. The statuettes were first discovered in 2001 by a farmer in Yeongwol County, Gangwon. The excavation project was launched and a total of 317 statuettes were unearthed. The site was revealed to be the location of the Changnyeong Temple during the Goryeo Dynasty (918-1392). The Arhats were first revealed to the public at the Chuncheon National Museum in Gangwon last year and came to the National Museum of Korea in April. 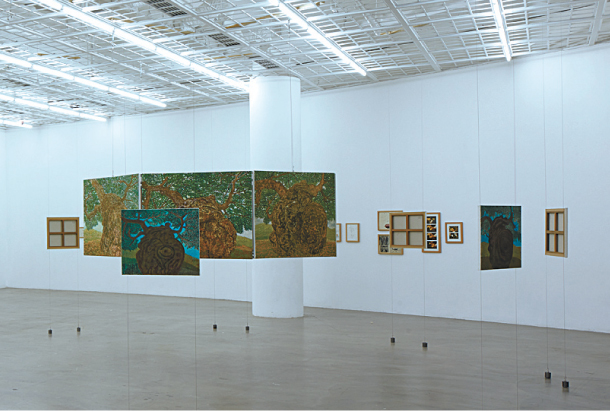 The exhibition title was taken from a book by the neurologist Oliver Sacks, who wrote about his travel to the small island of Pingelap is a place where over 5 percent of residents are completely color blind due to genetic factors but live in harmony with those who are not color blind based on mutual understanding.

Through July 7: At “Na Na Land: It’s My World,” how you look at yourself is more important than what others think.

The exhibition displays 64 paintings, installations and videos by 21 artists that promote self-confidence and body positivity, as well as the acceptance of others and their differences. Na means I in Korean.

Visitors are guaranteed a fun time at “Na Na Land” with its interactive installations. Tongjjwa’s “Name Show” (2019) offers visitors the chance to create a new name for themselves, while at Koh Jae-wook’s “DIE For” (2016, 2019), visitors can sing their hearts out in a small karaoke room covered with mirrors inside.

An English teacher from the Goyang Foreign Language High School will provide a guided English tour for those interested on June 29 at 3 p.m.

Admission is 8,000 won. The museum is closed on Mondays. Take bus No. 571 at Yeonsinnae Station and get off at Sindo Elementary School Station.

Through Aug. 4: The largest-ever retrospective of the celebrated British painter David Hockney in Asia features 133 paintings, drawings and prints by Hockney, one of the world’s most influential living artists.

There is also a digitally-combined photo work “In the Studio, December 2017” (2017), which was recently gifted to Tate by Hockney.