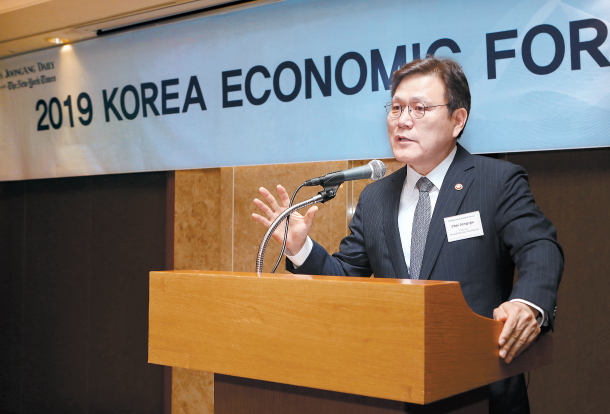 “We will resume the procedure,” said Choi Jong-ku, chairman of the FSC, after the close of the annual Korea Economic Forum hosted by the Korea JoongAng Daily Monday.

“The two bidders have come to know their weak points,” Choi said. “So if they try again, I expect at least one of them to make it next time.”

The regulator turned down proposals by Viva Republica and Kiwoom Securities to open internet-only banks on Sunday, saying that neither company had the financing or innovation to successfully open an online bank.

On Monday, Choi said he expects Shinhan Financial Group to join the bidding, though the country’s largest financial holdings unit pulled out of a consortium led by Viva Republica, an operator of a popular money transfer app, Toss.

Shinhan’s departure was considered a major blow to the application by Viva Republica as the leading financial firm was expected to be a strong financial backer. In explaining the reasons for the rejection of the two bids, the FSC cited insufficient ability to raise capital for the Toss-led application and a lack of feasibility for the Kiwoom-led consortium.

The FSC plans to open a new round of bidding in the third quarter and grant licenses during the fourth quarter if there is a viable contender.

The two failed bidders have yet to say whether they will try again.

Despite Shinhan’s departure, a total of eight investors planned to take part as minor investors in the Viva Republica bid. Viva Republica was set to hold a majority stake of 60.8 percent. Hanwha Investment & Securities would have owned 19.9 percent and a number of international venture capital investors - including Altos Ventures, Goodwater Capital and Ribbit Capital - were set to take the remaining 19.3 percent.

As for Kiwoom Securities, its partners included SK Telecom, Hana Financial Group and 11st, a major e-commerce unit spun off from SK Telecom. A committee of outside experts in finance, accounting, technology and the law assessed the bids.

Chairman Choi admitted that the result was somewhat unexpected, but he added that “we can’t help but to accept it.”

The chairman also shared his assessment of the current state of the economy during a Q&A session at the Korea Economic Forum.

“I think [investors’ concerns] are heightened due to external uncertainties surrounding the U.S.-China trade war,” Choi said. “Still, many see that the current account balance will improve in the second half of this year.”

Choi added that the foreign exchange market will maintain stability while momentum for the country’s stock markets will be restored.

But he vowed to take measures when needed. “No one can be sure [of future economic conditions],” he said. “But we will keep tabs on the markets and come up with relevant measures if needed.”