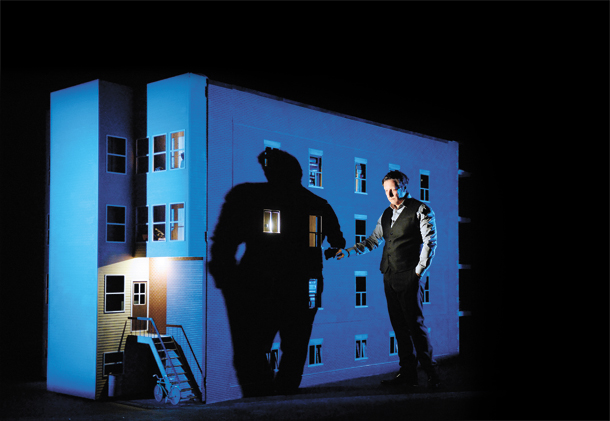 Like many aging actors, 61-year-old Robert Lepage - a Canadian actor, playwright and stage and film director - finds himself struggling to memorize the lines for a play.

Despite that struggle, Lepage finds that he can still remember unexpected things like his old phone number and songs from the 1960s and ’70s he used to like. That realization led him to create a solo show, titled “887,” and, in fact, this is how the play, which is slated to have its Korean premiere on Wednesday at the LG Arts Center in southern Seoul, begins.

Lepage appears on stage and talks about how he was invited to recite a poem at a Montreal cultural event and the difficulty he has memorizing it. The struggle sends his thoughts to 887 Murray Avenue, his childhood home.

“‘887’ is a show about memory,” said Lepage during a press conference at the Canadian Embassy on Monday prior to the show’s launch in Korea. “I was very interested in the phenomenon of memory - what we remember and what we think we remember. It brought me to a place where I tried to remember my very first memory and all of the rest started to unfold and transported me to the ’60s and the very first years of my life.”

As an internationally celebrated stage director, a number of Lepage’s works have been performed in Korea, including “The Far Side of the Moon” in 2003, “The Andersen Project” in 2007 and “Needles and Opium” in 2015. But this will mark the first time audiences in Korea have seen Lepage himself performing. “887” is produced by Ex Machina, a multidisciplinary production company he founded in 1994.

Through the play, Lepage shares his personal stories and the events that happened to him and his family in Quebec, where he grew up during a time when Canada was struggling with tensions between its francophone and anglophone communities.

“Canada was a bit of a schizophrenic culture because francophones and anglophones tried to share the same country and culture for many years, trying to have interactions and exchanges,” said Lepage. “But it didn’t work, and it was very clear from the ’50s that there was a clear class struggle between the two groups. Those who spoke English were the bosses of companies and those who spoke French mostly worked in cheap labor. My father was a taxi driver and was very struggling.”

By the ’60s, the difference became very distinctive and, according to Lepage, conflict and riots happened across the country, which “pretty much echoed what was going on around other parts of the world.”

According to Lepage, “887” is the first one man show where he uses his own name. “Usually I hide behind the character to talk about myself. But this one is a bit more exposing. I speak of myself and of my youth,” he said.

But why should audience members on the opposite side of the globe sympathize with one man’s personal memory of his childhood, family and country in the ’60s and ’70s? 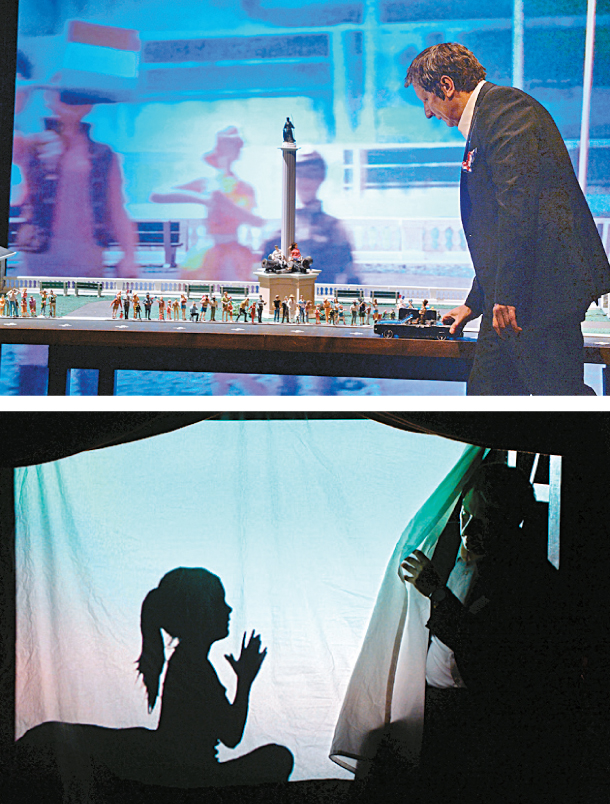 Although the story is personal, Lepage says he hopes it will also “re-enact” the memories of the audience members.

“[The] theme of memory is very important in this day and age because very often we have an impression that society has lost its memory,” said Lepage. “For example, if we look at Europe at the moment, we are seeing things happening socially, we are hearing discourses and there are conflicts. Whenever you hear and see these things, we say, ‘Europe has lost its memory,’ because not so long ago, maybe 50, 60 or 100 years ago, a lot of things happened in Europe that aren’t so much different to what is happening today.

“Then you think, ‘Don’t people remember?’ They are on the course to making the same errors, the same mistakes. That’s what memories are for. That’s what teaching history is for. That’s what art is for. Art is there to remember - to remind people who they were and what happened. So I first want to open it to debate. As an artist, I think our role is to re-enact people’s memories by reminding them of the historical context, refreshing their memories so that they do not make the same mistakes.”

Lepage is known for introducing new technology through his works. His most extravagant productions include Cirque du Soleil’s permanent Las Vegas show “Ka” at the MGM Grand, as well as “The Image Mill” in 2008, which used the huge surface of the Bunge grain elevators as a giant screen, making the biggest outdoor architectural projection in the world at the time. Yet Lepage kept “887” a bit more down to earth.

“My theater has always been very much open to introducing new technologies and imagery and working with sound,” he said.

“But in the early days, I’ve been very clumsy in doing that. When you work with new technologies or interactive videos, very often these tools take over. So with time, I’ve learned how to tame these technologies.”

But “887” is not at all analog. Lepage introduces miniaturization by creating small miniatures of his apartment - a very fancy high-tech doll house - to tell his childhood story. There are a lot of audio and visual works involved, but in a simple and playful way so that it is closer to puppetry, says Lepage.

He believes that his style of theater will attract theatergoers as he is aware and finds it remarkable that the average age of theatergoers in Korea is very young compared to other parts of the world.

“I was also surprised to see that two-thirds of the people who came to take the workshop on creating a play at the MIT Media Lab about eight years ago in Boston were Koreans,” he said, adding that he believes there “might be a new wave of theater here, of people who try to understand the relationship of vocabulary between new technologies and storytelling.”

“Theater for me is a great mother art, in a sense that it invites into its realm all other forms of art,” Lepage added. “In theater, you often invite music, movement, literature and acting of course. You invite any form of art so it’s a roundabout. For that reason it receives the influence of all the other forms of art, which seem to embrace technology much faster. So as a theater artist, you have to have an open mind.”

Lepage believes that although his works are known for showing state-of-the-art technology, theater survives if it “continues to play its role of a communion.”

“Communication and communion are two different words,” said Lepage. “Theater artists should commune, we have to share with the audience, not communicate. These days, it takes so much effort for people to come out and watch a performance. They have to make a reservation, buy tickets, park the car, pay for the babysitter and so on. It’s a huge undertaking to go to the theater today.

“Unless the theater offers a communion, people would rather stay home and watch Netflix because it’s much cheaper and easier.”