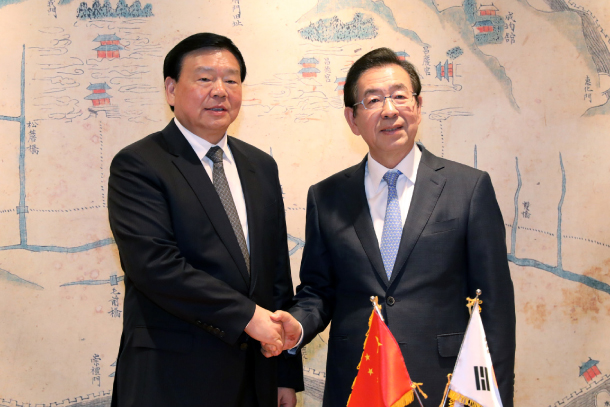 Three high-ranking officials from the Chinese Communist Party’s Central Committee are visiting Korea this week in what appears to be an attempt to persuade Seoul to not side with Washington in the ongoing Sino-U.S. trade war.

Lou Qinjian, secretary of the Communist Party for China’s Jiangsu Province, arrived in Korea last weekend and is expected to stay until Wednesday, during which he will likely meet with top officials of Korea’s largest conglomerates: Samsung, Hyundai Motor, SK and LG. Lou attended a business meeting hosted by the Jiangsu government on Monday at the Silla Hotel in Jung District, central Seoul, about boosting bilateral cooperation between Jiangsu and Korea.

Lou also met Seoul Mayor Park Won-soon on Monday at the mayor’s office in central Seoul to discuss cooperation in the development of smart cities.

Wang Xiaohong, another member of the Central Committee who serves as China’s vice public security minister, arrived in Seoul on Monday for a two-day visit to discuss judicial issues with Korea’s police and prosecution chiefs. Min Gap-ryong, commissioner of the National Police Agency, met him at his office in Seoul on Monday.

The Chinese Communist Party is composed of nearly nine million members, but only 376 people are members or alternate members of the party’s Central Committee, making this week’s visit by the three officials extremely rare.

A source in Beijing said that Beijing was sending people it thought could serve as “managers of Korea-China relations” to block Seoul from siding with Washington as the trade war between China and the United States worsens.

Chinese media outlets that often serve as Beijing’s unofficial mouthpieces have lately been warning Korea not to succumb to pressure from the United States to sever ties with the Chinese telecom giant Huawei.

The Korean newspaper Chosun Ilbo reported last week that an official at the U.S. State Department told a Korean Foreign Ministry official that services from mobile carrier LG U+ should be restricted in sensitive areas in Korea because it uses equipment from Chinese company Huawei, which compromises security. This U.S. official reportedly indicated that Korea should eventually boycott Huawei.