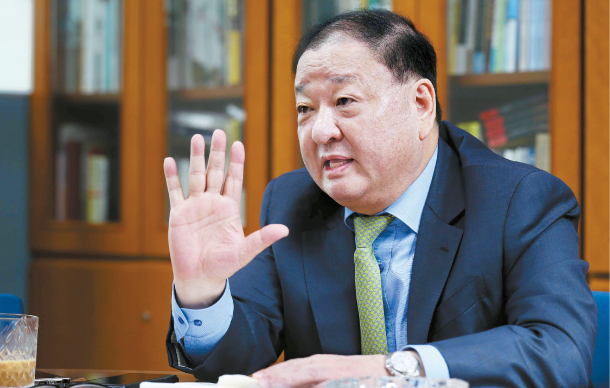 Rep. Kang Chang-il of the ruling Democratic Party speaks during an interview with the JoongAng Ilbo. [KIM SANG-SEON]

“Isn’t the forced labor issue still in court? What can we do about this ongoing matter?” a source from the ruling party quoted President Moon Jae-in as saying during a Blue House meeting in January.

Moon was referring to a series of trials that are scheduled to follow the Supreme Court’s ruling in November 2018 that a Japanese firm must pay compensation to Korean victims of forced labor during the Japanese colonial period. Following Moon’s remark, his aides - including Chief of National Security Chung Eui-yong - fell silent.

Four months later, the Blue House invited elder statesmen of society for a luncheon with the president on May 2. Lee Jong-chan, the former head of the National Intelligence Service, said resolving tensions between Korea and Japan will benefit the country. Moon then offered a similar response - “What can we do when the comfort women and forced laborer issues are still unresolved?”

The source from the ruling party said the forced labor issue was managed by the Prime Minister’s Office until November last year, but the Blue House’s National Security Office has taken it over since then.

“At the time, the Prime Minister’s Office had a compromise plan based on the precondition that Japanese firms would agree to pay compensation,” he said. “But Prime Minister Lee and National Security Chief Chung both stopped their initiatives after Moon’s comment in mid-January. Other officials have also lost their driving force. The matter was stalled for over four months.

“If this situation continues, it will be hard for Moon and Japanese Prime Minister Shinzo Abe to have a summit at the Group of 20 [G-20] Summit on June 28 and 29 in Japan,” he said. “That will be a disaster.”

A senior member of the ruling Democratic Party (DP) decided to raise his voice on the issue. Rep. Kang Chang-il, a fourth-term lawmaker representing Jeju A District, met with the JoongAng Ilbo on May 19 and 20 to discuss the current diplomatic row between Seoul and Tokyo.

Kang, 67, is known for his friendship and connections with Japan. He is the Korean chairman of the Japan-Korea Parliamentarians’ Union, an association of the two countries’ lawmakers. The group of 180 current members, established in 1976, has often played the role of mediator when bilateral relations hit a snag.

“The biggest obstacle in Korea-Japan relations is the compensation issue for forced laborers,” Kang said. “Moon and Abe must resolve it with a top-down approach. Only then can they have a summit in Osaka in one month.”

Kang, then, offered his proposal on how to resolve the issue. He said the precondition will be Japanese companies’ agreeing to compensate the forced labor victims whose damages were recognized through lawsuits. The Korean government should then create a foundation and compensate the victims, he proposed.

Q. Why did you, a senior member of the ruling party, decide to propose a resolution to the government?

A. Korea-Japan relations are in a serious crisis. If the bilateral summit does not take place next month, Korea will truly be an outcast. Economically, both countries will suffer. The Japanese ambassador to Korea and Japanese lawmakers told me that Tokyo won’t interfere with Japanese companies’ compensating the victims if Korea shows a gesture. But the government is not budging. We don’t have the luxury of time. The issue must be resolved by early June to arrange the summit.

Did you try to resolve the issue in the past?

When Fukushiro Nukaga, the Japanese chairman of the Japan-Korea Parliamentarians’ Union, and Takeo Kawamura, the secretary-general of the nonpartisan union, visited Korea in December last year, Prime Minister Lee invited me to his residence and the four of us dined together. “If Japanese companies offer compensation, we will also play our role,” Lee told them during the meeting. This appeared to inspire Japan to have some expectations.

I was then scheduled to visit Japan in early January. National Security Chief Chung urgently asked to meet me, and said: “Thank you for your efforts. Have a great trip.” This was after the matter was handed over to Chung.

I thought the Blue House was determined to resolve the issue. Officials working for Chung reportedly conducted a survey to estimate the number of people who would likely seek compensation through lawsuits and concluded that there were about 800.

The presidential chief of staff then suddenly changed to Noh Young-min, and Moon said the issue was still pending trial. The mood completely changed: after I returned from Japan, it was icy. I asked Chung about the situation, and he repeatedly said, “It is difficult for me.”

Then what did you do?

I decided to have a cooldown period by April, because the following weeks had the anniversary of the March 1 Independence Movement and the anniversary of the foundation of the provisional government, and resolve the issue by early May. But the government is not moving. I felt a sense of crisis that the president may not go to Japan. I told my allies in the Blue House around May 7 that it was time to make a decision.

Is it possible that Moon will actually skip the Japan trip?

I think that was actually considered. I told the Blue House that it will take maybe 10, 20 years until the trials end, and what it will do to bilateral relations. Someone jokingly responded that the prime minister may go [instead of the president] if Japan does not change its attitude.

I told them that if the president ended up not going I wanted to be informed so that I might explain the fact to Japanese lawmakers. Two days later, Moon said that he would attend the G-20 summit in Osaka next month during a TV interview. I was relieved: the Osaka G-20 summit is a big diplomatic event. Chinese President Xi Jinping and U.S. President Donald Trump will both attend - what would happen if the Korean president refused to go?

What is your proposed solution?

Moon has three principles. First, he said he respects the judgment of the court because the matter is still being tried. Second is the two-track principle that the historical issue will be handled separately from other cooperative issues. Third is that the issue must be resolved with a focus on the victims. They are all good, but we can’t stop here.

We must resolve the Korea-Japan relations for the sake of national interest based on these principles. To this end, the Japanese companies must pay a satisfactory amount of compensation to the victims, and we must create a foundation to protect our people for the victims who do not have the ability to file lawsuits.

According to a government estimate, there are about 800 victims, but it is difficult for many of them to start lawsuits against Japanese firms. The paperwork alone costs about 10 million won ($8,450). If they don’t have bulletproof evidence, there is no guarantee they will win. The government must help those people by setting up a foundation.

But isn’t this the responsibility of Japanese companies?

Yes, it is, but we also have things to do under that premise. If you look at the 1965 Treaty on Basic Relations between Japan and Korea, the first step was wrong - Japan never admitted that its colonial rule was a forced, illegal occupation and the individuals’ right to seek compensation for damages suffered during the colonial rule was not guaranteed. The Korean government at the time is responsible for this.

Korea received $500 million at the time and set up 16 public enterprises. They are now privatized and the state earned 18 trillion won. This money is originally for the victims. We can use even a small amount to create a foundation to help the victims.

Where did you get the idea?

It was originally designed during the Roh Moo-hyun administration. I was also told that the Korea Highway Corporation is willing to contribute some of its earnings from the toll fees for the project. Posco was also willing to make a contribution.

Germany had a precedent. The German government and companies created a fund of 6.5 trillion won and paid 5.3 trillion won to the victims of Nazi Germany. We can do this with a far smaller amount.

Creating a foundation requires a special law, and I am sure that the opposition parties will support it because they are also active in efforts to improve Korea-Japan relations. It just needs the Moon administration’s determination.

But Moon is very harsh toward Japan.

The president is very angry at Japan, and there are reasons. First, we shared the information on the progress of North Korea’s denuclearization with Japan, and we were very polite. National Intelligence Service Chief Suh Hoon visited Japan in September last year and informed Tokyo of the outcome of our special envoy’s visit to the North. Yet Japan never shared its information.

Moon and Abe also had two meetings in Europe last year. Chung advised Moon that he should propose a summit first, and Moon followed. But Abe ignored it both times. Chung ended up in a difficult spot.

Lastly, on the occasions when Moon met North Korean leader Kim Jong-un, he urged the North to resolve the issue concerning its past abduction of Japanese citizens and to normalize relations with Japan. Moon did Abe a favor by relaying the requests, but Abe persists with his hard-line policy toward Korea: How can Moon trust him?

But concerns are high that Moon’s approach toward Japan is too rigid.

Japan’s behavior caused the distrust, but the president needs to think seriously [to show some flexibility] for the sake of national interest. The Blue House needs to have a strategist on Japan, but I am worried that his aides are being sly on this difficult problem.

What do you think about the Gyeonggi Provincial Assembly’s attempt to pass a regulation that requires the use of stickers on school products that were made by certain Japanese companies that used Korean laborers during World War II to say “Made By War Crime Company?”

I telephoned the assembly speaker at the time and strongly dissuaded him from this. “Don’t worsen Korea-Japan relations. Don’t make a populist political show. You must have a farsighted insight,” I told him. When the Korean Confederation of Trade Unions planned to erect a statute to symbolize a forced labor victim in Busan, I also stopped them. The Blue House and the Foreign Ministry also tried very hard.