Students learn more than just kicking a ball on this pitch

Students learn more than just kicking a ball on this pitch 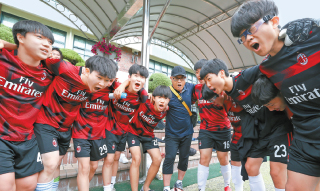 Joining a sports team is a lot more than a way for young people to stay fit, it also provides benefits off the field as well.

“The process is more important than the results,” says Kwon Man-geun, a physical education teacher at Wonmook Middle School in eastern Seoul. He tells his students to take care of themselves and show good sportsmanship.

Recently, Wonmook took on Sangbong Middle School, also from eastern Seoul, in the second round of a local school league at a football field in Jungnang District, eastern Seoul on May 18.

Three minutes after kickoff, Wonmook was able to take advantage of a golden opportunity. Goalkeeper Jung Chul-won passed the ball to forward Yang Hyun-wook. Yang dribbled around the defenders to pass the ball to Jeong Wook inside the penalty box. Jeong took the shot, sending the ball flying over the goalkeeper and into the back of the net.

Cheers exploded from the Wonmook bench, where Shin Ji-yoon, a student coach, marked down the play in a record book. Shin and Jang Kang-mulgyeol, another student coach, are in charge of the records and also help Kwon look after the team.

Everyone involved, including the two student coaches, is 14 years old.

Shin and Jang first took the coaching roles because they love football, but the biggest reason they enjoy it is because they get to hang out with their friends.

Back on the pitch, the action picked up again after the first goal. Sangbong went on the offensive, using the short passes made famous by Spanish football’s tiki-taka technique, and inched closer to the goal.

The tiki-taka technique ultimately won the day. When the final whistle blew, Sangbong was up 5-1. Rather than dejectedly heading back to the changing rooms, the Wonmook boys lined up to shake the hands of their victorious opposition. This sort of good sportsmanship, although common in professional leagues, is sometimes hard to find on the middle school football pitch where emotions run close to the surface.

“The goal of school sports clubs is to foster a mindset that respects one another and is considerate of others,” said Jung Wan-seob, a supervisor at Dongbu District Office of Education. “A child who participated in the league at least once matures greatly in terms of their character.”

Inter-school sports leagues are common across Korea. After first being introduced in 2008 with four different sporting events, local education offices now run leagues across 24 different sports. Every November, the Ministry of Education hosts a national competition where more than 2,500 teams and over 44,000 students participate.

The Ministry of Education surveyed 36,413 students who participated in school sports clubs in 2016. According to the survey, 80 percent of students thought that their experience helped them improve their physical strength, develop character and improve their emotional state.

Of the sports, football is the most popular, mainly thanks to Tottenham Hotspur’s Son Heung-min, unsurprisingly the hero of many young footballers in Korea.

But it’s not just his football skills that have made Son popular - students also praise his behavior both on and off the pitch.

“Apart from his football skills, Son Heung-min also has outstanding manners,” said the goalkeeper at Wonmook. “I want to be like him.”

“Football improves children’s confidence and is the best way of teaching in terms of fostering social skills,” said Shin Chul-rok, a physical education teacher at Bonghwa Middle School. “Children who choose to hoard the ball realize the importance of cooperation through systematic playing.

“Son Heung-min is the best hero to the kids. Students learn a lot from his good manners, that are not influenced by the result of games, and how he prioritizes the team instead of himself.”

“Participating in school sports clubs with Son Heung-min as my role model made me want to become a gym teacher and teach kids,” said Park Jang-won, a student at Myonmok Middle School.

“For somebody with such confidence in his ability, it is rare to find such humility,” read an article about Son published in the Guardian in March.

“My father told me when I was young that if I was through on goal but an opponent fell and hurt themselves, I should put the ball out and check on the opponent,” Son told the Guardian. “Because if you’re a good footballer but don’t know how to respect others, you’re nobody.”