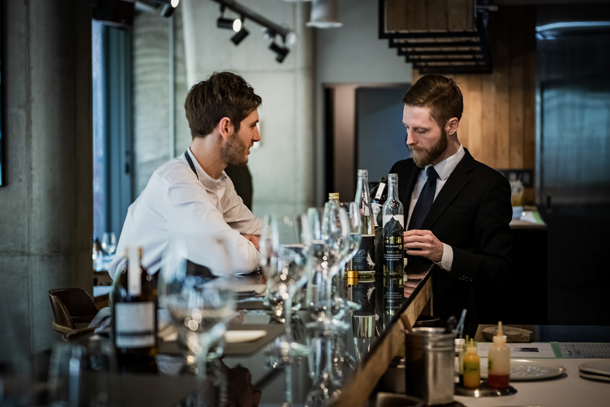 Chef Joseph Lidgerwood, left, presents 10-course meal made with Korean ingredients paired with drinks made in Korea at his restaurant Evett in Gangnam District, southern Seou. The restaurant’s traditional Korean liquor sommelier Dustin Wessa, right, put together different types of cheongju, clear part of the fermented rice or other crops, until Friday. For more, see below. [DINING MEDIA ASIA]

Restaurant Evett, run by chef Joseph Ligerwood, presents a course meal paired with Korean drinks. This week, restaurant’s traditional Korean liquor sommelier Dustin Wessa serves a variety of Korean drinks to the chef’s 10-course dinner until Friday. The restaurant is run by Australian chef who opened his own place in Seoul after falling in love with ingredients here during his travel across the country. With his working experience at French Laundry and elsewhere, he has been trying to incorporate what’s Korean into his dishes.

The food and Korean drinks gets even more special thanks to the Canadian sommelier who explains the history and making of Korean drinks in fluent Korean. Just like chef Ligerwood has traveled across the country for food ingredients, sommelier Wessa has been on the move all the time to visit towns where drink masters are.

The restaurant is set to present three events this year with their choice of Korean drinks. The first of the three is focused more on introducing Korea’s cheongju, usually clear and made with fermented rice or other crops. The second one is scheduled to happen in August with a variety of gwahaju, a mix of fermented and distilled alcohol. The third one in November will focus on takju, more commonly known as makgeolli. 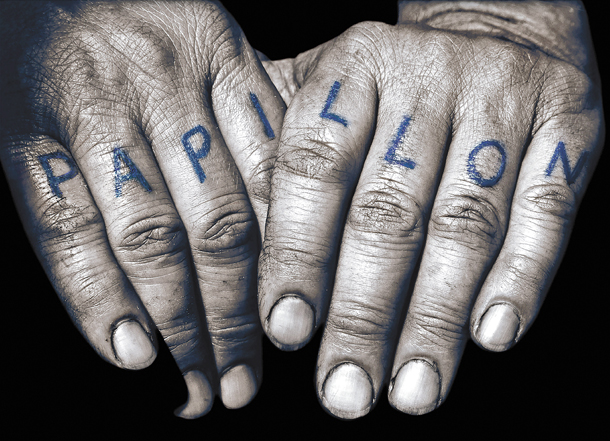 Labels of Orin Swift, a Californian winery known for its innovative attempt to make fermented grape juice, will be exhibited in Seoul for one day. The winery, established by winemaker David Phinney, who used to work at Opus One and Robert Mondavi, has been known for its artistic label as well. The labels are put together in an exhibition in Seoul for one day and Master of Wine Nicholas Paris will offer a guided tour to explain more about the stories behind the labels. The guided tour needs to be booked in advance. It starts at 3 p.m. and will last for about an hour. The exhibition will be open from 11 am. to 2:30 p.m. on the same day for the public, and again from 4 p.m. to 6 p.m.

The New Zealand Chamber of Commerce in Korea, or “The Kiwi Chamber,” hosts a wine festival in Busan under the theme “Flavours of New Zealand.”

Encouraging guests to reconnect with their favorite vintages and discover captivating new varieties, the seventh edition of the Busan festival will occur at the Ananti Cove Resort - an idyllic coastal haven just north of Haeundae Beach. It will run from 4 p.m. to 8 p.m.

New Zealand wine has experienced a strong growth in the Korean market, with sales up 39.6 percent on year, to 5.2 million New Zealand dollars ($3.4 million) in 2018.

In creating a pure New Zealand experience, both venues will offer a superb Kiwi-themed gastronomic experiences coupled with the finest service, including a gourmet buffet in Busan. The event will introduce a “Hidden Cellar Door,” where wine enthusiasts and industry specialists can discover captivating varieties new to the Korean market from over 10 wineries.

The festivals will offer raffles with many outstanding prizes, including hotel packages, gift sets and a grand prize of one economy return ticket to New Zealand from sponsor Singapore Airlines.

Tickets for the individual events are 120,000 won ($101) for Kiwi Chamber members, 140,000 won for non-members and 150,000 won in person. Group discounts are also available for 120,000 won per ticket for groups of eight or larger. For more information and registration, contact events@kiwichamber.com or visit us at www.kiwichamber.com.

To help bolster the tourism in Gangwon after the region hit hard with fire, Cultural Corps of Korean Buddism has decided to join hands with Korail Tourism Development to run train travel packages to temples in Gangwon. These programs also include tours to nearby towns, markets and spots in nature.

One going to Naksan Temple takes travelers from Seoul Station on June 8 for a two-day trip. For two days, the package takes people to a market in Sokcho and other folk villages as well. The package is 116,000 won for adults and 99,000 won for children.

The later one on June 22 takes travelers out from Yongsan Station to get to an overnight stay at Baekdam Temple. It goes to Skywalk by the Soyang River as well as a birch tree forest. The package is 89,000 won for adults, and 74,000 won children.

To make a reservation as well as to get more information, go to www.koreailtravel.com or call 1544-7755. 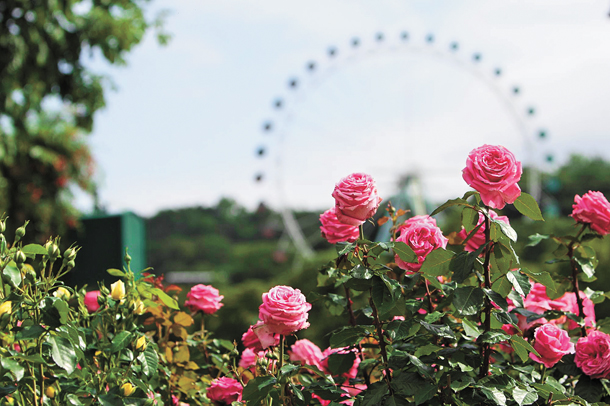 One of the country’s most popular theme parks is opening up its gardens for a flower-filled event to welcome the warmer weather. The 35th edition of the park’s Rose Festival features about one million roses of 720 different varieties in an area that’s about 20,000 square meters large. The garden is filled with different items, such as an arch decorated with roses to create a romantic ambience. Every Saturday, visitors will have the chance to make their own rose-scented perfumes for free. The program will be available four times a day on a first-come, first-serve basis. Visitors have to sign up on the spot.

For more information, go to www.everland.com.