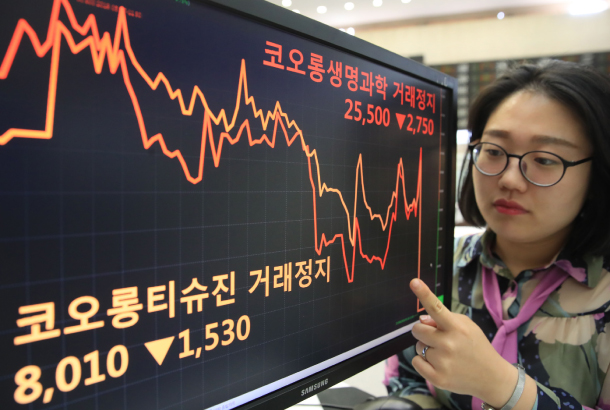 An employee at the Korea Exchange in Yeouido, western Seoul, monitors the price of Kolon Life Science shares Tuesday soon after the Ministry of Food and Drug Safety canceled the license of gene therapy drug Invossa. [YONHAP]

The Ministry of Food and Drug Safety canceled the license for gene therapy drug Invossa on Tuesday because its manufacturer intentionally hid its mislabeling mistake and lied to the ministry.

During a press conference held in Cheongju, North Chungcheong, the ministry said Kolon Life Science filed false documents to get approval for the drug and failed to provide scientific evidence to explain how its key ingredient was changed in the manufacturing process.

It said it would also file a criminal complaint against Kolon Life Science and its executives on unspecified charges.

“The documents submitted for approval of Invossa were found to have grave errors, so the ministry has decided to revoke the approval and report Kolon Life Science to the prosecution,” the ministry said in a statement.

Invossa was approved for commercialization in Korea in July 2017 and became the first drug in the world to use gene therapy to treat knee osteoarthritis. The drug was taken off the market on April 1 after Kolon Life Science found that a kidney cell line, which was not previously disclosed and approved by the Ministry of Food and Drug Safety, was included in the making of the drug.

Invossa was granted approval for commercialization on the basis that it used cartilage-originated basis cells, not kidney cells.

Kolon Life Science suspended Phase 3 clinical trials in the United States on April 1 after finding the errant cell line. It was planning to ask the U.S. Food and Drug Administration to resume clinical trials this month.

The Food and Drug Ministry has been conducting an investigation of its own and visited Kolon TissueGene based in Rockville, Maryland, and its contractors for four days last week.

The investigation found that Kolon Life Science knew about the kidney cell line being included in Invossa before receiving approval but failed to report the facts to the authority.

The ministry again emphasized that public safety is not an issue as no threatening side effects were reported during the 11 years Kolon Life Science conducted clinical trials and undertook sales. The injectable drug was administered to 3,403 patients and distributed to 443 hospitals and clinics in Korea since officially being released.

Yet the ministry said it will require all patients injected with Invossa to visit local hospitals and clinics for tests. In relation to the scandal, Kolon Life Science set up an 80 billion won ($67.2 million) fund to track the health of those injected with Invossa for 15 years. As the license is pulled, Kolon Life Science will have to start the clinical trial process all over again if it wants a new approval for Invossa.

Kolon Life Science initially argued that “technical limitations” in the early 2000s prevented researchers from properly identifying the basis cell for Invossa, saying it was only after using a more advanced analysis method this year that the company found the basis cell to be kidney-originated instead of cartilage-originated.

But Mitsubishi Tanabe Pharma, a Japanese pharmaceutical company, disputed that timeline earlier this month and argued that Kolon TissueGene, a subsidiary of Kolon Life Science, knew that an errant cell line was utilized in making Invossa at least two years ago.

The Japanese company said that Kolon TissueGene received a test result from Lonza, a Swiss manufacturing firm, on Invossa that indicated the existence of a kidney cell line in March 2017.

Kolon Life Science later acknowledged that its affiliate did receive the report in 2017, but insisted that it did not notice that kidney cells were discovered. It said Kolon TissueGene only mentioned the fact that no non-human cells were found in the results.

“The employee must have focused on the fact that there was no problem in producing the drug, not on the fact that an errant cell line was discovered,” a Kolon Life Science executive said on May 6.

Lonza conducted a short tandem repeat (STR) analysis to verify that only human cells were used, the company added.

STR analyses, developed decades ago, were only used for criminal investigations until early 2000s. It was only after 2010 that the method started being used in developing drugs.

The news of an earlier test rose the possibility that the company had been lying to the government, patients and investors all along, with many wondering why Kolon Life Science did not conduct an STR analysis on Invossa on its own.

The ministry suspects the company must have seen the problematic test result as it received relevant documents and a notice from Kolon TissueGene in an email on July 13, 2017.

Kolon Life Science is now facing lawsuits from patients around the world over the mislabeling scandal. On Tuesday afternoon, Seoul-based OhKims Law & Company said it will file a class-action lawsuit with 244 patients who were treated with Invossa.

A total of 370 people have contacted the law firm to join the lawsuit, OhKims said.

“We already knew the license would be revoked from the very beginning,” said Eom Tae-seob, a partner at the firm who is in charge of the suit.

“We believe our lawsuit will gain momentum and now has a greater chance to win as Invossa’s license is revoked.”

According to the firm, Kolon Life violated the Pharmaceutical Affairs Act because it manufactured and sold pharmaceuticals that do not match the licensed version of the drug. The lawsuit will seek monetary compensation for the cost of the gene therapy drug and psychological harm.

Each injection of Invossa costs nearly 7 million won. The law firm is asking for a total of 2.5 billion won for compensation for 244 plaintiffs.

After the ministry’s announcement, the Korea Exchange suspended shares of Kolon Life Science and Kolon TissueGene at 10:35 a.m. Tuesday until the market’s close.

Kolon Life Science responded to the ministry’s move Tuesday saying it has never attempted to manipulate or hide test results.