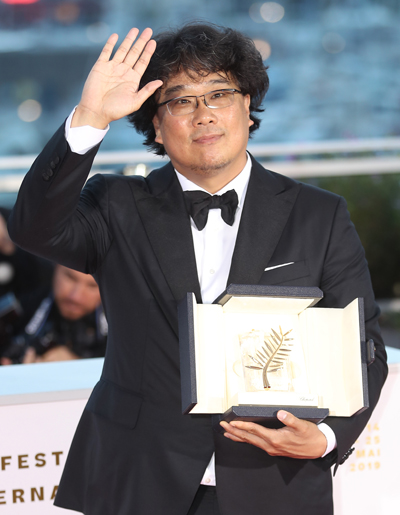 Film director Bong Joon-ho waves after winning the Palme d’Or at the 2019 Cannes Film Festival with his film “Parasite.” He produced the movie after signing standard contracts with production staff, a rare case in the Korean film industry. [ILGAN SPORTS]

LEE JI-YOUNG
The author is a deputy cultural team editor at the JoongAng Ilbo.

After Director Bong Joon-ho’s “Parasite” won the Palme d’Or at the 2019 Cannes Film Festival, the “standard contract” is garnering attention again. To film the movie, the director drafted a standard contract with production staff and abided by the Labor Standards Act. Having produced multinational project “Snowpiercer” in 2013 and Korea-U.S. collaboration “Okja” in 2017, Bong has learned how to work according to union regulations in the United States.

A standard contract is a contract that defines agreements between management and workers on the amount of wages, how wages are paid, work hours, insurance and overtime payment. It is common sense that a worker provides labor after making a contract with the user, but the custom of having a contract is still not established in the arts industry. According to a 2018 survey on artists by the Ministry of Culture, Sports and Tourism, only 42.1 percent of artistic activities in film, art and music were based on contracts. More than half of the time, people start working without even an oral agreement on how much they will be paid and when.

Of course, a contract is not a universal solution. In many cases, unfair “slavery contracts” exist between entertainers and managements. Lee Jong-seung, head of the performing artists’ union, said that some actors are paid 5,000 won ($4) per performance in plays in Daehak-ro. In such cases, actors themselves are reluctant to write a contract as it could expose their low wages.

The working conditions for artists who are not protected by contracts lead to poor treatment. A survey of 580 television and radio writers by the National Union of Media Workers last month revealed the reality that even basic labor rights are not protected. Only 25.2 percent of people signed a contract, and more than half, 52.8 percent, experienced delayed payment. Among the 420 full-time writers, only 3.1 percent are covered by the four insurances and only 2.8 percent receive overtime pay.

If you want to enjoy quality culture and arts, the rights of the cultural and artistic professionals must be protected. Fair working conditions allow them to pursue arts and lead to global competitiveness of artworks. “Parasite” is good evidence.