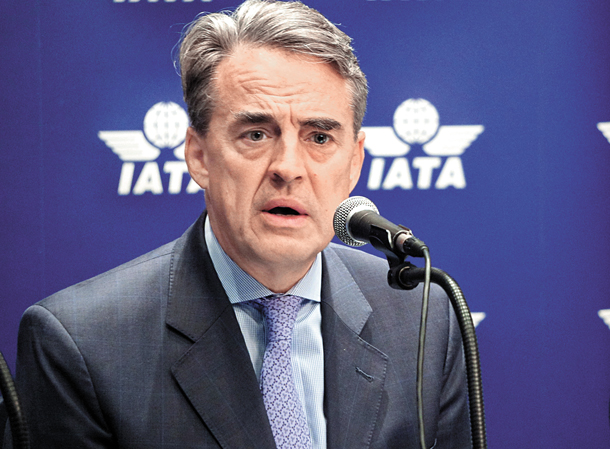 Alexandre de Juniac, director general and CEO of the International Air Transport Association, speaks during a press briefing with reporters in Seoul ahead of the association’s annual general meeting to kick off on Saturday. [IATA]

Aviation experts will gather in Seoul this weekend to discuss ways to tackle the headwinds the industry is facing including rising costs and the ongoing trade war, the International Air Transport Association (IATA) said in a press briefing with reporters in Seoul Wednesday.

The briefing comes prior to the 75th IATA Annual General Meeting and World Air Transport Summit, hosted by Korean Air, which kicks off Saturday. IATA is expecting more than a thousand aviation leaders from among its 290 member airlines to participate in the three-day event.

“The airlines will be meeting in challenging times,” said Alexandre de Juniac, IATA’s director general and CEO. “[This year] is expected to be the 10th consecutive year of airline profits, but rising costs, trade wars and other uncertainties are likely to have an impact on the bottom line.”

According to the CEO, while about seven airlines have disappeared in the last eight months due to bankruptcy, their major struggle was the rising cost of fuel, labor and infrastructure.

The prolonged trade war between the United States and China had a significant impact on the cargo business as it resulted in declining export orders, IATA said.

“April saw a sharp decline in air cargo growth and the trend is clearly negative this year,” de Juniac said.

The grounding of the Boeing 737 Max aircraft, which has been involved in two fatal accidents that killed 346 passengers, has also taken a toll on the aviation industry.

De Juniac said IATA is preparing to gather airline operators, regulators and aircraft manufacturers to discuss how to solve issues regarding the aircraft, including the time of its re-entry and new certification guidelines in five to seven weeks time.

He said the utmost priority is securing safety and also restoring the confidence of the passenger not only regarding the Boeing plane but for overall certification measures used in the industry.

Another issue to be discussed at the event is the sustainability of the industry, especially due to increasing scrutiny of its impact on climate change.

According to de Juniac, IATA has been monitoring carbon emissions of all airlines since January, and in coming years, it is planning on introducing a carbon credit system as a way to offset carbon emissions. The way carbon credits are evaluated and calculated needs to be agreed upon by different countries.

Despite the difficulties the aviation industry is facing, de Juniac said IATA is expecting a “doubling of demand for air connectivity.”

IATA said in statement that the digital transformation of airlines, infrastructure capacity, sustainability and building the workforce of the future will also be included in the agenda to make airlines ready for the changing business landscape.

This week will mark the first time the global aviation event has taken place in Korea. Currently, six Korean Airlines, including Korean Air, Asiana Airlines and Jeju Air, are members of IATA.

“Korea is a key country for us … it’s a strong airport hub,” de Juniac said. “Korea is expected to be among the top 10 passenger markets in 2036. With the right policy environment, the aviation sector will potentially support 1.5 million jobs and $138 billion in economic activity here in 20 years.”

According to data from IATA, the country’s aviation sector currently supports 838,000 jobs and $47.6 billion of the country’s gross domestic product.