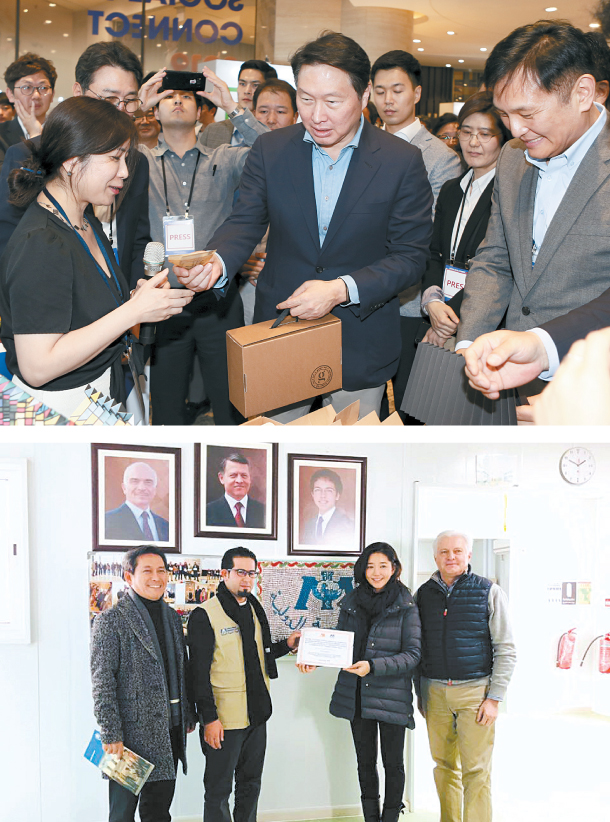 “At a time when I felt hollow, I met someone who was the exact opposite of me,” Chey said. “Since then, I have started thinking about how I should approach people.”

Chey was not answering questions as a chairman of one of Korea’s largest chaebol but as an individual pursuing social value.

He made the comments during the Social Value Connect 2019 event held at the Grand Walkerhill Seoul in eastern Seoul on Tuesday.

Although Chairman Chey did not confirm the name of the person, there has been speculation that the person he is referring to is Kim Hee-young, the president of T&C Foundation.

Kim is currently living with Chairman Chey, and they have a daughter who was born in 2015.

“Twenty-two years ago, when the previous chairman passed away and I took over as chairman, the country was going through the IMF crisis,” Chey said. “It was a very difficult time.”

He said, since then, the only thought that went through his mind was that this was war and that he needed to survive.

“I have survived, and the war is over,” Chey said. “But the person standing at the end of it all was someone who was far from a good person.

“It was the very opposite; a ruthless businessman who did whatever it took to survive.”

He said he was a person who had no empathy who only saw ways to survive, to make more money.

“I saw everything as work and didn’t see the people,” Chey said. “As such, my heart became hollow.”

But then, he said he met someone who was the opposite of him.

“That person had no interest in money and focused only on people,” Chey said. “When observing it closely, I realized I have lived my life the wrong way,” Chey said. “Although I don’t have the ability to empathize, my purpose became figuring out how to approach people through the problems in the world.”

“Earlier in the day, I was criticized for not hiring more employees with disabilities,” Chey said. “If it were me in the past, I would have gotten angry. But now I think I have gained the ability to relate a bit to think, ‘Oh, that person sees us in that light.’”

During one of the discussions, Kim Jeong-ho, CEO of Bear.Better., a social enterprise, pointed out the lack of employment of people with disabilities at SK Group.

“Recently, I read an article where SK Group announced that it will achieve the mandatory employment ratio of hiring people with disabilities by the end of this year,” Kim said. “This is something that companies like Naver and Samsung SDS already accomplished a decade ago.”

Under the Act on the Employment Promotion and Vocational Rehabilitation of Persons with Disabilities, companies with more than 100 regular employees have to fill 3.1 percent of the positions with employees with disabilities.

A total of 4,000 people from 80 organizations attended the Social Value Connect 2019 event, whose theme this year was “Paradigm shift, the age of social value is coming.”

There was 20 or so discussion with 50 exhibition booths. The participants, including businessmen, scholars and government officials, exchanged their personal experiences and views on social value.

The topics that were also dealt with included jobs, the environment and pollution.

One of the people who shared their personal experiences was actor Cha In-pyo, who is known for his charity work.

“After I adopted my children, I started to have meals with other adopting families, adopted children and adoption agencies where we would have discussions,” Cha said. “An act of expressing personal values through adoption evolved into a social value.”

The actor has adopted two children.

Park Yong-joon, CEO of Samjin Amook, a fish cake company that started in Busan in 1953, talked about how a single company could contribute to the local economy.

“I have witnessed how simple effort and changes made in reviving a company have actually saved surrounding neighborhoods,” Park said. “I decided to be the one to start saving the local economy under the belief that businesses can only move forward with the community they exist in.”

This year marks the first year.

Over the last three years, 130 social enterprise companies received 14.8 billion won in support from the conglomerate.

“I thought it would be great to gather everyone who pursues social value in one place and create a platform where they could network instead of holding an event that only assembles people running social enterprises,” Chey said.