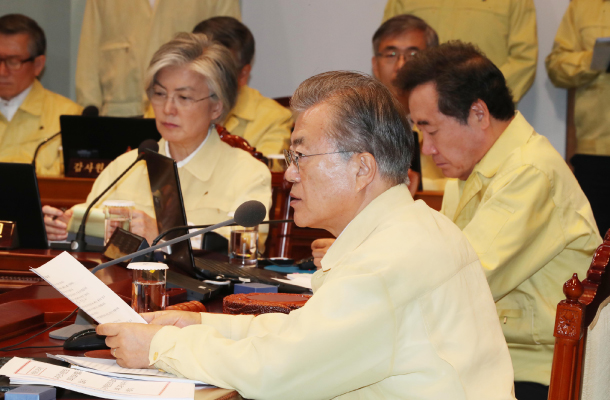 President Moon Jae-in, right, presides over a cabinet meeting in the Blue House on Wednesday. Moon criticized Rep. Khang Hyo-shang and the Liberty Korea Party for disclosing details of a phone conversation between him and U.S. President Donald Trump earlier this month in opening remarks at the meeting. [JOINT PRESS CORPS]

President Moon Jae-in bluntly criticized an opposition lawmaker and his party Wednesday for having disclosed diplomatic secrets for political gain.

Moon criticized Rep. Khang Hyo-shang and his Liberty Korea Party (LKP) for disclosing details of a phone conversation between him and U.S. President Donald Trump earlier this month in opening remarks at a cabinet meeting at the Blue House.

“An unfortunate incident happened in which a diplomatic secret of the country was leaked, and politicians used it as a source of their fights,” said Moon. “There is no justification for what happened. I apologize to the people for a public servant’s leak of confidential information.”

On May 9, Khang made public at a press conference a detailed description of the two leaders’ conversation in which Moon seemed to be begging Trump to visit Korea.

While presidential spokeswoman Ko Min-jung said Khang’s description was untrue, she refused to confirm any detail of the conversation, insisting that the state leaders’ phone conversation is a Level-3 secret in Korea.

One week later, the two countries announced that Trump would visit Korea in late June on a trip to Asia to attend a Group of 20 summit in Japan. The summit is scheduled to take place in Osaka from June 28 to 29. It was considered unusual for Seoul and Washington to announce the trip with no date or itinerary fixed.

Since then, the Blue House and the Ministry of Foreign Affairs combed through communication records and identified a diplomat at the Korean Embassy in Washington as the suspected leaker.

He returned to Korea on Sunday and is undergoing an internal disciplinary process. The ministry is planning to file criminal complaints against the diplomat and Khang for revealing diplomatic secrets.

“We will make the latest incident an opportunity to tighten the discipline of public servants and … security protocol management,” Moon said Wednesday.

Although Moon said all ministries needed to improve their security protocols, it was evident he was singling out the Foreign Ministry. Despite a series of embarrassing mistakes over the past months, Moon has refrained from reproaching the Foreign Ministry in public.

Of the designated participants in the cabinet meeting, 14, including Foreign Minister Kang Kyung-wha, came to the Blue House while 20 others joined via a video conference call from the government complex in Sejong.

“I am expressing my serious disappointment at a political party that used an extremely sensitive phone call between two state leaders as a topic of a political campaign,” Moon said, “and protecting the action by insisting that a whistle-blower offered the information because the people have the right to know.”

“If this was a political party that has governed and seeks to do so again by winning the people’s support,” Moon said, “it must at least respect the basic principles and common sense regarding issues that are fundamental in running a country.”

Moon said politicians must put national interests and security before their own in order to serve the people.

The LKP, which has defended Khang as a whistle-blower, stressed Wednesday that his disclosures were necessary to reveal the incompetence of the Moon administration’s diplomacy.

LKP Chairman Hwang Kyo-ahn told reporters that the accuracy of the disclosures about the Moon-Trump call must be verified. “The first step is verifying the truth,” Hwang said.

Rep. Na Kyung-won also criticized the Foreign Ministry for having sought a criminal probe against Khang. “The Foreign Ministry is wasting its energy on killing the opposition party, instead of doing what it needs to do in a sensitive diplomatic arena,” she said.

“Foreign Minister Kang must be replaced to reinvent the ministry.”

Na said the probe against Khang is an attempt to gag the opposition. Under the current Criminal Act, the act of divulging a diplomatic secret or searching for or collecting information for the purpose of divulging it is punishable by up to five years in prison.

“This administration previously unveiled confidential information of its predecessor and utilized it for political vengeance,” Na said. “It is saying that when it does this, it’s a legitimate disclosure, but if someone else does it, it’s a leak. From the very beginning, the Moon administration has no right to talk about protecting national secrets.”

The LKP floor leader was referring to the administration’s decision in 2017 to make public some sensitive records of the Park Geun-hye Blue House that were discovered after Moon took office. A lengthy paper trail of misdeeds left by the ousted Park was discovered on a computer system and in file cabinets within months after Moon took office. The Moon Blue House offered some of the records to an independent counsel to back up abuse of power and bribery charges against the impeached leader, her associates and major Korean companies. It also held a series of press conferences and disclosed some volatile information, such as the Park government’s handling of the Sewol ferry sinking in 2014.

Moon also hosted a National Security Council meeting ahead of the cabinet meeting for a new military and civilian exercise. He stressed the importance of defense and readiness.

Korea launched Monday the Ulchi-Taegeuk exercise for the first time, replacing the large-scale Korea-U.S. joint military Ulchi-Freedom Guardian drill. The new exercise will run through today. The Ulchi exercise focuses on the preparation of the government sector, while the Taegeuk exercise is for the Korean military. “Self-defense is a goal that an independent country must pursue regardless of the changes in surrounding security affairs,” Moon said.