Brush off your Speedos: Bodybuilding has arrived

Brush off your Speedos: Bodybuilding has arrived 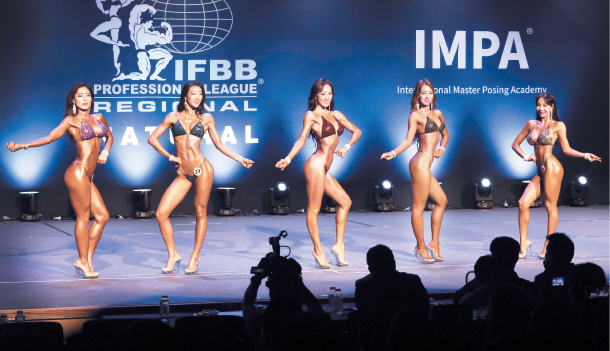 The IFBB is an internationally recognized professional sports governing body for fitness and bodybuilding. The “natural” in natural bodybuilding places its emphasis on avoiding performance-enhancing drugs, such as anabolic steroids, insulin and diuretics. The event, of which participation was open to the public, lasted the entire day.

To ensure that the competition stayed natural, the first- and second-place winners in each category were required to take an antidoping test in order to comply with rules set by the IFBB. The winners of each event are now qualified to compete internationally.

The competition was separated into a prejudging round and a final round for each of the five events: women’s figure, women’s bikini, men’s bodybuilding, men’s classic physique and men’s physique.

The prejudging round was also organized into three sections - symmetry, mandatory posing and presentation.

Mandatory posing sees the competitors run through a series of designated poses, allowing judges to see their muscles and details that may not have been visible when they were relaxed in the first round. 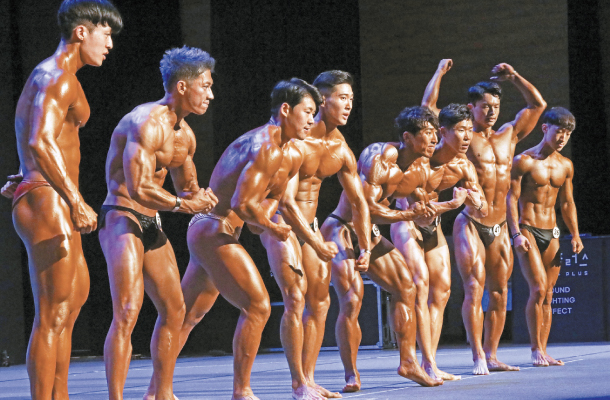 The presentation round gives competitors a chance to show off their best poses, sometimes referred to as their “most muscular” poses. Competitive bodybuilders are judged on the quality of their poses, how muscular they are, their level of conditioning, how symmetrical and proportional their bodies are and, lastly, their stage presence.

And their stage presence was impressive.

Like a scene from the movie “300,” the competitors looked like bronze statues of Spartan warriors walking into battle with their glistening abdominal muscles.

The first thing you notice when competitors take to the stage is the sheer amount of tanning that they have on. The color on top of their already impressive physiques made their muscles look as if they were protruding from their bodies under the stage lights. As the competitors appeared on stage in a lineup, the judges in front carefully examined each person while asking them to run through each required pose.

Each event was also divided into separate categories based on age and experience. Junior competitors are under 23 years of age; novice competitors have never placed first in a novice, masters or open contest; and open competitors are open to anyone over the age of 23.

The difference between the women’s figure and bikini contests is mainly muscle definition, with figure focusing on overall muscle development whereas bikini focuses on the aesthetics of the competitor in a bikini. As such, bikini is seen as somewhat more forgiving in terms of muscle size.

Nam Gi-beum, who won second place in the bikini open and is a physical trainer herself, said that she entered the competition because she “wanted to gain recognition from the people around [her] and [she] worked hard to not embarrass [herself] in front of them.”

When asked how she felt about women entering the realm of fitness and building muscle, she said that, as a trainer, there are many instances where she has to carry heavy items and deal with men and this has required her to be physically and mentally strong. For her, weight training and bodybuilding allowed her to gain this mental and physical strength, and she believed that femininity and strength “can both be achieved in full, hand in hand with femininity, through working out, weight training and bodybuilding.”

For men’s physique, Gye Ye-beum took top honors for junior, and Lee Byung-jin won first in novice. The men’s physique open was separated into sections A and B, which Kim Seung-hyun and Park Min-soo won, respectively.

The difference is even starker when you see that competitors in men’s physique wear board shorts as opposed to the classic Speedo, as men’s physique is technically judged “based on stage presence and personality” on top of their physical condition, according to the National Physique Committee, a top global physique organization recognized by the IFBB.

For the organizers of the IFBB event, the benefits of hosting the first natural competition in Korea are twofold - promote bodybuilding in the country and raise awareness about performance-enhancing drugs.

Although Koreans have individually competed in competitions abroad - notable examples being Soon Hwang-chul who won second at the Musclemania World Champs 2009 in the United States and Jhi Yeon-woo who won the 2013 Arnold Classic Europe for women’s physique - they were by no means household names. And although bodybuilding competitions themselves have existed in the country, it had yet to garner mainstream attention until recently.

Choi Yoon-sun, one of the organizers of the IFBB pro natural event, said she was motivated to host the competition in Korea because, according to her, amateur bodybuilders here are still coming to terms with what does and doesn’t count as a performance-enhancing drug.

Prior to the event, organizers insisted that drug use is not a serious problem in Korea and that most competitors are unaware of the issue. Yet the Korea Anti-Doping Agency (KADA) found 28 cases of doping among elite bodybuilders in 2017 alone, and a 2017 study in the Journal of Substance Abuse Treatment, Prevention, and Policy did a cross-sectional study of 454 Korean elite athletes and found that 39 percent of adolescent athletes and 53.4 percent of adult athletes “had knowledge of banned substances and had permissive attitudes toward doping compared to those who were unaware.”