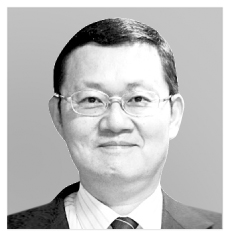 Lee Jong-wha
The author, a former economist at the Asian Development Bank, is an economics professor at Korea University.

Chairing a meeting to examine and better plan public finances, President Moon Jae-in questioned why public finance integrity should be so dependent on the national debt to gross domestic product (GDP) ratio. The finance minister just reported that national liabilities are now 40 percent of the GDP. The president then added that Korea can still afford “aggressive” fiscal action.

The president was recommending higher fiscal spending to aid the economy in a downturn even at the risk of stretching the fiscal deficit. Korea performed the worst in the first quarter among the member economies of the OECD. The job situation remains dire. Export prospects have darkened because of the slowing global economy and the trade war between the United States and China. Aging population and waning productivity have weakened our growth potential. An active government role is pivotal to revive the economy and address structural challenges. The 40-percent debt share against GDP should not stop the effort.

Yet even if the government wants fiscal expansion to help the economy, it must implement the best-possible policies because inappropriate spending can undermine the longer-term fiscal integrity. Instead of generous handouts, public funds should go into grooming talent, enhancing social infrastructure and backing structural reforms and innovation. The tax code also needs to be fixed so that the corporate sector can increase investment and innovation.

After its annual review on the Korean economy, the International Monetary Fund (IMF) advised the government to increase fiscal spending to support the economy. It prescribed efforts to lessen inefficiency in fiscal management, increase female and youth employment, and support labor and structural reform. In short, it advised more spending to boost the country’s potential to grow and reduce interference in the market to the minimum.

The IMF warned that excessive government intervention can only depress private-sector employment. It pointed out that full-time jobs increased in the public sector but their productivity is lower than the private sector. For instance, if the government increases public child care facilities, it may discourage the private sector in terms of investment in such facilities. A larger quota for the hiring of government employees may lead to more young people studying for the state exam to secure public job instead of aggressively seeking jobs in the private sector. Overall, the youth unemployment would only worsen. The IMF also suggested tax code reform in terms of lowering the rates and broadening the base. High tax rate discourage individual labor and corporate investment and in the longer run slow the economy.

The Moon Jae-in administration has been eagerly expanding fiscal spending over the last two years. The fiscal budget grew by 7.1 percent in 2018 and 9.5 percent in 2019, the highest increases since 2009, just after the global financial crisis.

A deficit is inevitable if expenditures exceed income. Since the government would have to issue new debt to contain the deficit, national debt would increase. Government debt has reached 725.6 trillion won ($607.5 billion), equal to 40.7 percent of Korea’s GDP last year, according to the IMF. The share is modest when compared to the average of 100.3 percent reported by 34 developed economies. But the ratio against GDP will rise sharply if social benefit expenditures should increase in line with the aging population and if the economy remains slow moving.

The national debt, as calculated by the IMF and the government, does not include liabilities of public enterprises and losses in government employee and veteran pensions. If you include such liabilities in the national debt, the aggregate public-sector debt actually would exceed 60 percent of the GDP. Last October, Standard & Poor’s warned that Korea’s fiscal integrity could worsen under the load of debt in public enterprises.

The current value of the future liabilities of government employee and veteran pensions total 940 trillion won. The cost will only go up because of the aging population. The IMF, in its Fiscal Monitor report in April, estimated that the Korean government’s share of pension and health insurance costs would equal 160 percent of the GDP by 2050, the highest among all developed economies. If there is too much public-sector debt, investors may question the government’s capacity to meet future debt obligations. Investors would lose interest in government bonds and dump their holdings. The yield would jump because of the risk premium, making it more costly for the government to meet interest payments. Latin American economies in the 1970s and ’80s, as well a Greece and Italy following the 2008-2009 financial crisis, had to seek a bailout from the IMF because of their fiscal crises resulting from heavy debt.

Some claim a national default is not a problem since the central bank can print money to pay off the debt. Yet too much monetary expansion only fuels inflation. Since the Korean won is not an internationally traded reserve currency, depreciation would trigger capital flight and cause a liquidity crisis.

The government needs not fear debt issuance if it is really necessary. But one should be smart in financing by maximizing the returns while minimizing the risk. National debt is billed to future generations. The government must aim to vitalize the private-sector economy and boost growth potential through constructive spending and tax reform. At the same time, it must reform the public enterprises and pensions for long-term integrity in public finance. The government and legislature should be extra careful and smart in managing the public finances so as to save the economy without burdening future generations.