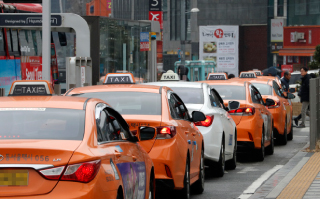 CHUN YOUNG-SUN
The author is an industrial team reporter at the JoongAng Ilbo.

I can do my job thanks to taxis. Especially when I first became a reporter, I had to be in the office before mass transit started running in the morning. My friends would say I should save up the taxi fares to buy a car, but I didn’t feel the need.

The main reason was that taxi fares were affordable. I calculated that taking taxis was absolutely cheaper than paying for a small car, gasoline, parking, taxes, insurance and a driver when I was drunk. I still feel the same way. Taking a taxi throughout the month adds up to only one-third of what I would pay for a car. When I take a taxi, I can also talk freely on the phone.

I’ve used “Tada” a few times and found it convenient. Yet it was not enough to change my commuting pattern. The biggest reason is the cost. It’s 20 percent to 30 percent more expensive than taxis. As I use taxis almost every day, I hail cabs without thinking.

As a regular taxi user, I have two thoughts about the discord between Tada and the taxi industry. First, the taxi industry’s anxiety is excessive. Unless prices soar, there’s no reason for existing customers to suddenly ignore taxis. The taxi industry already has the upper hand by operating with legal licenses issued by the state. So it’s quite an exaggeration that they will go bankrupt because about 1,000 Tada cars are on the road.

Another thought is that I find it embarrassing to praise Tada as an innovative service and a case that illustrates the possibility of a sharing economy. While it is described as a “mobility platform,” it is just another means of transportation, a kinder version of a taxi, while it is marketed as a rental car sharing both the driver and the van. Tens of billions of won have been invested and it is still in deficit, so I cannot predict how it will change.

What’s regrettable is categorizing Tada as an innovation and existing taxis as a long-standing evil. When they clash over the same business, why is Tada right and taxis wrong? Many point out that taxis haven’t improved their services for a long time and I have also experienced many unpleasant incidents. Yet it cannot be the justification to take away taxis’ turf. Lately, I’ve met drivers who benchmarked Tada’s style. They don’t brake suddenly and refrain from turning on the radio loudly in order to make passengers more comfortable. They are also more willing to go to smaller streets. It’s Tada’s positive impact of on the market. They should find a middle ground — driving the market to the extreme is not good for anyone.