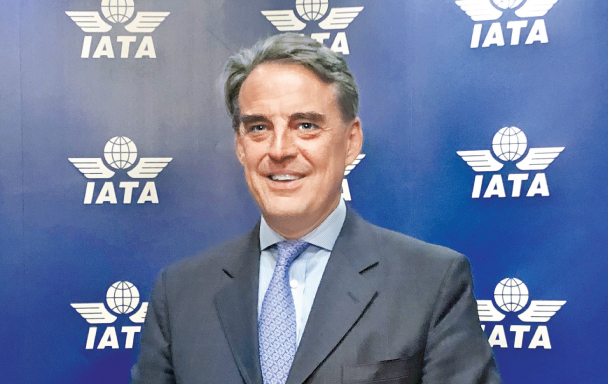 Alexandre de Juniac, director general and CEO of the International Air Transport Association, poses for a photo after a press briefing with reporters in Seoul on Wednesday. [KIM JEE-HEE]

Alexandre de Juniac, director general and CEO of the International Air Transport Association (IATA), praised the efforts of Korean Air in hosting the association’s annual general meeting in Seoul and advised the country’s regulating authorities to step away from overregulation for further development of the industry during an interview with a group of reporters in Seoul on Wednesday.

IATA is a global airline standard setting body consisting of some 290 member airlines. It is holding its annual summit in Korea for the first time this weekend, with Korean Air as the host. In Korea, six airlines - including Korean Air, Asiana Airlines and Jeju Air - are members.

“It was kind of normal to see Korea hosting the AGM at this stage of development of aviation in this country,” de Juniac said. “[Also] it’s the 50th anniversary of Korean Air, so it was a good date, at its birthday.”

The CEO also touched on the efforts of Korean Air’s late chairman, Cho Yang-ho, in organizing the AGM.

“Chairman Cho […] has been a key player in this industry by developing Korean Air and putting Korean Air first row among the best airlines in the planet,” de Juniac said. “He has been very, very active in organizing […] this assembly, and we are very sad he is not able to attend because this AGM in Seoul is what he did.”

On the temporary leadership vacuum created at Korean Air because of the sudden death of Cho and also at Asiana Airlines due to financial difficulties, de Juniac said, “Any disruption, big disruption, in management is not good news for the company but it’s not only true in Korea.”

He said that stability, continuity and vision are key elements that managerial teams in the aviation industry should always have, adding that a good regulatory framework must be in place for airlines to prosper.

The support of the authorities is key in such a highly regulated industry, de Juniac said, adding that overregulation and misalignment with international standards need to be resolved in Korea.

The director general raised one example, introducing an international convention called the Montreal Protocol 2014 that establishes rules to deal with unruly passengers.

Korean authorities have yet to ratify the convention, according to de Juniac.

He also said the penalties imposed on tarmac delays should be improved in a way that supports passenger convenience.

De Juniac shared his view on the prospects of the global aviation market.

As low-cost carriers are rapidly expanding their presence in both Korea and around the world, de Juniac said he expects the trend to continue as there is demand for value-for-money travel options.

The low-cost model has expanded everywhere in the world, he said. The only place where low-cost growth is relatively slow is in North America, according to de Juniac.

“In Europe and Asia, [low cost is] probably the fastest growing sector in the airline business and it should continue,” he said.

For the survival of full-service carriers, de Juniac said they should focus their activities by service level.

“They keep full service […] with full fares, and they have low-cost networks […] to address low-cost parts of the market,” he said, explaining what full-service carriers are already doing in the market to survive.

When asked whether the aviation industry will also adopt electric airplanes to reduce its carbon footprint, de Juniac said IATA and aircraft manufacturers are exploring new propulsion systems, whether they use electricity, hydrogen or something else. He, however, said “we will not see an electrical aircraft working in the transportation area except for regional [services], perhaps,” in the next decade or two.

“First of all, scientifically and technologically things are not ready. Secondly, particularly important these days, when you put a new aircraft, a new technology, in service, you have to be sure that it is safe.”

While the new Boeing 737 Max planes were thought to be growth engines for a lot of budget airlines, two recent fatal accidents left them grounded. IATA is expecting to hold a meeting with regulators, airline operators and aircraft manufacturers to discuss how to solve the problems involving the plane in the next five to seven weeks.

De Juniac became the seventh person to lead the IATA in September 2016. He has almost three decades of experience in both the private and public sectors including serving as Chairman and CEO of Air France-KLM from 2013 until 2016.