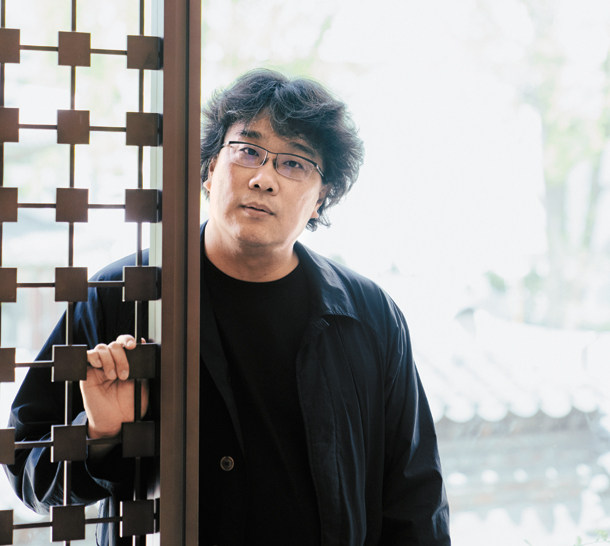 Director Bong Joon-ho finally did it. After two nominations for the Palme d’Or at the Cannes Film Festival, his film “Parasite” won the top prize at the festival, a major honor for the Korean film industry, which is celebrating its 100th anniversary this year.

“I think the film gives a nudge to people to think about how people treat one another in terms of politeness and dignity, regardless of how poor or how rich a person is,” said Bong at a press conference on Tuesday after his latest film, “Parasite,” was screened for the first time in local theaters. The film hit theaters on Thursday and made up over 75 percent of all presales, ranking No. 1 in the local box office as of Thursday afternoon according to statistics from the Korean Film Council. Over 517,000 moviegoers have already reserved their tickets for the film.

After Bong arrived in Seoul on Monday, the director had no time to catch his breath, as he spent the rest of the day and night checking the sound and screen system in every theater at the Yongsan CGV in central Seoul before the film’s Korean press premiere. Despite how tired he must have been, Bong still remained bright-eyed and energetic in an interview with the Korea JoongAng Daily at a cafe in Samcheong-dong, central Seoul, that discussed the details behind the intent and production methods of his Palme d’Or-winning-film. The following are edited excerpts from the interview.

Q. Did you receive any other praise or comments about your work from the jury?

A. About my work, nothing other than what the press knows. At the reception hall, the jury mostly asked questions about the house, as many of them were directors too. They were all asking “Where did you find such a perfect house?” They didn’t know that everything was a set, so there was a sense of thrill when I told them everything was a prop. I’m extremely proud of my art team for creating the perfect setting. However, Elle Fanning came to me and praised the actresses’ acting. As she is an actress herself, she was really interested in how the film captures the actresses’ charisma. Although she didn’t understand Korean, she thought their nuance and tone was captivating, and their rhythm and tempo in the film was so smooth and vivid. 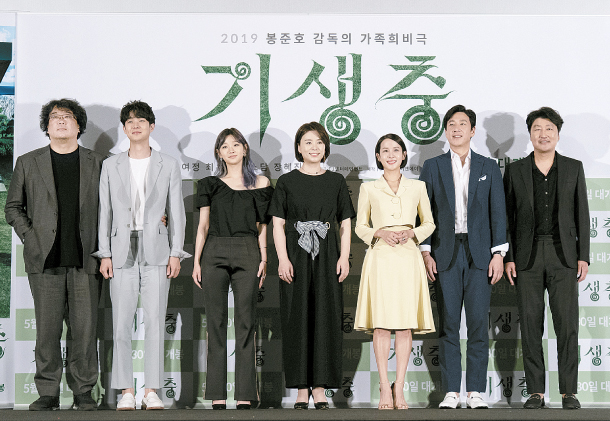 How do you feel about the phrase “Bong has become a genre unto himself”?

I feel good. From the foreign press, I’ve often heard that my works are genre-bending, but I’ve actually never felt it. For me, I don’t decide on a specific genre when I start filming. I guess I’m just trying to portray people’s everyday lives and feelings, so that may be why others feel that my films don’t have a specific genre. Like when you go to work, something funny might happen that would make it a comedy, and after work when you’re going home at night and feel that someone is following you, it suddenly becomes a thriller-horror. Our everyday lives consist of a diversity of genres, and that is what I want to depict in my works. But I think it would be easier to give interviews from now on because I could just say, “I’m a genre myself. What more words do you need?” (laughs).

What were the motivations behind your latest film? Did you have any spark or moment where you felt “this is it?”

I know that the answer to this question would be so much more interesting if there was a clear inspiration behind the film, but there wasn’t. From the start, it was going to be about two opposing families - one rich, one poor. But the plot is derived from my personal experience of tutoring. When I was in college, like Ki-woo in the story, I had experience tutoring a ninth grader, and I remember the first time I entered his home … It was a luxurious villa, and the first thing I saw when I entered the gate was the well-maintained garden. I also remember how quiet the neighborhood was, and meeting his mother, so there are moments in the film that are derived from my personal experience.

You always seem to go over social issues in your films, especially highlighting the differences in social hierarchy and telling them from the perspective of social minorities.

For “Snowpiercer” and “Parasite,” yes, I definitely do want the audiences to think about such issues through my works. But I think it’s natural for any writer or artist to create a piece that reflects the happenings of contemporary society. In the era of capitalism, we are never completely free from the clutches of materialism that divides people into the rich and the poor. So I think it would be strange not to go over such issues as a creator.

The ending had a decisive tone of a tragedy, although you’ve described the film as a tragicomedy. You didn’t think there was a way for the characters to become symbiotic?

I cannot deny that [the ending was a tragedy]. It’s more sadness though, rather than it being just tragic. Ki-woo was definitely hopeful [at the end], but from a third perspective, could we feel the same?

At the ending credit, the audience will be able to hear a song that Choi Woo-shik [who played Ki-woo] sang, which I wrote. Though the song itself isn’t that hopeful either, there is a sense of determination that Ki-woo would continue to carry on with his life. He will live, no matter how harsh the reality is.

In the “Snowpiercer,” the characters are eventually able to escape the train and go outside, and there are glimpses that show that the ecosystem is recovering, but not entirely. The survivors will have a hard time making a living out of the harsh environment. In “Okja” as well, the girl and the pig are back in the mountains, but will it ever be like it was before? No. They’ve gone through a lot, and the characters have matured, although somewhat painfully.

All of my endings are like that. The characters are holding on to whatever life they have, very feebly, but they’re there. You can see that they’re struggling. But isn’t that more honest and closer to our reality than an ending full of hope? I always wonder whether if I chose an easier path of making everyone happy, would the audience feel as strongly as they do now.

If you could pick one symbolic scene that you remember the most throughout the entire film, which one would be it?

There’s a scene where Ki-woo [Choi] climbs a snow-covered mountain. I will always remember that scene. I don’t know if the scene can symbolize the entire content of the film, but I always have a feeling of satisfaction and thrill when I watch that scene. That was the very last scene we had left, and I wanted it to be a snowy winter, so our crew waited. But there was no snow this winter! Throughout December and January, I was going crazy, my eyes were glued to the weather forecast for any news of snow.

When I couldn’t stand waiting anymore, I just announced to the crew, “Feb. 15. That’s the date. Snow or no snow, that’s when we’re going to shoot this last scene. If it doesn’t snow, then art team, get ready to cover everything with salt.”

But on that day it finally snowed! So you see how proud I must feel about that scene, and I think [the scene] also represents the charm of making a film. The process is often hard, arduous and an agony, but it’s moments like these that become the thrill and motivation to continue doing this job.

Can you describe to us how you felt right before the juries announced the Palme d’Or and your feelings right after you received the prize?

Actually, my head sort of emptied and I became even calmer. But I was sitting at the very end of the row in case I would receive a prize, and right next to me sat Song Kang-ho, some of my crew, and other CJ organizers, whom I could see were all jittery and you know, basically going crazy (laughs).

After the announcement, I was still a bit numb, but my entire body was moving forward and backward because of Song, who was shaking me and shouting. And since I couldn’t just stand there being shaken like a rag doll, I did a motion, raising my fist into the air. But all of my movements right after the announcement came from Song (laughs).