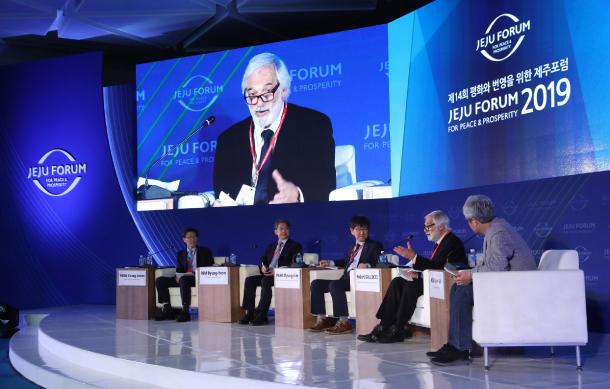 Robert Gallucci, a distinguished professor of diplomacy at Georgetown University, speaks on Wednesday at the 14th annual Jeju Forum for Peace and Prosperity in a session titled “Creative Roadmap for Denuclearization and Peace on the Korean Peninsula.” [WOO SANG-JO]

Pyongyang isn’t responding to calls from the United States for working-level denuclearization talks because U.S. President Donald Trump’s administration has “trained” the regime to only want to deal with the White House chief, said Robert Gallucci, who was the top U.S. negotiator in the 1994 North Korea nuclear crisis.

Gallucci, now a distinguished professor of diplomacy at Georgetown University, technically blamed the Trump government for causing the impasse during a forum on Jeju Island Wednesday, saying that in the current situation, it is “very hard” for someone lower than the U.S. president to engage with the North - and for the North to have any reason to believe that Trump will do what that person claims he will do.

“That makes it very hard on a negotiator,” said Gallucci. “It’s one of the reasons why starting at the top is not a terrific idea.”

Gallucci made the remark after taking a question from the moderator at the 14th annual Jeju Forum for Peace and Prosperity in a session titled “Creative Roadmap for Denuclearization and Peace on the Korean Peninsula.” Gallucci was one of four panelists who shared their opinions on how to end the U.S.-North Korea stalemate after their second summit in Hanoi, Vietnam, in February broke down.

When asked whether he thinks North Korean leader Kim Jong-un learned the importance of holding working-level talks before a summit with Trump based on his experience in Hanoi, Gallucci suggested the opposite.

“When the president does all the work,” he said, referring to Trump, “then the North Koreans don’t want to talk to anybody below the president because they’re used to dealing with the president.”

He added, “We’re in a situation which we created an expectation that they will get President Trump.”

As head of the U.S. delegation for nuclear talks with Pyongyang in the early ’90s, Gallucci represented the U.S. government as it signed the Geneva Agreed Framework on Oct. 21, 1994. His North Korean counterpart was Kang Sok-ju, then first vice minister of foreign affairs. The agreement, reached after lengthy talks with the regime, came as the Bill Clinton administration was considering a pre-emptive air strike on the Yongbyon nuclear facility with precision-guided bombs.

The crisis temporarily ended after the Agreed Framework was signed, through which the United States offered to finance and supply light-water reactor power plants and heavy oil for the North in exchange for a freeze of operations and construction of reactors suspected of being developed for nuclear weapons.

Gallucci also chided Trump’s stance on the Hanoi summit - that the North Koreans “do everything before we do anything” - saying it was “outrageous.”

“I think the president has to change the view he expressed in Hanoi,” said Gallucci.

For Pyongyang, getting rid of their nukes is “hard enough,” he stressed.

Even that process, he continued, won’t be easy to verify, which is why the United States should sign some sort of a political statement that there are no nuclear weapons or fissile material left in the North, though realistically, there was no way to be 100 percent sure.

Yoon Young-kwan, professor emeritus in political science and international relations at Seoul National University (SNU) and a former South Korean foreign minister, moderated Wednesday’s session. Yoon said it was time for Trump to seek some sort of a political advancement with North Korea regardless of the level of progress made in denuclearization talks.

Yoon specifically mentioned a declaration officially ending the 1950-53 Korean War, which ended in an armistice, not a peace treaty.

Kim Byung-yeon, an economics professor at SNU, one of the four panelists, suggested that the United States could use the Kaesong Industrial Complex as leverage in talks with the North to pressure the regime to dismantle some of its nuclear facilities, including Yongbyon.

Park Myung-lim, director of the Kim Dae-jung Presidential Library and Museum at Yonsei University in western Seoul, advised Seoul, Washington and Tokyo to come together to think of ways to bring Pyongyang into the international society. One way, he said, could be for the three countries to simultaneously establish liaison offices in Pyongyang in exchange for North Korea’s acceptance of inspections of its nuclear facilities and rejoining the Non-Proliferation Treaty.