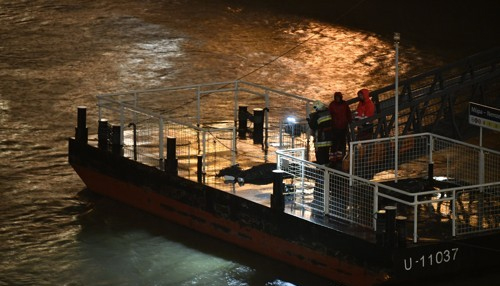 “Of the 33 South Korean passengers, 7 have been rescued, 19 are missing and seven have died,” the ministry said in a statement Thursday.

The South Korean Embassy in Hungary said it is cooperating with local authorities in Hungary at the site to assess the situation.

“President Moon Jae-in has been made aware of the situation and he has ordered immediate cooperation with authorities in Hungary for the rescue work and that the relatives of victims’ families be contacted immediately,” the Blue House spokesman said in a statement.

International media outlets have reported that there were a total of 34 people on board the boat when it collided with another and that heavy rain and strong currents have been slowing down the rescue operation, with one passenger reported to have been pulled out of the water 2 miles downriver from the incident.

"We cannot confirm why the boat sank ― it was just an average day, and this was a regular trip,” a spokesman for the company that operated the boar, reportedly called the Mermaid, told CNN. “We carry out thousands of tourist boat trips every day, there were no signs that something like this could happen.”