This season, the SK Wyverns have such strong starting pitchers that it seemed unlikely the backup pitchers would ever get a chance to start. 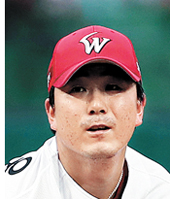 But the stars aligned for Jo Yeong-u after the Wyverns’ fifth starter Moon Seung-won left the rotation due to an injury. Jo was given a chance to replace Moon on Thursday against the KT Wiz.

Despite the short notice, Jo had an impressive game by giving up only one run and two walks while striking out three in four innings. As Jo didn’t toss five innings, he had to walk away with a no-decision, but the Wyverns won the game 3-2. For that game, Jo had a 2.25 ERA.

“After I struggled, I barely got to play in the KBO,” Jo said. “This is the first time in almost five years that I have played as a starter.”

Jo’s regularly made his name onto the Eagles’ entry, but rather than getting on the mound during games, he tossed balls during warmup training before play actually began.

“I really wanted to play in a lot of games, but I just literally filled up a spot in the entry,” Jo said.

After two seasons of doing nothing with the Eagles, Jo joined the Wyverns as a compensation player for Jung Woo-ram, who signed with the Eagles as a free agent after the 2015 season. Jo took a break to fulfill his military duty by joining the Sangmu baseball team, undergoing elbow surgery in his second season there.

“I tried not to get surgery at first, but since I thought it would be better to start preparing for the upcoming season while in the military, I decided [to go through with it.]”

Once he was discharged, Jo spent one full season rehabilitating, and finally, on April 30, he re-appeared in the KBO during a Wyverns’ game against the Kiwoom Heroes. Although he gave up five runs in one inning, it was a memorable return for Jo as it was the first time in four years he had stood on the mound during a KBO game.

Following the game, Jo was sent down to the Futures League and started training to be a starting pitcher. In four games as a starter, Jo picked up two wins and a loss with a 3.38 ERA, good enough to get called up to the Wyverns’ roster.

“When I first started, it had been so long that I felt awkward with the atmosphere of the baseball stadium,” Jo said. “It’s a lot better now. Playing well in the Futures League is not that impressive. I have to play like that to get called up to the top team.”

This season, the KBO is seeing a lot more backup starters seeing success, most notably Lee Hyun-ho of the Doosan Bears and Jang Min-je of the Hanwha Eagles. While Jo has also been given the chance to be another successful backup pitcher, for now, he is focused on minimizing the damage from the loss of Moon.

“Since I’m just temporarily replacing Moon Seung-won, who is injured, my goal is trying not to damage the team,” Jo said. “I want to play the best I can within my ability.”