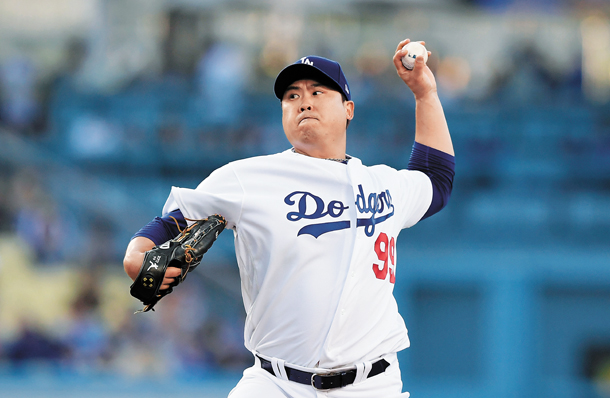 Ryu Hyun-jin of the Los Angeles Dodgers has done it again.

By tossing a scoreless seven and two-thirds of an inning against the New York Mets at Dodger Stadium in Los Angeles on Thursday, Ryu picked up his eighth win of the season and has finished the month of May with an ERA that tops not just the national league, but the entire MLB.

Throughout Ryu’s 106 pitches, he gave up four hits, a walk and no runs while striking out seven.

After taking the first three outs to start the game, the Dodgers batters got off to a quick start by adding a run at the bottom of the first to help Ryu pick up another win. However, after the first inning, the Dodgers struggled to score.

At the top of second, Ryu gave up a walk to Todd Frazier for the first time since the first inning against the Cincinnati Reds on May 19.

Although he gave up another hit right after it to Carlos Gomez, Ryu still managed to finish the inning without giving up a run as Adeiny Hechavarria hit an infield fly and Ryu struck out Tomas Nido.

Then, at the top of the seventh, Ryu gave up a two-base hit to Pete Alonso, but once again completed the inning without a run by getting three outs with two ground balls and a fly.

Having tossed 100 pitches, Ryu once again got on the mound in the eighth inning but left after getting two outs with a batter at first.

As the Dodgers scored another run right after Ryu left the mound, the final score was 2-0.

“I could throw it for strikes and make them chase when I wanted to,” Ryu was quoted as saying on MLB.com. “Commanding my pitches gives me confidence.”

Following the game, the Mets manager Mickey Callaway also complimented Ryu’s performance as he said, “it’s like a left-handed Greg Maddux out there or something.”

By picking up another win, Ryu once again lowered his ERA from 1.65 to 1.48. Of the major league starters, Ryu is the only pitcher to keep his ERA below 2.00 this season.

“This month of May is incredible,” Ryu was quoted as saying on MLB.com. “I’ve always told everyone I want to throw six, seven innings to put the team in a position to help the team win, but I haven’t always been able to do it. But this month, I definitely was able to do it and it’s unbelievable.”

Ryu’s had a dominant May, with a 0.59 ERA across six games. He picked up five wins and a no-decision. During this time, Ryu tossed 32 scoreless innings and a complete game on May 7 against the Atlanta Braves.

This allowed Ryu to become the most likely pitcher to win the prestigious National League Pitcher of the Month Award as he has the lowest ERA. If he wins, Ryu will be the second Korean pitcher ever to win the award. Before Ryu, Park Chan-ho won in 1998 for the month of July, also while playing for the Dodgers.

“I think, with his stuff, he could survive in any era,” Dodgers manager Dave Roberts was quoted as saying on MLB.com. “It’s always a good thing to command the baseball and to use different pitches. Hyun-jin’s balls in play are converted into outs more than any of our pitchers. Right now, as an outlier, with the defensive metrics, that gives him an even better opportunity.”

Then, he picked up another against the San Francisco Giants on April 2. Although Ryu briefly left the Dodgers’ starting rotation due to a recurring left groin injury, he didn’t waste much time getting back on the mound.

Looking at Ryu’s statistics this season, he is showing great control in his pitches, as he has only given up five walks while tossing 73 innings. In the 11 games Ryu started in this season, he has had quality starts in nine.

Based on such a strong performance, there has been talk that Ryu could make his debut in the All-Star game this year, but he insists he is not yet thinking about that as there’s still a month to go.

“I think it’s too early for that conversation,” Ryu said during a post-game press conference.