Benchmark rate held, but one vote is cast for a cut

Benchmark rate held, but one vote is cast for a cut 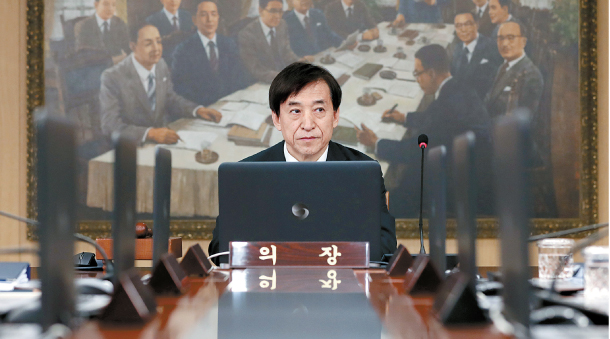 Bank of Korea Gov. Lee Ju-yeol during a monetary policy board meeting in central Seoul on Friday. [YONHAP]

The central bank kept the benchmark interest rate unchanged on Friday in line with market expectations, though one of the board members advocated a cut.

“The monetary policy committee held the key rate at 1.75 percent, considering the external conditions that require consistent monitoring, low inflation with the possibility of inching up later and the need to maintain financial stability,” the governor said during a press briefing after the rate setting meeting.

The base rate has remained unchanged for six months. The last time the bank adjusted the rate was in November, when it added 0.25 percentage points to the previous 1.5 percent.

The highlight was a dissent from Cho Dong-chul, who voted to lower the rate. A differing opinion is often a prelude to a shift in monetary policy direction.

Governor Lee was firm however, saying that the vote is only “one person’s view rather than the majority of board members.”

The bank’s chief also said that the current economic conditions do not warrant a rate cut.

“I know there have been expectations for a rate cut,” he said, “But if you look at both the macroeconomy and financial stability, it’s not the time to respond with a rate cut to deal with the situation.”

Hyundai Research Institute suggested in March that the central bank change its stance.

“In terms of monetary policy, [the Bank of Korea] needs to consider a pre-emptive rate cut based on the state of domestic demand,” the institute said in a report.

“The reasons for a rate hike have been significantly weakened, given the possibility of the U.S. Fed easing the pace of rate increases and the slower growth rate of household debt levels.”

Korea Development Institute noted that the economy is beset by unfavorable domestic and external conditions, including sluggish exports, a tepid job market, weak investment, the ongoing trade dispute between the United States and China, geopolitical and economic uncertainties related to Brexit and North Korea.

The gloomy outlook has led economic institutions and the central bank to lower their gross domestic product forecasts.

Korea Development Institute slashed its economic growth outlook for the country this year to 2.4 percent from 2.6 percent, matching the OECD’s forecast.

The central bank trimmed its outlook from 2.6 percent to 2.5 percent.

“If worsening signals occur in terms of the macroeconomy and financial stability, a rate cut is possible potentially in the third quarter.”

The 6.7 trillion won ($5.6 billion) supplementary budget, which included a stimulus package, was submitted to the National Assembly last month and has remained there.