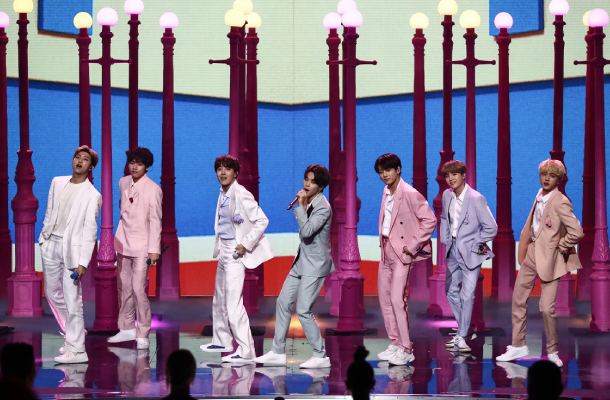 It’s the start of summer, and the list of headlines generated by BTS and its agency Big Hit Entertainment continues to grow. BTS will be holding two concerts at Wembley Stadium in London, and member Jin became a member of the Unicef Honors Club. Bang Si-hyuk, the mastermind behind Big Hit Entertainment, was named International Music Leader by Variety for the second time Thursday.

BTS isn’t the first K-pop act to stand on the stage of Wembley Stadium, as singer Psy led an audience there as they danced to “Gangnam Style” (2012) in 2013, but BTS is the first-ever Korean band or artist to hold its very own solo concert at the venue. Only the biggest stars have held concerts at the stadium: The Rolling Stones, Madonna, Elton John, Celine Dion, Tina Turner, Guns and Roses, David Bowie, U2, Bon Jovi, Oasis, Michael Jackson, The Beatles, Beyonce, Eminem and Ed Sheeran. The septet was initially scheduled to perform just once on June 1 but added another day when the tickets to the first day’s 90,000 seats were sold out in 90 minutes.

Their concert comes after their performance at “Britain’s Got Talent,” on Thursday, to cheer up the performers ahead of the semifinals. They performed their latest hit “Boy With Luv” live on stage, earning a standing ovation from the competitors and judges alike. The song currently sits on No. 59 of the Official Singles Chart Top 100.

A special congratulations goes to member Jin, who became a member of the Unicef Honors Club by having donated over 100 million won ($83,900) in total, according to Unicef Korea. Jin had been making regular donations from May last year without revealing it to the public, but agreed to come forward with his club membership, believing that “good deeds become bigger when they’re shared.”

BTS also held a collaborative campaign in November 2017 under the “Love Myself” banner to protect children all over the world from violence.

Bang, the head of Big Hit Entertainment, was named the International Music Leader for the second time on Thursday by Variety in its list of 35 prominent figures in the global music scene who have had a meaningful mark in shaping the contemporary music. This year’s report focused on online streaming, which the magazine believes is “bringing music and the businesses around it to previously under-optimized territories.”

“There can be a tendency in the United States to look down at the rest of the world, and when we least expect it, along comes a ‘Gangnam Style’ or ‘Despacito’ or BTS to make us realize just how much we don’t know, and how much great music is being made off of our radar and yet at the same time, thanks to streaming, right under our noses,” the magazine reported, referencing two of K-pop’s biggest successes.

“Bang’s Big Hit Entertainment already boasts the world’s biggest band in BTS, whose new album ‘Map of the Soul: Persona’ tied a Beatles record as the first group to score three No. 1 albums in under a year,” Variety explained.

BTS will continue its world tour series after this weekend’s performances.