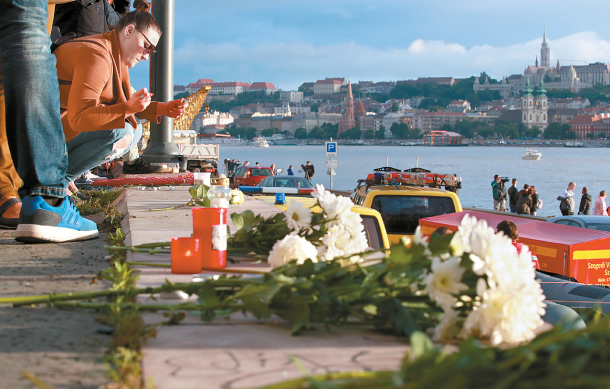 Local residents and tourists lay down candles and flowers on the bank of the Danube River in Budapest Thursday evening to mourn the Korean tourists who died or went missing when their tourist boat sank after colliding with a larger boat on Wednesday night. [YONHAP]

A rescue team of nine divers from Korea arrived in Budapest on Friday to join the search for the 19 missing Korean passengers in the Danube after a tourist boat capsized in the river Wednesday.

“As soon as the team arrives on site, they will try to join the search in the water,” an official from Korea’s Foreign Ministry told reporters on Friday morning.

“The Interior Minister of Hungary also said that authorities in Hungary will try to lift the boat from the riverbed as soon as possible, so we will have to see if the weather and conditions get better to allow that.”

Korea’s Foreign Minister Kang Kyung-wha, dozens of officials of the ministry and members of the Korea Coast Guard, the National Police Agency and National Intelligence Service were dispatched to Budapest Thursday to respond to the accident.

“We are deeply thankful for the cooperation by Minister Peter Szijjarto and the Hungarian government,” Kang said in a joint press conference with Szijjarto in Budapest on Friday. “We have visited the site and received reports on the latest updates on the search and rescue work. We will work hard together to find the missing as soon as possible.”

“We convey our deepest condolences to Korea and the people of Korea,” said Szijjarto. “We discussed details of the rescue and search work. Korean divers will be joining the local divers on site. We are hoping for good results from the joint efforts to search for the missing.”

A riverboat carrying 33 Koreans and two Hungarian crew members on the Danube collided with a larger ship near Budapest’s Parliament Building and the Margaret Bridge on Wednesday night. The boat capsized and sank within a few seconds, according to Hungarian police.

Local rescue workers were able to bring 14 people to shore, though seven of them were confirmed dead. The remaining 19 Koreans and two Hungarian crew members were still missing as of press time Friday.

Of the seven dead, only two have been identified.

“Both of them are women in their 50s,” an official of Korea’s Foreign Ministry told reporters Friday. “They were identified because they had some form of identification with them. A total of 43 relatives of the victims are on their way to Hungary and will help identify the bodies as well.”

The ministry said it also dispatched a number of forensic experts with experience from the 2014 Sewol ferry disaster.

“There is the possibility that some of the missing may be inside the boat, so we are requesting a speedy process with search and possibly salvaging the boat out of the water, but the conditions are apparently bad because it had rained for days and the river had become muddy and unclear,” said the ministry official. “We have also requested assistance from surrounding countries where the Danube flows to, such as Serbia, Croatia, Bulgaria and Romania, to help with the search work.”

But local media outlets in Hungary have reported on the dangers of diving into the river in its current conditions.

“According to the expert, [who asked not to be named,] the position of the ship makes it even more difficult to move and research, because along the pillar of the Margaret Bridge, the river accelerates, and the stream is stronger,” reported Index, a Hungarian media outlet, on Friday. “The former industrial diver said he [would] not enter the hull in the current state.”

The boat, called Hableany, is believed to be on the riverbed near the Margaret Bridge about 16 feet below the surface of the water. It was a two-story boat about 90 feet long with a capacity of 45 people for sightseeing cruises. It was the smallest boat operated by Panorama Deck, which operates a number of tourist boats on the river.

Divers in Korea with experience from the rescue effort during the Sewol ferry disaster told the JoongAng Ilbo that searching for missing passengers in a river would be more difficult than in the sea.

“Because the sea has tides, there is a time period where divers can focus on the search work inside the boat without having to fight too hard against the water current,” said Hwang Byung-joo, a diver who searched for passengers on the Sewol ferry, which sunk off the coast of South Jeolla. “But a river has no such time period and the narrower the river, the stronger the current. It is a harsher condition to dive and rescue. And in this case, even more so because the river has been muddied by days of rain.”

Hungarian authorities are investigating the reason behind the collision. They arrested the captain of the larger boat, the Viking Sigyn, which, according to CCTV footage, appear to ram the Hableany from behind near the Margaret Bridge on Wednesday night.

“The captain is a 64-year-old Ukrainian and we are investigating,” Szijjarto said in the joint press conference. “We will uncover everything we can about the collision.”

According to a witness, the accident took place within seconds, and for a while no one seemed to notice what happened.

“I was standing at the port on the Danube, watching the Hableany making its way toward me,” Seok Tae-sang, a Korean tour guide with 15 years of experience in Budapest, told the JoongAng Ilbo on Friday. “There were about 20 people on the deck of Hableany, and I saw people sitting inside the boat, one story below the deck. When the larger boat came up from behind and collided with the Hableany, the Hableany just turned over and it simply sank, like it got sucked under the larger boat.

“There was no time to hear any screams, it just sank very quickly,” he said. “To my eyes, it looked like the boat was split in half before it sank. And the larger boat that hit the Hableany just passed on and then another tourist boat passed over the area after that.”

Seok was leading another tour group at the time and waiting for his customers to board a boat at a dock. He said he called the authorities immediately, and boats stopped operating about 10 minutes after the collision.

South Korean President Moon Jae-in spoke with Hungary’s Prime Minister Viktor Orban over the phone on Thursday, and requested Hungary’s full support for the search and rescue work. Orban told Moon that they intend to salvage the boat and that more than 200 divers and medical workers are at the site. “Our thoughts and prayers go out to the families of the victims,” Orban wrote in a letter to Korean Prime Minister Lee Nak-yon, according to Zoltan Kovacs, Orban’s spokesman. “We stand together with the people of South Korea in these most difficult moments.”