Koreans return to the land as other jobs scarce

Koreans return to the land as other jobs scarce 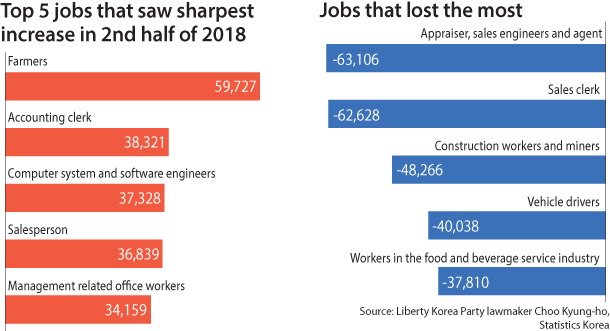 With economic growth slowing and the job market weak, many people are opting to farm.

In the second half of 2018, almost 60,000 people took jobs in agriculture. The vast majority were involved in the growing of crops.

JoongAng Ilbo on Monday asked Rep. Choo Kyung-ho of the opposition Liberty Korea Party to analyze the employment status of workers during the second half of 2018.

According to the data, the number of workers growing crops increased by 59,727. Among 153 jobs surveyed, the fastest-growing category was agriculture. It seems a downward trend may have been snapped. Agricultural employment had been in a steady decline through 2016.

About half the farming jobs added were simply people helping out their families.

More than 32,430 were unpaid workers who spent more than 18 hours a week working on family farms.

“In short, the job market is not good, so the number of household members helping their families in farming areas have increased,” said Choo. “They do not receive a fixed amount of monthly income, so what they do is far from being a high-quality job.”

He added that jobs related to manufacturing are on the decline, and the return to the land is a sign that the virtuous circle of employment, where companies invest and new jobs are created, is not working.

The second-largest increase in job numbers was for accounting positions, where 38,321 jobs were created.

Sales and management positions were also on the rise, as were positions in the health care sector.

The health and welfare service industry was one of the top 10 job categories in terms of growth in the second half of last year. This is an area in which the Moon Jae-in government has invested heavily.

Due to weakness in the property market, construction jobs and construction engineering jobs were on the decline. Due to the restructuring of the automobile and shipbuilding industries, the number of workers in manufacturing also fell.

The number of sales clerk positions fell by 62,628, and automobile driver positions, including chauffeurs, decreased by 40,038.

Also in the top 10 list for declines were jobs related to food, housekeeping and infant care.

“Despite the government’s intentions, the increase of the minimum wage has reduced the number of jobs for vulnerable people and even lowered the income of the bottom 20 percent,” said Kim Nak-nyeon, an economics professor at Dongguk University.

Some categories did well despite the rise in the minimum wage.

The number of janitors and ticket inspectors increased by 17,649 and 16,758, respectively.

“Finding the accurate cause [for the increase in janitors and ticket inspectors] by only referring to the data of Statistics Korea is limited,” said an official at Statistics Korea.

“At this point, we believe the government job policies for senior citizens have worked positively,” the official added.

The number of caregivers and pet helpers rose by 13,178, while delivery person positions increased by 11,467.

The growth in these areas is related to the recent increase of single-person households. But as people chose not to marry and have children, the number of school and kindergarten teachers as well as wedding planners fell accordingly.