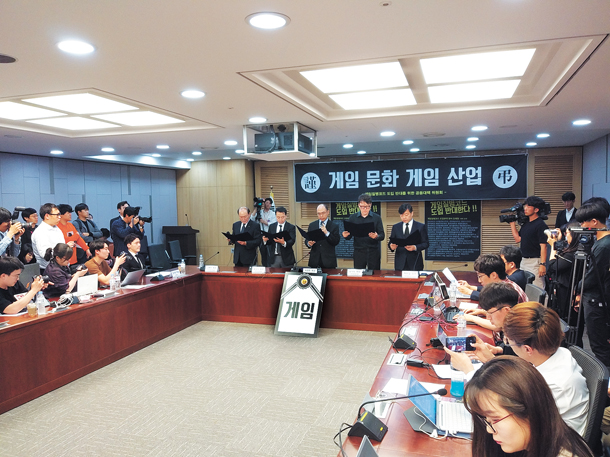 Chairman Wi Jong-hyun reads a pledge on behalf of the committee of 85 organizations Thursday, opposing the classification of gaming addiction as a mental disease. [KO JUN-TAE]

After the World Health Organization (WHO) voted to classify gaming addiction as a mental disorder, two very divergent views emerged in Korea, and a showdown is in the offing.

If it were a game, it would probably be called the Battle of the Ministries.

Last week, a decision-making committee at the World Health Assembly unanimously approved gaming addiction to be listed as a mental disorder in the new “International Classification of Disease, Eleventh Revision” (ICD-11).

Since then, Park has not made any statements contradicting his earlier sentiments.

Over the years, the ICD has served as a diagnosis guide for doctors and the basis for health insurers in providing reimbursement for policyholders seeking treatment.

Shortly after the passage of ICD-11, the Health Ministry said it will be working on a schedule for the new Korean Standard Classification of Diseases and Causes of Death (KCD) to reflect the new standard.

The contents of KCD, revised every five years, can only be negotiated starting 2025, according to the Health Ministry. Statistics Korea ultimately decides on revising and approving every renewed KCD.

It is expected that new disease classifications, including a designation on the gaming addiction, could come into force in Korea around 2026 after being run through the country’s regulatory processes.

Numbers show the Health Ministry is not alone in greeting the WHO’s decision.

According to a Realmeter poll of 6,187 people conducted early last month, 45 percent of respondents said gaming addiction should be treated and controlled like alcohol, gambling or drug addiction.

Only 36.1 percent of the survey respondents objected to gaming addiction being classified as a disorder, saying it would be an excessive regulation of entertainment.

Some medical experts are also on the Health Ministry’s side, as gaming addiction has been shown to cause significant damage to the brain.

“When people play games, their brains show similar changes to when they are on addictive substances like heroin,” said Kim Dai-Jin, a psychiatry professor at the Catholic University of Korea, last month.

Kim found in 2016 that playing video games, especially violent ones, can trigger aggressive behavior and lead to dangerous thoughts. He is one of the leading medical experts in Korea arguing that gaming disorders can be a threat to health.

The Culture Ministry begs to disagree. It filed an objection to the WHO’s determination.

Minister of Culture, Sports and Tourism Park Yang-woo, a long-time supporter of the gaming industry, said in a press conference last month that the ministry is opposed to the WHO’s move.

“Research conducted over five years shows that the primary cause of gaming addiction is not the game itself; rather, it seems to be academic stress and other social and psychological factors,” Park said.

“The social value of the game must be looked at again, and the government needs to work with the gaming industry to create a healthy gaming culture.”

Park cited research by Konkuk University Prof. Jeong Eui-jun unveiled at the Nexon Developer Conference in April. The results indicate that only 1.4 percent of 2,000 adolescents remained addicted to games after five years.

The Culture Ministry is backed by numerous gaming industry officials and organizations.

A committee of 53 organizations and 32 universities announced during its launch ceremony Wednesday at the National Assembly that it opposes the WHO’s ruling, as it could cause a downturn in the domestic gaming industry and gaming environment.

According to a report published last year, a number of regulations expected to follow since the ratification of ICD-11 will negatively influence the gaming industry, like how the tobacco industry struggled after the WHO codified smoking addiction as a disease in 1980.

“We are trying to proudly fight against those who claim gaming is not part of a culture,” said committee chairman Wi Jong-hyun, an economics professor at Chung-Ang University and president of the Korea Academic Society of Games.

Wi said the committee will meet with Health Ministry officials to fight their move and form a social “influencer” task force to initiate a nationwide campaign to resist the KCD from being revised without enough discussion.

Vice ministers from both ministries met Tuesday and decided to form a committee with representatives from related sectors to find a “reasonable solution” that would minimize the worries of the gaming industry while promoting a healthy gaming culture.

The ministries previously announced they will form their own bodies to address the WHO’s recent decision and balance the interests.

A day later, Prime Minister Lee Nak-yeon said in a meeting that the government will work to reach a “wise decision” that balances demands of the gaming industry and the need for instituting a healthy gaming culture, adding the country has enough time to prepare itself before the new classification comes into effect.

“Expectation and worry are simultaneously arising within the country,” Lee said.

“The expectation is that we can effectively prevent and cure gaming disorders through organized examination and research, while the worry is that the measure causes the gaming industry to contract in size.”