Queer Parade in Seoul is the biggest yet

Queer Parade in Seoul is the biggest yet 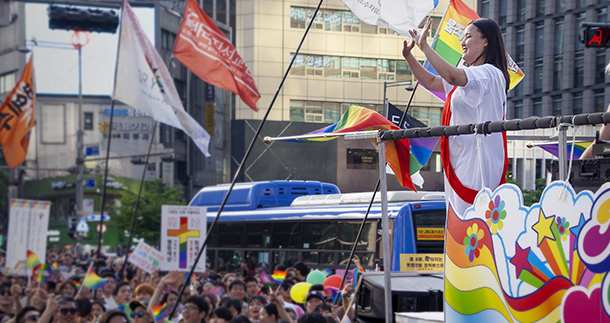 The Queer Parade passes through Gwanghwamun, central Seoul, on Saturday evening. Some 80,000 people attended the parade, according to the organizerĄŻs estimate. [JEON TAE-GYU]

The 20th Queer Parade was held on Saturday in central Seoul, the biggest gathering for the LGBTQ community in Korea since it began in 2000. Some 80,000 people gathered in Seoul Plaza in front of the Seoul City Hall to take part in the annual get-together. They paraded 4.5 kilometers (2.8 miles) from Seoul Plaza to Euljiro, Jonggak, then through Gwanghwamun for the first time.

The 20th Seoul Queer Culture Festival kicked off earlier in the month with a series of lectures and the first Pink Dot festival on Friday. The Pink Dot festival, in which some 3,000 attendants wore pink outfits to send the message “Everyone is equal and can come together as one under the pink light,” is an LGBTQ tradition that started in Singapore and spread to other countries, such as Japan, Taiwan, Canada and Britain.

The organizing committee estimated that 150,000 people attended Saturday’s series of events: 70,000 in Seoul Plaza and 80,000 in the parade, which were considered the highlights of the Seoul Queer Culture Festival. Seventy-four booths were set up to help raise awareness of the LGBTQ community, including booths by feminist clubs from universities, the Canadian Embassy, Google Korea, Lush Korea and the Justice Party.

“We want to show everyone that sexual minorities are here, living among us,” Kang Myeong-jin, head of the organizing committee told the press on Saturday. “We are aware that there are people who oppose us, but we believe that it’s important to form an environment where everyone lives in harmony and peace.”

The parade, which is referred to as the Pride Parade in English, began at 4 p.m., with the “Rainbow Riders” on motorcycles taking the lead, followed by 11 parade cars. Although there were concerns that this year’s festivities would see counter protests, there were no major conflicts. Anti-gay protesters sat across the street from Seoul Plaza in front of the Seoul City Council building holding a rally they named “Love is Plus,” but did not come in direct contact with the participants of the Queer Parade.

“It’s really nice to see that everyone looks so free and colorful,” said university student Kang So-yeon. “I have some friends who are [sexually minorities], and I think it’s right to accept and support them. I plan on coming [to the parade] in the future as well.”

“I like to see that everyone is very outgoing and happy, but I also think that the overall atmosphere is somewhat suppressed compared to the parade in my country,” said Martinique Ummels, a tourist from the Netherlands. “I think that it would be OK if it was a little more outspoken.”