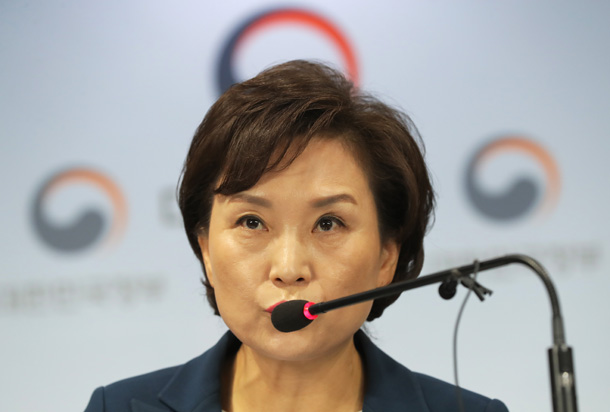 Land and Transport Minister Kim Hyun-mee announces a redevelopment plan to help ease a housing shortage in Seoul and the metropolitan area on May 7. Earlier, when a reporter asked about the lack of measures to meet the housing demand in Gangnam, southern Seoul, she smugly responded, “Do you like Gangnam [that much]?” [YONHAP]

LEE ESTHER
The author is a welfare and administration team reporter at the JoongAng Ilbo.

“I felt like I was rebuked for daring to buy a home in Seoul when I was a mere ‘dirt spoon,’” lamented my friend. She recently gave up in her quest to buy a new apartment. Because of the Moon Jae-in administration’s real estate regulation, she could not borrow the intermediate payment. The smallest unit — 83 square meters (890 square feet) — was over 900 million won ($755,350). “I could not afford it even by bringing a lease deposit, savings, credit loans and my soul,” she said.

The mother of a 7-year-old boy, she has been working hard. Without any help from her family and in-laws, she and her husband used savings and loans to get a deposit-based lease. She also gave up having another child because she wanted to save up to buy a house.
Yet the dream of becoming a homeowner was unreachable. “I am like a slave who cannot live far from work. When I save up 100 million won, the price rises to 500 million won. When I save up 200 million won, it goes up to 1 billion won. I am not looking to make speculative investment or want to live in Gangnam,” she sighed.

Another friend of mine bought a 109-square meter apartment when she got married five years ago. Her parents and in-laws gave the newly-weds a hefty sum of money. The apartment price continuously rose to her satisfaction. She recently won the ownership of a new apartment in Gangnam in a drawing. On top of her savings, she got a loan by mortgaging her existing apartment, and her parents will help out with the rest. “New construction sales are cheaper than market prices by 200 million won to 300 million won, so I can definitely make money when the construction is completed.”

The government raised taxes and made loans more strict, but they were no obstacle for the rich. Because the sale prices are high, getting a loan is not easy. So those who already have homes and have cash find it easier to buy more. Regulations ended up helping investments by people like her.

At a recent Ministry of Land policy seminar, participants said the government’s housing policy was successful in stabilizing real estate prices and reinforcing housing welfare. Over the past five years, the housing price increased in Seoul was 18.9 percent — considerably lower than London’s 39.6 percent, Berlin’s 63.1 percent and Sydney’s 54.8 percent.

This year, half of the newly constructed apartments in Seoul were priced more than 900 million won. Yet the ministry seems to think it is affordable. I wonder which one of my friends the government has really been trying to catch with real estate control measures.