LG U+ sees AR as a 5G imperative, invests big

LG U+ sees AR as a 5G imperative, invests big 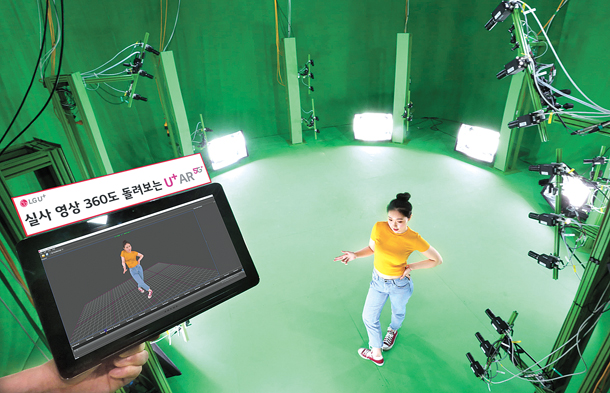 A model demonstrates the process of creating an augmented reality (AR) video in 4K resolution that can be viewed from 360 degrees at a U+ AR studio in Seocho. [LG U+]

LG U+ is betting big that augmented reality (AR) is the way to killer 5G content.

The company said it will invest 10 billion won ($8.4 million) into developing AR technologies and videos this year.

It said it will be establishing a second studio and creating 1,500 AR offerings this year. The content will be broadcast through the carrier’s 5G service.

In one demonstration Friday, a pop singer danced on the screen as if she were inside the press briefing room. Her image could be viewed from a number of angles.

The quality of the video was very high on mobile phone screens and the pop star seemed as if she was actually standing on solid ground inside the room. The image wasn’t just floating in the air.

LG U+ said it used 30 4K cameras in the studio to capture high-definition video from 360 degrees. The special filming technology - volumetric video technology - was sourced from Los Angeles-based 8i in an exclusive partnership, LG U+ said.

The technology transforms video from an array of cameras into a 3-D image that can be viewed from any angle.

At present, the U+ AR app and all the content is offered to 5G service subscribers of LG U+. According to Kim Min-gu, director of the AR service unit at LG U+, it takes 130 gigabytes of data to create a one-minute-long AR video in 4K quality, so the content needs to be highly compressed - to about 600-megabyte level - to be streamed through 5G phones.

“Viewing the content on LTE phones could be possible if we downgrade the content a bit, but because our goal is to provide the most immersive AR video, we think the content is fit for 5G subscribers,” said Kim Jun-hyung, vice president of LG U+ 5G service group.

Apart from dancing videos, there are also at home workout videos and entertainment videos from comedians. The carrier said that while the offered content in the early stage will be focused on younger people - aged 10 to 20 - it will develop more programing targeting those in their 30s and 40s. The plan is to invite sports stars to participate in videos.

The U+ AR app was formed in April, in time for the commercialization of 5G, and currently has roughly 750 programs available for streaming. The content is free for now, but in the longer term, “premium content can be offered as a paid service,” said vice president Kim, though the criteria for charging was not disclosed.

The carrier is also hoping its specialized studios will be used by outside entertainment companies and individual creators, to help in the development of the AR market overall.

As AR develops as a product, LG U+ said its 4K 3-D AR content can also be used in various scenarios, like on home shopping channels. Consumers will be able to look at the actual product before purchase using phones or AR goggles.