Music in PyeongChang settles down for a story

Music in PyeongChang settles down for a story 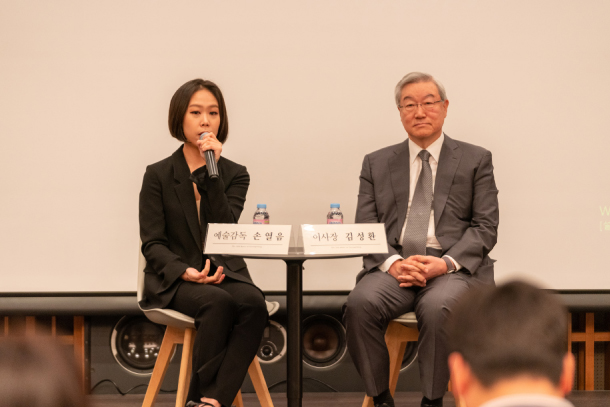 Pianist Son Yeol-eum, who is also the artistic director of Music in PyeongChang (MPyC), formerly known as the PyeongChang Daegwallyeong Music Festival held biannually in Pyeongchang County, Gangwon, says she wants to start this year’s classical music festival like a fairy tale - approachable for the public but also able to strike sensitive chords with audience members.

After taking on the directorship of the festival in March 2018, Son has successfully organized one summer and one winter edition of the festival, making a strong debut as a young artistic director.

However, the 33-year-old says she has been anxious all year, worried that she could get hit by the “sophomore Jinx” this time around. She tried to free herself from the thoughts and attempted to tell a “different story” for the 16th MPyC.

“You know when people say, ‘it’s a different story,’ in the middle of a conversation, it grabs your attention,” said Son, during a press conference for the festival last week at ODE Port in southern Seoul. “The festival is in its 16th edition and I want to grab people’s attention by showing them something different.”

“A Different Story” is the title of this year’s MPyC and Son stressed that she’s made a few changes to the 10-day festival that kicks off on July 31 with the main venue at the Alpensia Resort in Pyeongchang.

First, since the festival has been planned out like a story book, Son attempted to create 12 chapters out of the 10 days, starting with the first chapter, “Once Upon a Time.” One piece of music featured in the first chapter is Russian composer Shchedrin’s “Three Shepherds.” According to Son, she wanted this specific piece to start the first concert because it is like the beginning of a story book.

“Shchedrin told me that he composed this piece by thinking about the sounds of nature, which the festival is also known for,” said Son. “It fits perfectly with the ambiance of the festival in the beautiful province of Gangwon.”

The second “Never Enough!” chapter will include music that is familiar, but new to MPyC, while the fifth “Told, Untold” chapter will include unfinished works or works that saw the light of day only after the composer’s death such as Lekeu’s “Piano Quartet,” Shostakovich’s “Viola Sonata” and Mendelssohn’s “String Quintet.” The last chapter is titled “Happily Ever After” and features pieces from great composers with anniversaries this year, such as Mendelssohn, Vladigerov and Berlioz.

Another distinctive difference from previous years is that Son decided to abolish the festival’s school system that gathered students from across the globe to receive lessons from internationally acclaimed virtuosos during the festival. Instead, MPyC decided to open up its masterclass, giving more people access for free. Festival orchestra members will also visit several elementary schools across Gangwon to meet with orchestras, hold master classes and a concert together with the students.

Son also wanted to take this year’s festival as an opportunity to introduce contemporary music she personally enjoys listening to.

“This is bit of a challenge for me as well because I’ve heard the recordings of this music, but never live,” Son said as she introduced six “very progressive contemporary composers” including Ivan Vukosavljevic, Alexander Kordzaia and James Alexandropoulos-McEwan. All showcases are free to attend.

“For classical music festival organizers like myself, introducing contemporary music is an area we always want to attempt,” said Son. “It’s like a passion and a mission.”

For more information about this year’s Music in PyeongChang, visit mpyc.kr