Professional dancers take the audience for a spin in 'Minus 7'

Professional dancers take the audience for a spin in 'Minus 7' 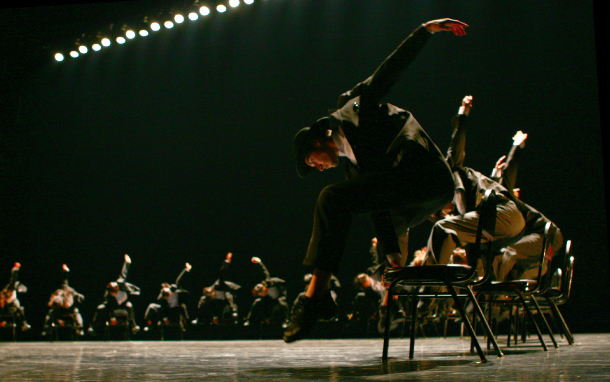 Israeli choreographer Ohad Naharin's "Minus 7" will be staged by the Universal Ballet Company on June 29 and 30 at the Seoul Arts Center, southern Seoul, as the finale piece of the 9th Ballet Festival Korea. [UBC]

Usually, dancers are in complete control when they are on stage. They know what their next step is and are fully aware of the moves their partner will make and how they fit together. But Israeli choreographer Ohad Naharin’s "Minus 7" takes away that safety net for the performers, sending them on a "white knuckle ride" across the stage.

"Being unable to know what to expect really puts you in a tense situation," said Liang Shih-huai, a soloist at the Universal Ballet Company (UBC) who will be one of the dancers for "Minus 7," the finale piece for this year’s 9th Ballet Festival Korea.

"Depending on who you invite onto the stage, you have different experiences. If the audience member really knows how to release his or her energy on the stage to the music, the experience becomes so exhilarating. But when that energy is too much or too little, the dancers can have a hard time."

"Minus 7" consists of excerpts from three of Naharin’s pieces — "Mabul" (1992), "Anaphase" (1993) and "Zachacha" (1998). The final piece, "Zachacha," is an impromptu performance that sees dancers venture into the audience and pick partners at random to dance onstage to an EDM version of "Somewhere over the Rainbow." 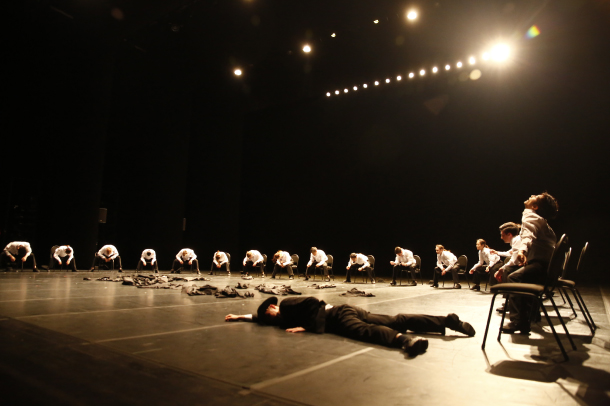 The performance was put together by Naharin for UBC and the show premiered in Korea in 2006 at the Seoul Arts Center. At first, shy Koreans didn’t know what to do under the spotlight, but soon more people began to enjoy the experience. Since then, UBC has staged the piece a number of times. Since "Minus 7" is so refreshingly different, many aficionados became fans, going to performances with the earnest desire of being picked out of the crowd by the dancers.

The latest version that will be performed for the Ballet Festival Korea will be staged by choreographer Guy Shomroni, who began his dancing career with the Batsheva Dance Company where Naharin serves as a House Choreographer. Shomroni is also one of the teachers of the Gaga, a dance movement language created by Naharin. Prior to the performance, which will be staged on June 29 and 30 at the Seoul Arts Center in southern Seoul, Shomroni visited UBC to work with the dancers. "Minus 7" will be performed on the same stage as choreographer Hue Young-soon’s "Imperfectly Perfect" as the finale of the Ballet Festival Korea.

When the Korea JoongAng Daily visited the rehearsal room at UBC in eastern Seoul last week, Shomroni and the dancers were practicing the "Anaphase" part of the performance. The dancers arrange themselves in a semicircle with a chair each. They start to remove their clothes, black pants, white shirt, black jacket and a black hat as they dance to Naharin’s adaptation of Jewish traditional Passover song "Echad Mi Yodea."

"The song is in Hebrew and it comes from the Jewish tradition of Passover," said Shomroni. "The dancers throw off their clothes to the song, as if they are freeing themselves from something." 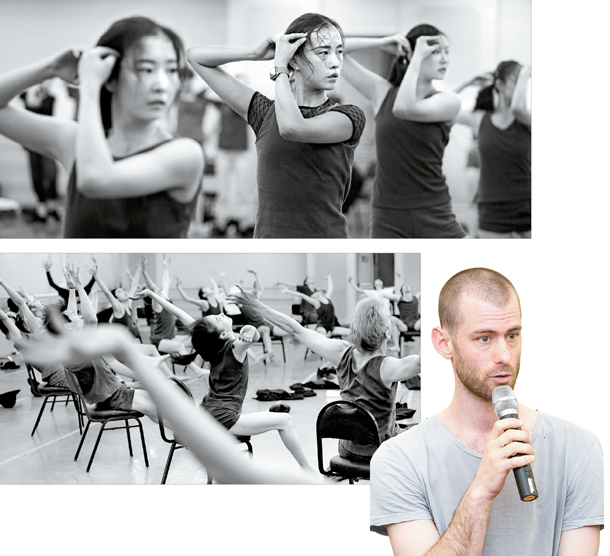 Top and above: Dancers from the Universal Ballet Company (UBC) rehearse for "Minus 7" with choreographer Guy Shomroni, right, who visited Seoul to stage Ohad Naharin's work with the company.

While dozens of dancers get their kit off, even flinging their shoes into the air, there’s one man in the last row who can’t take any of his clothes off, almost as if something is stopping him. That role is performed by Liang.

"I performed ‘Minus 7’ several times but it’s my first playing this role," he said. "I think this scene is the most strenuous part in ‘Minus 7.’ The dancers build up the emotion and then burst it, whereas this one man continues to fail. It feels like you are stuck in this routine that is unbreakable."

Even for experienced professional dancers, Naharin’s pieces are not exactly comfortable to perform.

"Usually, there’s an answer to how you do the choreography," said Liang. "When I do something differently, a choreographer or a stager will come and say: 'The knee should be bent like this,' or 'The line or the arm should look like this.' With Naharin’s works, it’s not like he doesn’t care, but it feels like Naharin is allowing more freedom for the dancers. It’s not a matter of right or wrong, but he gives more freedom to the individual dancers I think. It can sometimes be challenging."

Lee Da-jung, a demi-soloist at the company, thinks that is the charm of "Minus 7."

"It feels like Naharin adopted everyday movements into the choreography of this work," she said. "It is very carefree, yet static at times and unified. This rhythm and hidden rules are really attractive for the dancers."

Naharin has produced other pieces that use excerpts from his original works. According to Shomroni, although he is unsure why Naharin chose those three pieces to create "Minus 7," they will certainly help Korean audiences understand Naharin’s extensive choreography style.

But why is the work so popular that there are fans that continue to come back to watch the same thing over and over again?

"As a piece that is composed of small pieces of other works," said Shomroni, "audiences can discover unique qualities when observing ‘Minus 7.’ You can watch them again and again without losing enjoyment on the second, third and fourth time. Audience members can discover something that you didn’t see the first time."

Meanwhile, the 9th Ballet Festival Korea kicks off at the Seoul Arts Center on June 18 and runs until June 30, presented by about 10 dance companies and troupes in Korea.

The opening piece will be staged by the Korean National Ballet, which will perform classical pieces "Mata Hari" on June 18 and 19 followed by "Giselle" on June 22 and 23.

For contemporary dance fans, Wise Ballet Company's "Intermezzo" on June 23 and 24, Dark Circles Contemporary Dance's "Into the Silence" on June 20 and 21, Shin Hyun-ji B Project's "Concerto" on June 29 and 30, or Kim Yong-geol Dance Theater's "Le Baiser" on June 24 and 25 will be good picks.