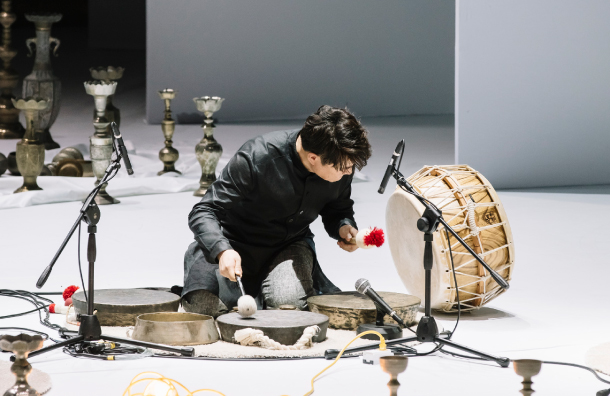 This year's Yeowoorak Festival will kick off on July 10 and run until July 14 at two different venues including the Blue Square and Hyundai Card Understage, both in Hannam-dong, central Seoul. Above is "Hollim; Immersion" by Jangdan DNA, which was staged at last year's festival. [NATIONAL THEATER OF KOREA]

For the past 10 years, the National Theater of Korea has been making efforts to show the beauty of traditional Korean music by showing how it can harmoniously work with other genres such as classic and jazz music through the annual Yeowoorak Festival.

Unfortunately, since the National Theater is currently going through a grand renovation, the organizers decided to take the opportunity to head outside the theater, take the festival experience to people who have never been to see or ever heard of Yeowoorak, and to conveniently market the event's 10th anniversary at the same time.

Since it's the 10th year, the organizers said they want to approach a wider audience by holding the festival at more popular locations - Blue Square and Hyundai Card Understage - and promote the festival as if it were their first.

The theater got together two of the festival's former artistic directors, pianist Yang Bang-ean and jazz vocalist Nah Youn-sun, alongside its current artistic director Won Il to put together a five-day festival filled with concerts. The three of them organized a concert each to make sure "visitors newly discover the charm of gugak and no longer consider the genre as musty old music," according to the organizers.

On July 10 at the Blue Square, Yang will bring in his band of young Korean and Japanese artists who perform gugak and western musical instruments to present a concert titled "Passion & Future." The band will perform easy music such as soundtracks from popular animated films and documentaries. Meanwhile, on July 10 and 11 at Hyundai Card Understage, Nah will be calling two artists, daegeum (traditional Korean flute) player Lee A-ram and French flutist Jocelyn Mienniel together on stage for the "After Wood & Steel" concert. Both concerts start at 8 p.m.

On July 12, Won will perform with 12 other artists to showcase how gugak can also be "hard rock" at the Blue Square at 8 p.m.

Finally, on July 14, various artists who have performed at previous editions of the festival will return, including Gongmyeong, a Korean traditional percussion ensemble; Uhee, a traditional Korean performing arts group; and the nine-member ska band Kingston Rudieska, among others. For more information, visit ntok.go.kr or call (02) 2280-4114.