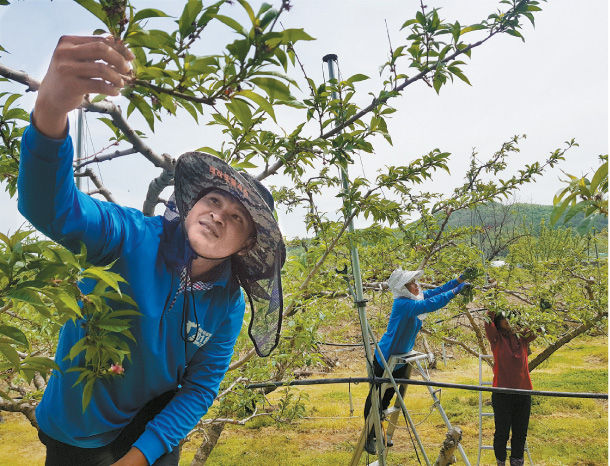 Foreign workers from Cambodia pick peaches on a farm in Yeongdong County, North Chungcheong, on May 9. [CHOI JONG-KWON]

Earlier this year, the JoongAng Ilbo visited a watermelon farm in Yeongyang County, North Gyeongsang. It was a good-sized property - 49,500-square meters (12.23 acres) - and the farmer employed five Vietnamese workers to help him run it.

When the newspaper visited again in May, the number of Vietnamese workers had risen to 14, including nine part-time workers.

“I have no choice but to employ part-time foreign workers,” said the watermelon farmer. “Unless I am planning on closing down my farm, it is impossible to finish production during the farming season with the help of seasonal workers that the government provides.”

Foreign workers are filling gaps in the workforce in Korea’s rural areas caused by young people moving en masse to cities. The rural population is declining and Korea’s society is aging.

In 2015, the government started a pilot seasonal worker program to bring in manpower from abroad. Workers receive a C-4 visa for short-term employment, which, in this case, allows them to stay in Korea for 90 days.

The seasonal worker program recruits foreign workers from countries in a close relationship with Korea - Vietnam, Cambodia, Malaysia and Indonesia - or by inviting members of multiethnic families already in Korea to take up the work.

The Ministry of Justice announced on May 29 that 2,597 foreign workers were assigned to 41 local governments and cities around the country in the first half of 2019.

“Regardless of what’s legal and illegal, the competition to hire workers is fierce,” says the watermelon farmer in Yeongyang County.

A farmer who owns a peach farm in Yeongdong County, North Chungcheong, said that he had been working with his wife for a month in his 13,200-square-meter orchard.

“I have to finish the work by this month and wrap plastic around [the fruits],” said the peach farmer, who didn’t qualify for the program. “I am going to leave the rest that haven’t been tended to, even if it means losing profit.”

A farmer who grows potatoes in Inje, Gangwon, said he would hire Korean workers from an employment agency and pay 100,000 won ($84) to 120,000 won a day per worker. But if they were unavailable, he hires illegal foreign immigrants, who work for less.

The government was clearly on the right track with its seasonal worker program, he says - but hasn’t gone far enough. “We need to increase the number of foreign workers that are dispatched [to farms] and increase the period of their stay to six months,” said the potato farmer.

The fugitives seem to have better-paying jobs in mind. According to farms in Yeongwol County, which had over 27 percent of their seasonal workers run away from their designated farms, brokers took the foreign workers to better-paying jobs, mostly on construction sites, even if it meant going on the run immigration-wise.

The Ministry of Justice, in late 2018, announced that it would curb the number of seasonal foreign workers managed by local governments if more than a certain percentage the workers desert their duties.

Better management may be required. “Considering the increasing demand of [these workers], local governments should create a dedicated task force,” said Lee Hye-Kyung, a professor of the division of public officials at Pai Chai University. “We need to strengthen management by creating a public institution for metropolitan areas.”