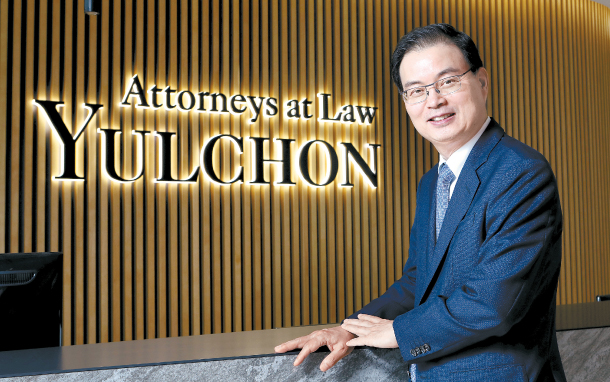 From Sept. 22 to 27, 6,000 to 8,000 lawyers from 130 different countries will descend on Coex in Gangnam District, southern Seoul, to attend the annual conference of the International Bar Association. It will be Seoul’s first time hosting the most prestigious international gathering of lawyers. To lead up to that special event, the Korea JoongAng Daily is running a series of interviews of managing partners of South Korea’s leading law firms to hear how they’re embracing globalization and what it means to the legal industry to think beyond borders. — Ed.

“We’re aiming for the real global standard,” says Yoon. “It doesn’t matter whether our lawyers are Korean or not. It’s all about competence. We tell the non-Korean lawyers in our foreign offices not to feel peripheral, and that if you guys do well, we’ll make sure to keep you in the front as core members.”

That strategy seems to be working.

At last year’s FT Asia-Pacific Innovative Lawyer Awards hosted by the Financial Times, Yulchon was named winner of the Most Innovative Asia-Pacific law firm award, becoming the only Korean law firm to have won an award four years in a row.
On March 21 this year, Yulchon’s honorary managing partner, Yun Sai-ree, was named Asian Law Firm Leader of the Year at the Asia Legal Awards, one of the most prestigious legal awards in the world.

In a recent interview with the Korea JoongAng Daily at the law firm’s office in Gangnam District, southern Seoul, Yoon discussed how Yulchon stands out from other Korean law firms in globalization and how it’s preparing for the upcoming International Bar Association (IBA) annual conference, set to take place in Seoul later this year.

A. We have six in total: in Vietnam’s Hanoi and Ho Chi Minh City; Shanghai, China; Yangon, Myanmar; Moscow, Russia; and Jakarta, Indonesia. Out of Korea’s five top law firms, Yulchon was the first to open an office in Vietnam and Indonesia.

Yulchon has helped various Korean companies enter the Vietnamese market since it opened an office in Ho Chi Minh City in 2007 and another office in Hanoi in 2010. The offices have provided legal advice in mergers and acquisitions, arbitration, litigation, project financing and transfer transactions, among other fields, drawing from our vast knowledge and expertise in Korea and Southeast Asia. In 2013, Yulchon received an appreciation plaque from the Vietnamese Embassy in Korea for helping Vietnam build an amicable investment environment for Korean companies. Yulchon has also signed memoranda of understanding with Vietnam’s central and local governments on strengthening cooperation to help Korean companies settle stably in the foreign market.

Among several deals in Vietnam we were involved in, Yulchon helped Mirae Asset Life Insurance acquire a 50 percent stake in the Vietnamese insurance company Prevoir Vietnam Life Insurance in 2017.

In Indonesia, Yulchon helped KB Kookmin Bank acquire new shares issued by Bank Bukopin to become the second-largest shareholder in 2018. Yulchon also advised the Industrial Bank of Korea on its acquisition of the majority of shares of Indonesia’s Bank Agris and Bank Mitraniaga in 2018.

We encourage our foreign lawyers not to feel peripheral and have faith that they can grow into core members of Yulchon. I don’t think Yulchon or any other law firm can call itself a truly global law firm if they only support lawyers of the country that law firm is headquartered in. When Korean law firms first opened doors here, foreign lawyers did most of the crucial work while Korean lawyers helped them on the sidelines. Ten to 20 years later, Korean lawyers have earned equal standing and have started to cooperate with foreign lawyers instead of merely playing a supporting role. I think the next step is to blur that distinction between Korean and foreign lawyers and make whoever is best in their legal practice the leader of that field.

The Financial Times named Yulchon the most innovative law firm in the Asia Pacific last year. How did you get recognized for innovation?

We’ve always tried to add innovation in our work and to help our clients access their needed legal advice in a smarter way. For instance, we developed an app for our corporate clients that tells them whether or not they would be violating antigraft laws by meeting a certain government official and gifting them with a present of a certain price or taking them out to a meal. All they have to do is fill out a simple questionnaire on the app, and then it tells them whether or not it’s legal.

I heard Yulchon has a legal research institute. How does it work?

The institute is in charge of organizing various forums that gather experts from all walks of life. We have forums on financial technology, artificial technology and also mobility, the last of which touches upon topics like smart cars and self-driving vehicles. Through these forums, we try to help our lawyers learn more about fields they’re unexperienced in, enabling them to concretely understand the needs of our clients and effectively offer them the legal help they need.

By meeting new people with diverse backgrounds, we gain insight and we learn faster than other law firms about rising new industries, and about which new companies may need our help in the future. We prepare those fields early on so when new clients actually come knocking on our doors, we’re able to provide the legal help they need right away. By then, we already know what issues they could be going through and how to solve them.

Are there any new legal fields that Yulchon is especially focusing on these days?

It’s not new, but we’ve been expanding our work helping domestic clients make real estate investments in foreign countries such as the United States, Japan, Britain, Australia, Southeast Asia and Eastern Europe, and help them restructure their overseas subsidiaries.
Our job is basically to help them receive a thorough understanding of foreign investment environments and how they can make the most efficient investment decisions. Yulchon has an extremely competitive edge in that field. For instance, Yulchon’s Real Estate & Construction Group advised FG Asset Management in its acquisition of the Australian Taxation Office Building in Albury, a city in New South Wales, Australia.

Yulchon was the first Korean law firm to directly hire people with severe disabilities. How did that decision turn out?

We currently have 12 disabled employees here doing various kinds of work like cleaning, sorting mail and copying documents. Unlike other major law firms, we chose to hire handicapped workers instead of paying the government levies for not employing them. And they’re doing really well. I think by having them here, other staff members and lawyers at Yulchon have grown more understanding of each other. Our decision to employ them is part of Yulchon’s fundamental philosophy that law firms should demonstrate social responsibility.

How is Yulchon preparing for the upcoming International Bar Association (IBA) annual conference?

I think this year’s IBA annual conference is a great chance to promote Korea, Korean culture, Korean companies and, of course, Korean law firms. We have a lot in store for lawyers visiting from all over the world, and we’re aware that for many of them, it’ll be their first time coming to Korea. We’re also preparing some cultural programs for their spouses who won’t be attending the IBA sessions but are still looking for fun in an exotic country.

One of many things we’re planning to provide lawyers attending the IBA conference is space at our coffee shop. Our office is a three-minute walk from Coex, where the conference will be held, and we have a spectacular view of the city and the Han River. During IBA week, lawyers are welcome to drop by our cafe and use it as a business lounge where they can handle any urgent emails or phone calls from back home while relishing a panoramic view of Seoul.

We luckily gained know-how on organizing functions for foreign guests last year through our participation in the 72nd Annual Congress of the International Fiscal Association in Seoul in September. Yun Sai-ree, our honorary managing partner, who at the time was Yulchon’s managing partner, chaired the plenary session of the congress.

What goal do you wish to achieve during your remaining term as managing partner?

I like to call it “smart growth.” Of course, I want Yulchon to gain more profit and attract more clients, but I think what’s really important is that we maintain our level of high-quality services. I don’t want Yulchon to suddenly add more attorneys just for the sake of making us appear like we’re a bigger law firm only to ignore keeping our services top-notch. One of the best things we hear from clients is that no matter who they work with at Yulchon, the quality of legal help is similarly high.