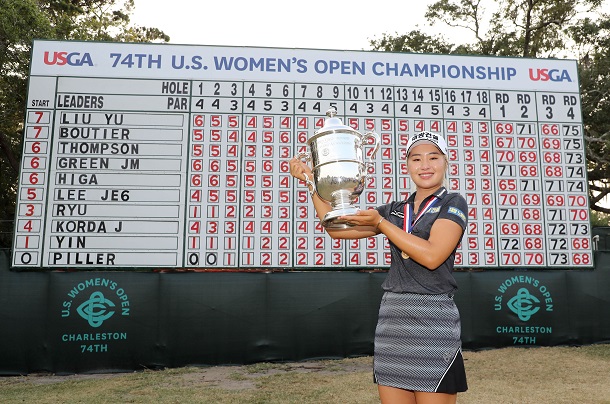 Lee Jeong-eun poses with the trophy after winning the U.S. Women's Open at the Country Club of Charleston in South Carolina on Sunday. [GETTY IMAGES/YONHAP]

Lee Jeong-eun picked up her very first LPGA Tour title at one of the Tour’s most prestigious tournament, the U.S. Women’s Open on Sunday.

By shooting one under par, 70, on the final day, Lee picked up a thrilling come-from-behind victory, finishing two shots ahead of the runners-up, at the Country Club of Charleston, South Carolina. Lee, who started the final round two shots behind the leader at sixth, made four birdies and three bogeys in the final round to finish the tournament at six under par, 278.

With the win, Lee took home the prize money of $1 million, the largest in tournament history, and continued Korean golfers’ dominance in majors this season. So far this season, Korean golfers have won both of the major tournaments that have been played — Ko Jin-young won the first major of the season, the ANA Inspiration back in April.

With Lee’s win, Korean golfers have won seven tournaments out of 13 competed this season.

After a dominant career on the KLPGA Tour, Lee made her LPGA Tour debut this season by topping the LPGA Tour’s qualifying tournament in November, last year.